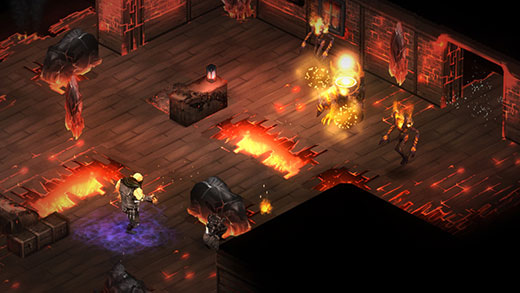 HIGH Making a difference in the lives of the people living in the game's hub.

LOW Repeatedly missing enemies despite having a high hit percentage.

WTF My sniper should take some sniping lessons sometime.

I loved the Super Nintendo version back in the day, even though it bloody well lied about an upcoming sequel in its closing moments. Or did it? Shadowrun Returns came out in 2013 to generally positive fan reception, so maybe the two decade wait was planned from the start? Either way, that game spawned DLC in the form of Dragonfall, now available as a standalone titled Shadowrun: Dragonfall—Director's Cut.

The first order of business in this tactical RPG is to create a new Shadowrunner from scratch, tinkering with their appearance, attributes and skillsets to create a protagonist that can talk their way out of any situation, blow the testes off a gnat at fifty yards, or hack any security system in the known universe without breaking a sweat.

Once created, it's time for a gentle introductory mission which sketches out his or her backstory, about how things went awry in the past and that it's time for a fresh start in the Flux-State of Berlin. Opportunity and anonymity abound alongside an old partner to help ease our hero into their new environment. What could possibly go wrong?

To keep it spoiler-free, let's just say that… things happen and it becomes the hero's mission to uncover what's going down in Berlin before they get wiped off the face of the planet. To start with, they'll need enough money to grease a few palms, so getting a decent cash flow happens by accepting odd jobs around the city concerning everything from assassination attempts to recovering heavily-encrypted data from massive corporations.

It's a fine tale, all said and done, with some decent characters sprinkled throughout and a high standard of writing from start to finish. There's also plenty of opportunity to connect with the core team of Shadowrunners who eventually come under the player's command, all of whom have various personal issues that can be addressed in whichever manner is deemed appropriate through dialogue branches. It's not all about being a career criminal, though—there's plenty of leeway for impromptu counseling and important life lessons between missions.

In terms of worldbuilding, Dragonfall does an excellent job of selling the Shadowrun universe in a convincing fashion. It's all about cyberpunk stylings at their finest with squalid, run down tenement blocks full of drug addicts and gangs rubbing shoulders alongside shiny corporate skyscrapers full of high tech security systems and tactical assault teams. Each location tends to have its fair share of loot or lore tucked away within their cavernous depths, and digging into these as deeply as possible is often a rewarding experience.

Metahumans including Orks, Trolls, Dwarves and Elves roam the streets, and magic is reasonably commonplace, as are cybernetically-augmented soldiers renting themselves out to the highest bidder. Then there's the whole issue of ‘decking', which involves plugging a user's consciousness into computer cyberspace to hack secure files and tamper with electronics. The downside of this is that Intruder Countermeasure Electronics can fry their brains to a crisp if they're clumsy enough to be discovered whilst rummaging around inside. This dystopian cyberpunk vibe maybe not feel quite as fresh and unique as it did twenty years ago, but it's all presented in an absorbing fashion with a keen eye for detail.

Considering the tasks ahead of them, the player's squad of Shadowrunners is going to be butting heads with enemies on a frequent basis. Combat is presented in an isometric tactical strategy format, with the player's allies and their foes taking turns to murder the hell out of one another whilst using cover to block bullets heading towards their spines.

The unfortunate thing is that these encounters grow stale far too quickly. The combat engine does the job, but lacks the presentation, flair and tactical considerations of more established tactical RPGs such as Fire Emblem or X-Com: Enemy Unknown. On the normal difficulty setting I found that nearly every fight involved simply getting behind cover and blasting away at enemies with little need to think things through. The occasional bit of flanking or spellcasting came in handy, but the critical path of battle is pretty much the same from start to finish—something that wasn't helped by having purchased nearly all the best (and surprisingly similar) gear midway through the game.

Oh, and the hit percentages seem wildly skewed at times, with characters suddenly unable to hit a stationary target two yards in front of them. While whiffing three shots in a row with an estimated 83% success rate is entirely possible (theoretically speaking) it's also pretty irritating when it drags the fight out longer than it should.

Shadowrun: Dragonfall has excellent writing which supports the whole shebang beautifully, but its sub-par tactical gameplay holds it back once the bullets and blades start flying. It's not bad, but the combat's about as vanilla as it gets for the genre. Anyone after an engaging tactical RPG may be let down by the shallow encounters, but those yearning for an engrossing world with rich storytelling will find a lot to like here. Rating: 7 out of 10


Disclosures: This game was obtained via publisher and reviewed on the PC. Approximately 17 hours of play was devoted to single-player modes (completed 1 time) and there are no multiplayer modes.

Parents: According to the ESRB, this game doesn't exist. Seriously, there's no rating for Dragonfall—but since there's a chunk of swearing, casual racism, drug use and all that kinda stuff it's a safe bet that— thematically if not graphically—kids should be kept away from it.

Deaf & Hard of Hearing: Should be no problems here, all the dialogue is presented in text format and as a turn based tactical game there are few if any moments where hearing audio cues in advance is important.