Who warmed these sandals? 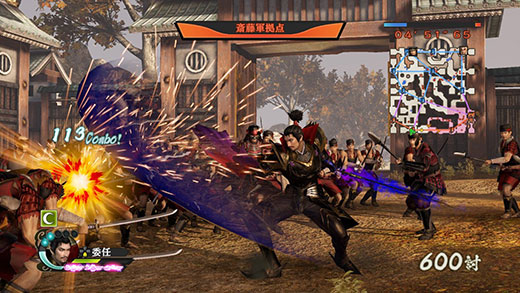 LOW Plodding through the protracted endgame of a custom campaign.

Omega Force's prolific Dynasty Warriors and its various spinoffs will likely be familiar to most semi-serious gamers at this point. There's a ton of them on the market, and they all share similar gameplay that involves rampaging around a battlefield, mowing down hordes of insignificant enemies en route to the player's objective.

The Empires subseries tries to weave a strategic layer on top of this hack-and-slash core, encouraging would-be generals to think about the political side of things as they progress—ensure ample supplies are available, determine which key regions to take out first, and perform a handful of other tasks when not murdering hundreds of goons.

There are two modes available, Conquest and Genesis.

Conquest allows players to take control of historical clans and achieve their particular ambitions, such as wiping another clan out of existence in the most violent manner possible, or simply trotting over to a nearby province.

Genesis mode second allows custom scenarios to be built and executed, and I spent most of my time here since it allowed for longer campaigns.

In between battles, player-elected magistrates will offer advice on how to best proceed with keeping the war effort in motion. Taxing the populace for much-needed supplies, heading down mine shafts to dig up gold, or forming alliances with enemy clans… there's a fair amount of options to consider during the downtime before each battle.

For instance, not putting enough troops in the field will make officers significantly weaker than the opponent officers, leading to getting smashed by even the puniest of enemies. It's also possible to build relations between officers so they can be freely switched in battle—a great advantage.

That said, the options between battles don't go far enough. Every choice is so obvious or limited that it feels more like ticking off a checklist than making do-or-die decisions that can seriously affect the outcome of a crucial skirmish. Also, it bears mentioning that the cut-scenes in this mode are insane.

At one point my Daimyo demanded to know why her sandals were warmer than usual. Turns out that another officer had been concerned for her health, and so warmed said sandals up inside her tunic. In another, my leader accidentally wound up marrying someone after rescuing them on the field with absolutely no further input from them on the matter. It's, uh, "riveting" stuff all around, and most of the cut-scenes are of similarly odd quality.

Aside from the two central modes, there's also a vault with some lovely artwork, music, and character biographies waiting to be unlocked. Be warned though—actually reading these biographies leads to horror. There's a stark difference between the cheerful, happy-go-lucky vibe of the game itself, and the cold, hard facts of history. Delighted by a character's amicable attitude and kindly demeanour? Chances are they probably got boiled alive after a failed assassination attempt, were married off at the age of twelve, or died of consumption by the time they were thirty. It's a curiously chilling contrast.

While it seems like Omega Force should have this formula locked down tight, the truth is that Samurai Warriors 4: Empires doesn't quite gel. It's a decent title to while away an afternoon with, but there are others in the series that deliver a better overall experience, and the fatigue that set in near the end of the campaign was tough to stave off. When I realized victory was still dozens of battles away, going through the Musou motions lost all appeal and I wound up grimly chewing through it rather than savouring each bite. Rating: 6 out of 10

Disclosures: This game was obtained via publisher and reviewed on the PS4. Approximately 20 hours of play were devoted to the single-player mode, and the game was completed. There seems to be local co-op, inaccessible without a second pad, and no online play.

Parents: According to the ESRB, this game contains alcohol reference, mild blood, mild suggestive themes and violence. It's pretty sanitized for the kids, with bloodless combat and chirpy, likeable characters all round. Just don't let them into the character biographies—the truth is way more terrifying than the cartoony violence of the main game.

Deaf & Hard of Hearing: It's all subtitled, and there are ample visual indicators for when things are kicking off in important spots.