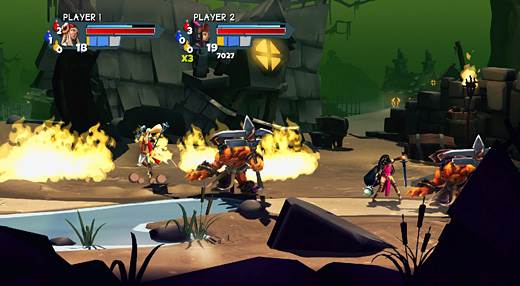 HIGH Fighting through a snowstorm is quite pretty.

WTF The achievements require at least seven or more playthroughs.

The Sacred series may not be the most well-known franchise in gaming, but it's always been an entertaining alternative to the likes of Diablo and Torchlight. Sacred Citadel

takes its core universe and plonks it into a side scrolling bludgeon-'em-up littered with various nods to the likes of Sega's classic Golden Axe in that there's rideable mounts, fleeing villagers, and that sort of thing.

The story's little more than background fluff—it turns out that the Seraphim order, mightiest warriors in all the land, have swapped out their swords and spears for a lifetime of prayer and solitude. This colossally stupid move on their behalf bears bitter fruit when an army of rampaging Grimmocs turn up at their door one morning and decide to smash their Citadel into mush.

Fortunately for all involved, there's a group of heroically heroic heroes chilling in a nearby tavern, so when the Grimmoc horde rolls into town and starts rummaging around for artifacts needed to smash the Citadel's defenses, they spring into action and start slaughtering thousands of the filthy little buggers for fun and profit.

Selecting from one of four exceptionally similar miscreants—the Warrior, Ranger, Mage and Shaman—players will then venture out into a side scrolling wonderland where repeatedly sliding their blades through enemy flesh (or setting them aflame with magic) is the only way to progress. Sadly, despite the game unlocking a bunch of new attacks as characters progress, there's little variation in the combat from start to finish. Grouping enemies together and using the same short combos over and over again is the easiest way to win, and while the option of experimenting with different attacks is available, the options fail to offer any real variety. 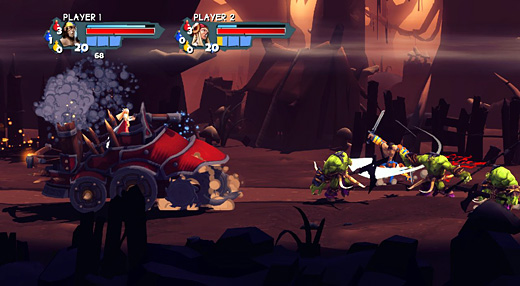 There are smatterings of RPG elements sprinkled throughout, but they don't help things much. Characters level up as they clobber slobbering goons, and weapons and armor occasionally burst out from the corpses of enemies. These tend to be fairly unexciting incremental stat upgrades for the most part, and pieces have no visual effect on characters. A power bar builds as bad guys get their skulls cracked open, and when each segment fills players can tap a button to unleash pain on their foes—the Mage's level one attack inflicts status ailments, whereas the level three variant transforms bad guys into exploding chickens. Sucks to be them.

Between levels, the adventurers can visit a local town to trade goods or swap out equipment. It's all pretty standard fare—health potions can be bought, armor and weapons equipped and there's an NPC dedicated to gambling challenges. Irritatingly, only one challenge from the three available for each stage can be accepted at a time.

The multiplayer is a bit of a squandered opportunity. For starters, the same character class can't be chosen by two different players, so when I finally joined a three player game after fifteen minutes of intermittent searching on Xbox Live, I was forced to be a level one warrior instead of my level thirty six mage. Since the host then chose to fight—and die—at the game's final boss over and over, my online experience boiled down to little more than being repeatedly one-shotted while watching on in abject boredom as the inferior connection caused the host to repeatedly teleport around the screen before getting a sword shoved up his backside. It was riveting stuff.

It's a shame, because Sacred Citadel isn't all bad.

It looks nice, has some decent music, and a few of the events encountered during the eight hour (or so) story mode are quite fun—hopping into a siege tank and mincing enemies underneath being one particular highlight. The other mounts are a wasted opportunity though. With no way to dodge or block whilst riding one, the titanic beasts are often swarmed by enemies before they can even attack.

It's tough to recommend Sacred Citadel

when there are so many superior side scrolling fighters already on the market. While it does little wrong apart from the admittedly important misstep of being pretty damned boring after an extended period of hitting XXXY combos from start to finish, even at its best it rarely does anything better than the competition. That's where the real problem lies—it may be competent in many ways, but it's also vastly outclassed by the classics of the genre. Rating: 4.5 out of 10.


Disclosures: This game was obtained via publisher and reviewed on the Xbox 360. Approximately nine hours of play were devoted to the single-player mode, and the game was completed. One hour of play was spent in multiplayer modes.

Parents: According to the ESRB, this game contains violence and blood. Aside from the siege tank spurting gore out of its exhaust when running over the puny forms of Grimmocs, there's little to be concerned about for the kiddywinks.

Deaf & Hard of Hearing: Nothing to fear here. Subtitles are readily available, and most of the action is of a visual nature.