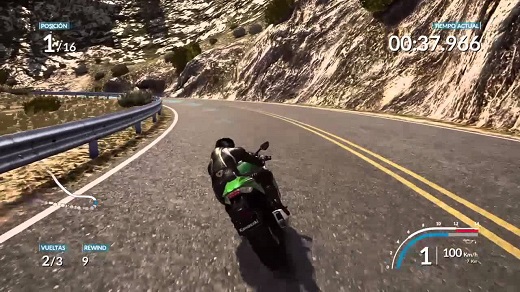 HIGH Nailing a succession of corners at high speed without sliding off the bike like a total klutz.

LOW Encountering several nasty glitches within the first hour of turning it on.

WTF A game centered around going extremely fast has such glacial loading times?

There isn't a great deal of choice for motorbike lovers who want to enjoy the subject on a console. It's kind of strange, really—when it comes to the feeling of sheer speed, there's little to compare with jumping on a Kawasaki Ninja and blasting off the starting line. It's also bloody dangerous, so the relative safety of video games should theoretically be a great way to convey this feeling to anyone not willing to wrap themselves around a lamppost after pushing it too far.

That's where RIDE steps in, coming from the creators of the MotoGP series. The initial setup is quite promising, with players ushered into creating their own avatar for the world tour, and a number of bikes and racing leathers available for purchase.

It isn't particularly involved or deep, but it does make for a reasonable first impression—though the almost pornographic undercurrents in vocal delivery once the narrator starts describing each type of bike or event are a bit of an eye opener. Oddly, a detailed narrative of jawbones shattering against a curb or having fifty pounds of flesh shredded off whilst sliding across tarmac never comes up, but hey.

There are a number of race types in RIDE—standard races make up the bulk of events, but there are also offshoots where players may have to catch up to a rival or overtake a number of other racers before the timer expires. Wins earn credits and reputation, which allows for the purchase of more powerful bikes, customization gear, and entry into new events that were previously unavailable.

Sadly though, it all feels the same regardless of the motorcycle class or racetrack chosen. The racing is clinical, and often lacks a sense of speed. There's almost no sensation of accomplishment or excitement when overtaking rival racers. Even smashing into a wall at 160 MPH is an eerily detached event, with the rider lurching off their metallic steed like a barely-animated human missile before respawning.

I can't see many being happy with the excessive loading times, either. It's hard to tell why it takes so long to get into a race, but at one point I got so fed up with waiting that I pulled out a stopwatch and timed how long it took from bike selection to taking off from the starting line. That particular example took one minute and six seconds. Ouch.

RIDE is buggy, too. At one point I was drifting around a corner in first place when the game froze for a second. Suddenly, I was in sixth place and going the wrong way! It wasn't a simple frame skip where the action continued during a judder where I was unable to see the action—it completely relocated me between one moment and the next and cost me the race. This is just one example.

That aside, RIDE's real problem is that it feels so hands-off and unexciting. It's fine to go for a simulation-style experience, and given the lack of decent motorcycling games available, this should be a good thing. But, there's just no juice to any of it. Swooping in and out of tight corners at full speed failed to get my pulse racing, and yawning my way from one end of a race to another is never a positive sign.

Graphically, it barely gets by. It looks like an early PS3 game for the most part, though the bike models have obviously had the most care lavished on them. Again, though, there's no real sense of speed during play and the environments aren't so interesting that puttering past them has much to offer anyone. Stiff rider animations don't help sell the illusion, either.

Finally, there's a multiplayer mode available for those who want to race against other players, but rival racers were hard to find when I was playing post-release for review, and whether racing against the AI or other players, RIDE feels like it's ambling through the motions, with players ticking boxes off a checklist in the world tour rather than offering any real sense of achievement or progression.

It seems like the developers of RIDE have a passion for motorcycle culture, as evidenced by the narrator's enthusiastic burblings and plenty of descriptive loading screen text, but they lack either the necessary budget or the level of technical know-how to bring that passion into the final product. The mediocre graphics could easily be forgiven if the rest was up to snuff, but the absurd loading times, glitches and lack of polish and speed kill it at the starting line. Rating: 4.0 out of 10

Disclosures: This game was obtained via publisher and reviewed on the PS4. Approximately 7 hours of play was devoted to single-player modes (World Tour was not completed) and 1 hour of play in multiplayer modes.

Parents: According to the ESRB, this game contains mild language. That's it. No worries here.

Deaf & Hard of Hearing: Can't imagine there being any problems here. All pertinent information has text accompanying it, and the racing is more about visual interpretation of what's going on.

You’re 5th paragraph says it all. I don’t understand why someone can’t just put the time and effort into a good motorbike game like they have done with Gran Turismo or Forza Motorsport. What I miss is the weight of motorbike riding, the feeling that if you lean too far the bike is going down, or that you can throttle out of it just in the nick of time; the slowness of the heavy but powerful bikes compared with the quick speeds of the lighter ones (around corners); the thrill of first person perspective as you go around the corners… Read more »