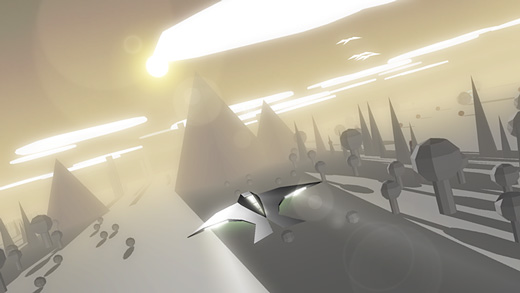 LOW Seeing many of the same obstacles reappear two days on the trot.

WTF Why would anyone partake in this venture? Nobody survives it!

Race the Sun provides exactly the experience that the name would suggest. Players are tasked with speeding along a planet's surface in an attempt to keep up with the star before it dips down past the horizon, cutting off the juice a solar-powered ship needs to keep going.

It's one of the most insane pastimes ever devised, with around ninety nine percent of attempts destined to end with both craft and driver fused into an unrecognizable pile of molten wreckage after blasting at full speed into the side of a mountain. The other one percent perish in the wilderness, broken and alone after the sun sets and leaves the craft completely powerless. It does offer some jolly good fun until the fatalities start piling up, though.

Race The Sun is minimalistic, both in its racing and its visuals. There are few colors on display, lending everything a muted, occasionally beautiful feel. The sense of speed is excellent as the craft swoops through each randomly-generated environment, and the uncluttered design makes objects easy to pick out even while traveling at terminal velocity.

Speaking of which, it's important to note that players don't have control over the speed of their craft (it continually scoots along as fast as it possibly can) so quick reactions and skillful piloting are the order of the day. In addition to obstacles, shadows cast by objects are also hazardous in their own way—while they're not immediately fatal, they'll slow the craft down and cause it to lose power before conking out. Once his happens, the game's over.

There isn't much more to the game than this, truth be told. It's a score attack in the purest sense of the term, and the real draw is competing against other players posting their scores online.

While the game world changes itself each day, every player will be competing in the same exact same virtual racecourse. It's also one of those titles where extended play is required to achieve the best scores—not via accrued skill, but through power ups gained via the leveling system.

For example, upon ranking up for the first time players are awarded with a neat little pickup which reverses the journey of the sun, plucking it back into a higher position in the sky and extending the time before it drops out of view completely. Without this power-up, it's impossible to get a decent score. Later unlocks include emergency systems which save players from death after smashing into objects at high speeds, or warp gates which will safely deposit them right at the end section of the level.

The challenges required to unlock these power-ups are worthy of note. Some are simple, like jumping a few times per run, or not scuffing the wings against objects for several regions on the trot. Others are insane, like finishing multiple regions whilst only being allowed to steer to the right, or surviving consecutive waves of Apocalypse Mode.

Oh, did I forget to mention Apocalypse Mode? It's an unlockable difficulty which makes everything about a hundred times crazier than usual. The areas are still randomly generated, but it's safe to assume that meteors will rain down, explosions will be detonating all over the place, and the amount of detritus and random hazards littering the track will reach silly proportions. Staying alive for more than twenty seconds in this nightmare is considered a pretty good run in my book.

When all's said and done, Race the Sun is a solid offering and I'm sure some players will undoubtedly end up hooked on the thrill of the daily leaderboard battles. On the other hand, some (including me) will come away feeling that the final product is a bit too limited to reach the potential it holds. Rating: 6.5 out of 10.


Disclosures: This game was obtained via publisher and reviewed on the PC. Approximately five hours of play were devoted to the single-player mode, the game almost certainly cannot be completed. There are no multiplayer modes other than the scoreboard.

Parents: The ESRB has not rated this game, but there's nothing to worry about other than inadvertently teaching the little ones that death is basically unavoidable.

Deaf & Hard of Hearing: Race the Sun should be entirely playable without requiring the audio to be present. Minor aural cues might give advance warning of dangers, but most of the game's challenge relies on visual information.