Shut Up And Dance! 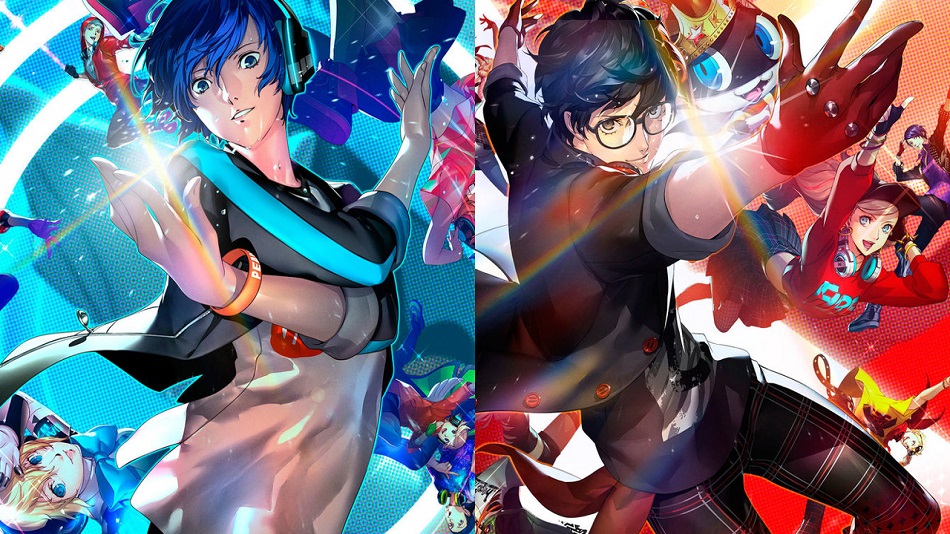 LOW …that has three versions on a 26-track setlist.

Here’s something new — two separate, same-day releases from a popular franchise that play so similarly in execution and scope that I’ll be reviewing both of them as a single entity.

Persona 3: Dancing in Moonlight and Persona 5: Dancing in Starlight bring each respective set of characters into the Velvet Room for a dance party showdown of epic proportions. The reason for this competition? The various Velvet Room assistants from recent Persona titles are convinced that their guests are the bestest guestests that have ever been, and set them dancing before a spectral audience in order to prove their superiority over the others. For my money, Elizabeth’s comically irreverent attitude makes her the best assistant. Fight me.

The gameplay loop is simple. Beats appear in the center of the screen and quickly shoot towards the outer rim, where they pass through a timing bar. Depending on their direction and design, this generally will be one of the face buttons or a direction on the d-pad, and pressing the correct button as it passes through will count as either Perfect, Great, Good, Bad or Miss. 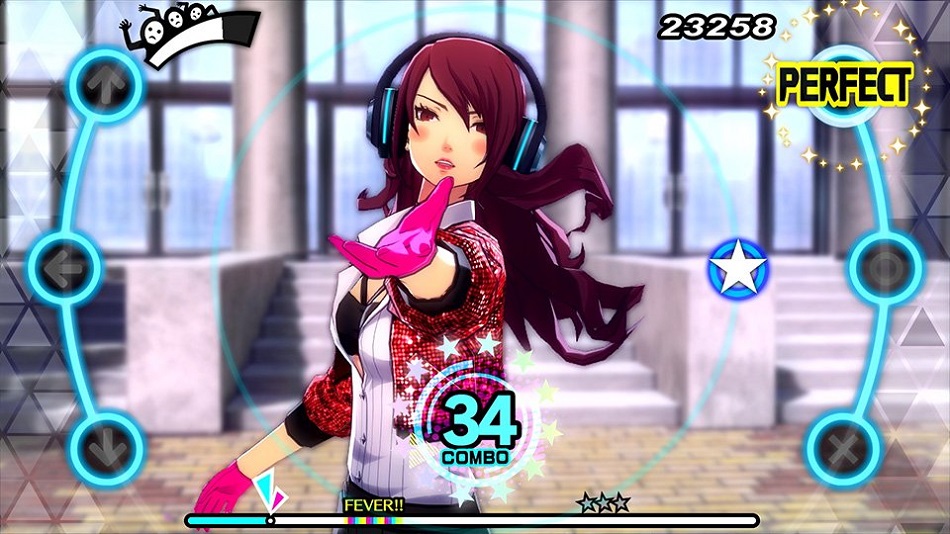 Some of these button prompts may require players to hold them down for their duration and others may need an analog stick flicked to simulate a drum snare, but on the whole it generally requires a bunch of timing button taps to music. Miss too many and the song will fail, hit enough and the stage is cleared — it’s pretty standard for the genre. There are several difficulties to choose for each song, the toughest of which feature a terrifying barrage of notes that will completely overwhelm all but the most dedicated players – which, again, is pretty standard for the genre.

Naturally, games like Starlight and Moonlight rely heavily on whether the soundtrack is strong enough to support and complement the onscreen action, and here that’s… debatable. The Persona series has always enjoyed excellent background music that make sense within a JRPG environment, but few of them are punchy enough to carry a rhythm game, given that they’re often designed to be ambient, laid-back tracks. There are a few exceptions, but when the tracklist resorts to repeating itself with fairly similar remixes, it’s tough not to want a few guest songs from other games or real bands.

As far as the actual dancing goes, the graphics for the characters are pretty decent and the routines they perform are generally okay, even if they are tough to focus on while playing. The cast each have their own little quirks while cutting loose on the dance floor, like Makoto incorporating martial arts into her style, or Ryuji performing heavy metal gestures throughout. Junpei even dances with the aid of swinging a baseball bat around. There are occasional full motion video sequences instead of in-game dance performances, but these feel rather cheap given that they’re just shunting in recycled content from previous games that don’t seem to connect to this game in any way. They range from animated cutscenes to live stage concerts of Persona music, but they just feel out of place and uninteresting.

One annoying aspect is that players can’t select their favorite dancers for each track — they’re hard-coded into each song. Want Mitsuru to perform to Yuu Miyake’s Deep Breath Deep Breath remix? Tough banana. It’s possible to have other characters appear as a backup dancer, but short of any potential late-game unlocks, I was never allowed to have free selection of the main dancer — nobody else can ever take the spotlight for a given song. A shame, really. 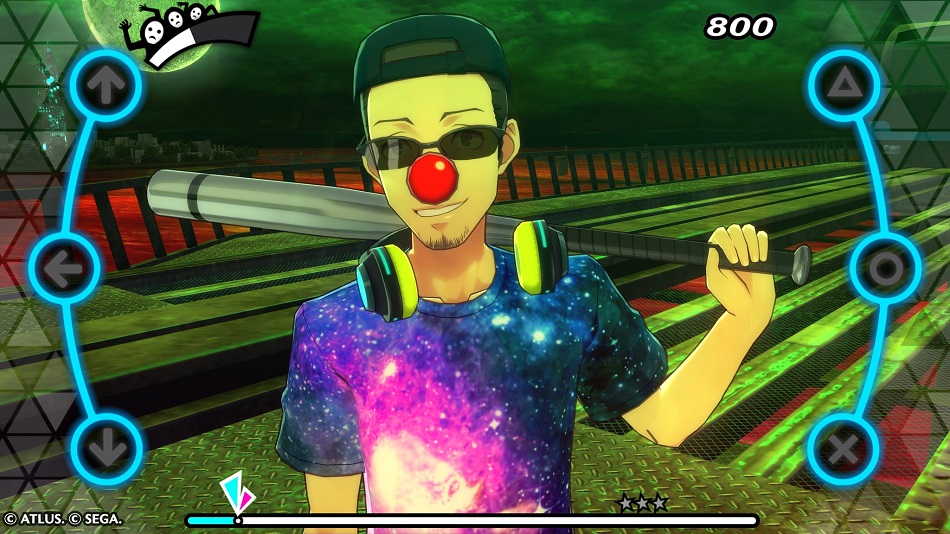 Fans of the Persona franchise can look forward to unlocking numerous character skits where the cast interact with one another in small visual novel-style conversations. The topics on display tend to be a bit random, ranging from the importance of a balanced diet to musings about other members’ oddities, and generally do little to further what story there is. That said, they’re translated well and the characters are quite expressive. Progressing through them also unlocks various costumes and accessories, and furthers each character’s social link – which leads to more character skits. Sadly, there’s no overarching story tying it all together, it’s mostly setup.

Dancing in Moonlight and Starlight may both be competent enough as rhythm games to pass some time with, but they take few risks within the genre, and worse, it seldom feels like the player’s skill is affecting the onscreen action. A great comparison would be the Ouendan games, where it’s always clear how well players are performing thanks to subjects in the background getting hammered due to a bad performance or excelling due to a great one, and constant mini-cutscenes detailing just how the songs are progressing. In Persona, they don’t really screw up their act due to a mediocre performance, so it leads to a feeling that the onscreen action and the player’s efforts are almost completely divorced from one another.

Putting aside the fact that I find it incredibly weird that Dancing in Moonlight and Dancing in Starlight are being sold as two separate, full-priced games (they’re too similar in concept and execution for it to make sense) it’s neat fanservice for those who wish to spend more time with the Tartarus SEES and Phantom Thieves crew. Ultimately, though, I wish that the devs had tried just a little harder to carve out a new and exciting rhythm game, rather than something that fits squarely into established genre norms and coasts by on the charm of its characters. Rating: 6.5 out of 10

Disclosures: This game is developed by P-Studio and published by Sega. It is currently available on Playstation 4 and Playstation Vita. This copy of the game was obtained via publisher and reviewed on the PS4 Pro. Approximately 17 hours of play were devoted to the single-player mode, and the game was completed. There are no multiplayer modes.

Parents: According to the ESRB, this game is rated T and contains Blood, Language and Suggestive Themes. There’s very little that would be unsuitable for most audiences here, even with some double entendres and the usual JRPG high school hijinks where they talk about snooping on underwear and the like.

Deaf & Hard of Hearing Gamers: As both games are focused on audiovisual synergy, it’s tough to recommend either one although there are more than enough onscreen indicators to succeed even without the aid of sound. 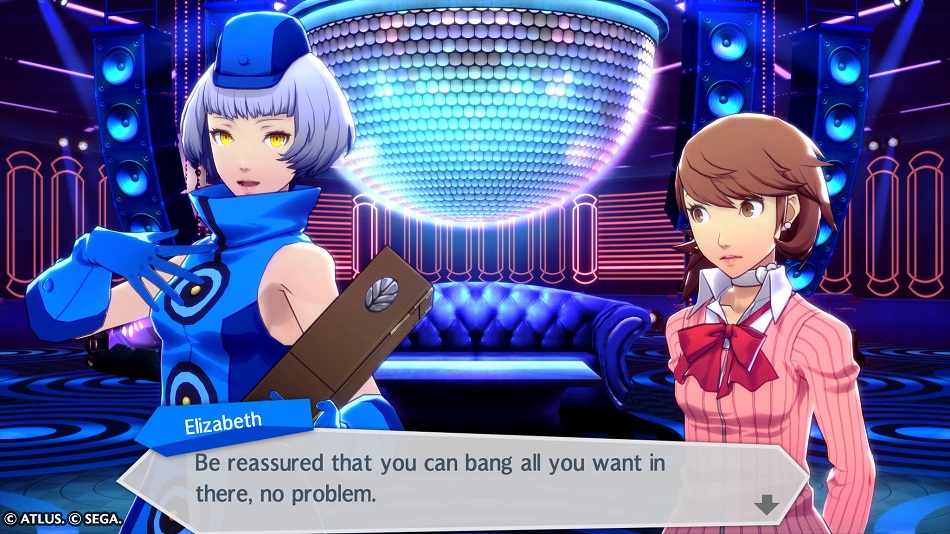 Remappable Controls: No, this game’s controls are not remappable and there are no control diagragms, though ‘scratch’ notes can be assigned to the shoulder buttons. Notes pressed involve triangle, circle and the X button on one side, and up down and left on the other. Scratch notes traditionally involve flicking the analog stick, and certain notes have to be held for a certain duration to succeed.