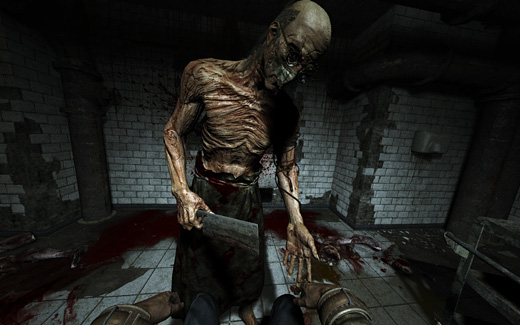 HIGH FACE AT THE WINDOW! GYAAARGH!

LOW Sometimes it's unclear where to go.

WTF There's a distinct lack of clothes going around.

First off, a slight disclaimer—horror games don't actually scare me. This is likely due to the fact that I can't picture myself in the protagonist's shoes when things go straight to hell. After all, when some asylum inmate with his face slathered in the brains of his previous victim decides to amuse himself by hacking my character's head off with a meat cleaver and then shoves it clean up his backside, I'm pretty sure that I'm still going to be nice and safe on the other side of the screen.

It's a disconnect that I've never been able to shake, leading to a lot of disappointing experiences with horror games. There have been a few that got to me, though. Amnesia: The Dark Descent is one I could still appreciate. Outlast, I'm happy to report, is another.

The story's simple. A whistleblower tips off our heroic protagonist, Miles Upshur, to some shady goings-on at a Colorado Mental Asylum. He heads off all by his lonesome to sneak in and bring any underhanded wrongdoing to light. Sprinting through the place with a bunch of murderous inmates trying to hack him up wasn't really part of the plan, but that happens in pretty short order too. C'est la vie.

Miles enters the asylum armed with nothing but a Camcorder to record his findings, but it soon becomes apparent that it offers a far more practical feature—the infrared mode allows Miles to see in the dark. Given that there's an almost total lack of lighting in the asylum and all those marauding murderous types skulking around in the shadows, this is a pretty handy thing to rely on. Sadly, it gobbles up batteries like nobody's business, so pilfering batteries left right and centre is the order of the day when in the facility's dank corridors. 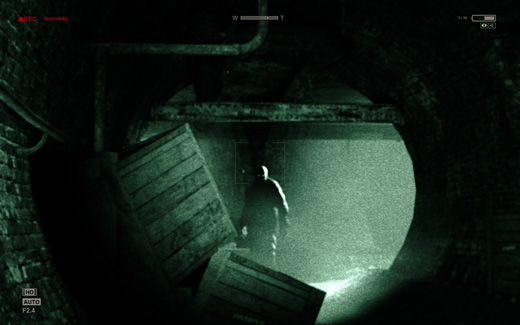 Of course, a bunch of the asylum's inhabitants would like nothing more than to shuck Miles clean out of his skin and use his bloodied tatters as a duvet, so a certain amount of panicked avoidance is in order. Miles may not be able to fight, but he's a dab hand at scuttling under beds or pirouetting into lockers to avoid a grisly end at the hands of his deranged adversaries. He's not quite so good at hiding his emotions though, as every time he winds up peering out through a ventilation grille he'll be audibly gasping, sobbing and quite probably fouling himself out of fear.

Can't really blame him though; these enemies are ugly, freaky bastards. Most of the less aggressive ones have clearly undergone surgery many, many times to have their scrotums stapled to their face (or whatever) in the interests of science. It all adds to the oppressive atmosphere of pain and suffering effectively, and that's without mentioning all the severed heads dotted around the place, or organs slithering out of dead men's stomachs. Lovely stuff.

Where Outlast goes wrong is that sometimes it's not obvious where to go despite being quite linear. Exploration is fine for the most part, but when trying to avoid getting stabbed in the face by wandering grotesques, there's often not much room for figuring out how to progress—and when being chased, it can become an absolute comedy routine of bolting down corridors, hopping into cupboards, being hauled back out and then running around in circles until the particular vent or doorway needed to progress pops into view.

Compounding this is the fact that the bad guys trying to hunt Miles down aren't anywhere near as lethal as they appear. If they find him cowering in a box, they'll often just drag him out and hurl him down a hallway, which leads to nothing more than running away and hiding once again. Surviving several melee attacks before meeting an early demise is common, so sprinting past foes in a bid to locate an exit becomes a viable tactic. Even if death is the result of such a foolhardly approach, a convenient checkpoint restart is never all that far away. It's a disappointing failure in design, though not game breaking.

Still, it's easy enough to recommend Outlast despite the weaknesses. As far as atmosphere goes, it's at the top of its class and the journey throughout is a well-constructed one, for the most part. It occasionally dips too heavily into common video game contrivances—three fuses littered around the area, three switches for a door, scrounging for batteries, that sort of thing—but it's still a gruesomely enjoyable tale despite its flaws. Rating: 7.0 out of 10.


Disclosures: This game was obtained via paid download and reviewed on the PC. Approximately five hours of play was devoted to single-player modes and the game was completed. There are no multiplayer modes.

Parents: According to the ESRB, this game contains… well, not much as it hasn't been officially rated yet. The disclaimer at the start says it best though—"Outlast contains intense violence, gore, graphic sexual content, and strong language. Please enjoy."

Deaf & Hard of Hearing: Unfortunately, there's little point in playing Outlast for those with hearing impairments. Audio is crucial to both atmosphere and gameplay mechanics, and while there are subtitles available for spoken dialogue too much of the gameplay relies on being able to discern ambient noise.