Yep, it's staring back. 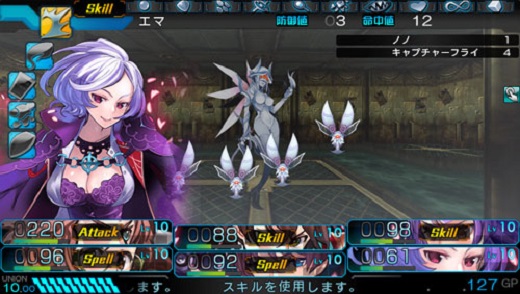 HIGH Killing an endgame boss with a single hitpoint left.

LOW Wandering around for ages without any clue how to proceed.

WTF Do they seriously think the UI is anywhere near user friendly?

Operation Abyss is a first person grid-based dungeon crawler that's unabashedly old school in design, but not always in a good way. Some of its "retro" qualities include things like wandering around levels with no clue where to go, or how some of the equipment stats are so cryptic, I still have no idea what they mean after finishing the game. Amazingly, despite fairly glaring issues like the ones I just mentioned, I still had a pretty good time with it.

The story's a bit throwaway, in that the player controls a bunch of user (or randomly) generated superpowered teenagers recruited by a secret organization to fight demonic Variants that have started appearing over Tokyo to butcher the populace. Cut-scenes play out in visual novel style (minimal animation with lots of text to read) and it's both perfectly adequate and largely forgettable as a backdrop for the game proper.

In Operation Abyss, the real meat of play lies in exploring the game's dungeons. The party is dispatched into sectioned-off districts of Tokyo to undertake various tasks ranging from hunting down Variants to simply scouting out an area. Combat encounters employ a turn-based battle system where attacking, spellcasting and knowing when to run like hell all play a part in getting out of trap-filled dungeons alive.

There are a good variety of party member types available, though choices are somewhat restricted. Without a Wizard or Academic at hand, the player's group can't navigate chasms or disarm traps, and the healer and tank classes are indispensable. I also found that a Samurai provides excellent crowd control, so after feeling like those slots needed to be locked down, that left just one vacancy out of a six-character team. This unspoken lack of party freedom is hardly the game's biggest problem, though.

For starters, the user interface is a bit of a mess that neglects to impart important information at every turn unless players are willing to jump into the system glossary and memorize acronyms and shorthand. Even after 70 hours I found myself occasionally making equipment that none of my characters could use because of gender or karma restrictions, or misreading class initials. Does C signify that it's for a Cleric? Nope, it's for a Conjurer.

Worse (and as mentioned above) it's not always clear how to progress. One section involves such delights as having to unlock a door by synthesizing a special key out of several lesser keys, which is something the devs never hint at up to that point. It's an absurdly throwaway mechanic for something that can block all story progress unless sussed.

However, the most offensive example comes in the postgame where there's a story-impeding door that won't open unless a bunch of seemingly-useless items are purchased from the shop, combined into another item via a lab, and used after the party waddles off to a random set of co-ordinates within a dungeon to collapse through the floor. Then, a boss located there has to be wiped out before going back and finally unlocking the do… oh. Nevermind, this is only half of what needs to be done.

Honestly, puzzles like the one I just outlined can't even be considered actual puzzles given that there are no hints to figure out and nothing to point players in the right direction—there's just a (wait for it…) old-school expectation that players should be blessed with enough dumb luck to blindly wander across the 'solution'. Mitigating this frustration (somewhat) is an online feature where messages can be dropped in the dungeon to help, hinder or outright confuse other players. It's a neat thing that acts as a third option besides going online for a walkthrough or simply giving up.

Despite all my misgivings, Operation Abyss still comes fairly recommended to anyone looking for a dungeon crawler that doesn't mind occasionally hurling its audience to the wolves. Apart from some severely questionable design flaws, the core game that lurks within is a strangely enjoyable and rewarding experience, and a lengthy one at that. It's just not one that's for the faint of heart or short on patience. Rating: 6.5 out of 10


Disclosures: This game was obtained via publisher and reviewed on the Playstation Vita. Approximately 70 hours of play was devoted to single-player modes (completed 1 times) and there are no multiplayer modes.

Parents: According to the ESRB, this game contains: blood and gore, language, suggestive themes and violence. That said, a Mature rating is way higher than it deserves as most of said elements are kinda PG-13 at worst. A few scattered bloodstains and the like, aside from a late game boss that's admittedly kinda grotesque.

Deaf & Hard of Hearing: There shouldn't be any issues. The game is largely text-based when it comes to dialogue or alerts, and battles do not require audio clues.