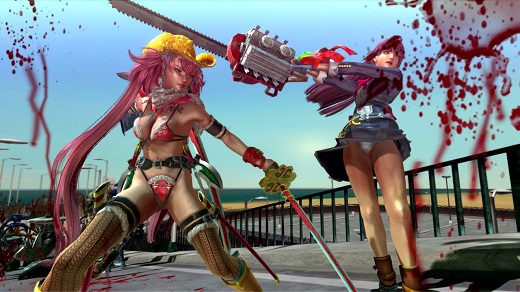 WTF The absurd jump in quality over earlier games in the series.

Onechanbara Z2: Chaos is a game that wears its heart on its sleeve—or it would, if it were wearing enough clothing to actually have a sleeve attached. It's the latest in a long-running line of budget action games involving half-dressed characters saving humanity from a zombie apocalypse by stabbing the undead with swords or whatever their preferred implement of destruction happens to be.

To be frank, the previous games were crappy. Slow, boring and reliant almost entirely on fanservice, even I could barely stomach Bikini Samurai Squad on the Xbox 360 for more than half an hour before lapsing into a coma. That previous lack of craftsmanship is why it's such a delightful surprise to learn that Onechanbara Z2: Chaos is a blast to play.

The combat is enjoyable stuff with a low skill barrier to entry. While the enemies tend to be brainless cannon fodder, chopping them into putrid piles of mulch offers great times. There's also a real sense of style to the rampant bloodshed, and the camera does a superb job of swooping in close to the action, gratuitously slowing time during powerful attacks, and then zooming back out to resume the carnage. It's a great effect which somehow never overstays its welcome despite the frequency with which it occurs.

All playable characters have their own selection of weapons, with Kagura adopting twin swords or a swinging pair of knives strangely reminiscent of Kratos from God of War. Her sister Saaya, in direct contrast to her reserved personality, is even less refined—she simply gets stuck in with a chainsaw, or batters enemies with her fists. There are two others to choose from, and characters can usually be switched between instantly at the touch of a button. If one needs a break, a fresh one can hop in to take her place.

There are other elements besides weapon choice to consider in combat—it's not long before each playable character can enter a rage mode known as Ecstasy and really go to town on enemies, automatically charging up super attacks to demolish dozens of them at once. There's also a team-up attack that leads to absurd levels of butchery as all the girls go on a radical rampage of retribution at once.

I'm having a little trouble figuring out the bosses, mind. While some are decent enough, many are damage sponges with little tactical consideration needed outside of the occasional dodge and getting as much damage in as humanly possible. That said, cleaving a giant behemoth in half during an end-of-battle QTE before seeing the torso and legs still trying to murder our heroic foursome was pretty amusing.

So, the game is a barrel of fun that's relentlessly unashamed of itself, which is great. Surely there's a catch? Well, yes. Of course there is.

Despite being a huge step up in quality over its predecessors, Onechanbara Z2: Chaos shares one thing in common with them: it was likely developed with a budget that'd barely cover building a small garden shed. Most cut-scenes are delivered in a low-cost comic book style, the environments are small and excessively linear, and the gameplay doesn't change much throughout the campaign despite offering numerous skills and weapons to be purchased. While the graphics are serviceable at best, I will say that things do run smoothly throughout, even with a lot of action unleashed at once.

The downsides didn't bother me much, though. The core gameplay loop is highly accomplished, and even somewhat akin to a turbocharged Dynasty Warriors. Launching enemies into the air and pursuing them into absurdly huge combos never gets old, and the aforementioned camerawork makes players look like they're kicking copious amounts of undead ass, even when repeating the most basic combos.

It's always a great feeling to go into a game with no expectations and then come away highly impressed, and that's exactly what happened with Onechanbara Z2: Chaos. It's an irreverent, enjoyably kinetic game, and the takeway is that quartets of highly skilled warrior women murdering the absolute hell out of zombies in bloodthirsty fashion is, above all else, completely and totally rad. Rating: 8 out of 10


Disclosures: This game was obtained via publisher and reviewed on the PS4. Approximately 20 hours of play was devoted to single-player modes (completed 2 times) and there are no multiplayer modes.

Parents: According to the ESRB, this game contains: blood and gore, intense violence, partial nudity, strong language and suggestive themes. It's great.

Deaf & Hard of Hearing: It should be quite an easy game to play through with no aural indication of enemy locations and the like—there's a ton of zombie around, and it's rare that audio clues would ever be needed. The game is also subtitled throughout.

It’s one of those games that I’d recommend a rental for if you’re on the fence. I prefer it to Lollipop’s Chainsaw’s gameplay by quite a bit, though it doesn’t have the humour or awesome music of Lollipop behind it.

I think I’ll just stick with Lollipop Chainsaw. The previous Onechanbara games didn’t really impress me that much, and even with the gameplay improvements it still doesn’t really sound like my thing.