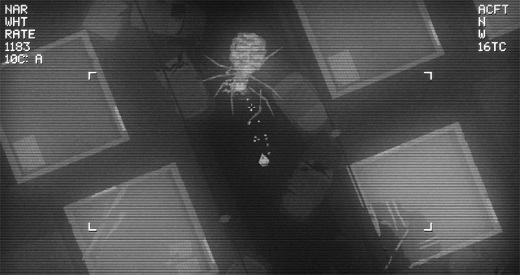 The horror! Mankind has been devastated after a vast apocalyptic purge from some ancient evil and left to fend for itself against a rampaging swarm of massive, mutated enemies known as the Nocturnal. Oh no! If only there was a creepily dispassionate orbital satellite giving them directions to further its own mysterious cause.
There is? Phew!
Gameplay in Noct takes place from the viewpoint of the aforementioned thermal satellite floating around up there in orbit where it's nice and safe. The player character, on the other hand, is unfortunately located down on Earth, constantly trying not to get devoured by giant  mutant bug things which can rip them apart in one bite. Instructions get issued from the camera, waypoints spring up elsewhere on the map, and it's up to the unlucky survivor with boots on the ground to go and do its bidding.
Noct is billed as a Survival Horror title, but at present it would probably be more accurate to refer to it as a simple twin stick shooter. There's not a great deal of survival related gameplay in there other than blasting enemies and finding ammunition before the mutated hellbuggers tear them to bits and start feasting  upon their corpse. Food and water pick ups are present, but seem to do little aside from limiting the player's ability to sprint when thirsty, and there's no worries about finding or building shelters. It's pretty simplistic. Even the medkits seem to be utterly useless at present given that players die immediately upon contact with the enemy.
One strange thing about Noct is that when a character heads indoors, the outside world melts away – which is exactly the opposite of what the satellite would be able to see. It does cause some tension when getting ready to head back out as there's no way to see if a gigantic spider is lying in wait with its mandibles glistening, but if there is… well, that's probably going to lead to instant death.
See, there's been a few situations even in my short playthrough where it's essentially been impossible to react in time to certain aggressors. Just a few too many moments involving a survivor rummaging around inside a building, the screen flickering briefly, then some monster comes rampaging in from the nearest entrance and instakills them in approximately three nanoseconds or less. That's neither effective horror nor a fun gameplay mechanic, it's just kind of irritating.
At least there's little penalty for death – another survivor is always nearby, and simply has to go and retrieve the ammo and items the last poor mutilated bugger left behind whilst shuffling off this mortal coil. It's also possible (and encouraged) to head online and try to survive the apocalypse with other players… or kill and rob them for their possessions. Given how hostile the environment is though, it's probably best to work together here.
Noct looks cool, with a pleasingly bleak aesthetic and atmospheric ambient music setting the tone, but there's little to recommend buying it at the moment while it's still in early access. There's simply not enough in it other than wandering from one waypoint to the next before the story progression comes crashing to a halt approximately thirty minutes later – one minute I was being urged to stock up in an abandoned military base, the next I found that I myself had been abandoned by the storyline itself and left to my own devices.
That's pretty much it at present. It's a cool idea, but like most early access games, probably still needs more meat on its bones before it can be considered worthy of an actual purchase. However, a quick look at the store page on Steam claims that it's almost feature complete with only a few more updates needed to bring it to completion. I can only hope that these updates are substantial ones given what's on offer currently.