The 'z' makes it sound rad 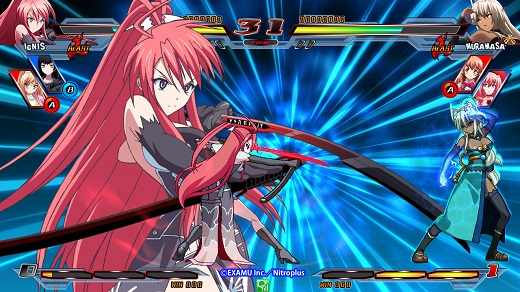 HIGH Sledgehammers, zombies, lasers and super moves, all in one combo.

LOW The story modes are nonsensical—and from a game featuring visual novel characters?

WTF 'In this world full of quasi-hexagonal pedestals…'

I tend to like Examu's work. They're the developer behind the Arcana Heart series and the surprisingly decent Aquapazza: Aquaplus Dream Match. Their output is generally enjoyable, simple to play, and tends to have a lot of crazy visual stuff going on. Nitroplus Blasterz: Heroines Infinite Duel continues these traditions.

For an anime crossover title, it was unusual that I only recognized four characters from the available roster of fourteen—two of which were DLC characters. Homura from Senran Kagura and Heart from Arcana Heart both have to be downloaded to become playable. (On the plus side, they're free for the first month following release. Get 'em while they're hot!)

The rest of the faces are a mishmash of characters from various Nitroplus properties I doubt most people will have heard of—hell, I hadn't even heard of the company itself until I played this. My favorite ended up being Mora, a diminutive vampire hunter who smashes her enemies to a pulp with a gigantic hammer. She's simplistic but powerful, but if her approach doesn't appeal there's a decently varied selection of anime girls and fighting styles to go around. No dudes though. Dudes suck!

Getting my complaints out of the way, I don't think it's a particularly great-looking game. The backgrounds are bland, simplistically-rendered 3D affairs with little to recommend them, and although the player sprites are both clean and decently sized, the animation's a little undercooked—it saps them of their vibrancy and personality during fights. The menus are also about as dull as can be.

On the upswing, the fighting system's good, landing somewhere between Vampire Savior and the Guilty Gear series in terms of movement, complexity and attack styles. Players can air dash, emergency roll, run back and forth at speed and pull off a number of special attacks which use up a chunk of a super gauge. The engine also allows for just hammering buttons, too—it's easy to chain normal attacks together for simple combos that fighting game newcomers can dish out easily. It may be a trifle simplistic for my taste, but it won't send beginners running screaming for the hills the way some hardcore fighters might.

There's also a partner system, giving each combatants two assist characters to help them overcome their opponents. At the touch of a button they can be summoned in to: fire off massive laser beams, summon zombies, blow up half the screen, fly back and forth on a hang glider, fall off a scooter-type thing, stand around while looking menacing, rock the hell out with their band in the background, or summon deadly insects… all sorts of crazy stuff. They can be effective when unleashed too, given that some of those laser beams can do as much damage as a standard super attack when they land.

The main meat of single player is the story mode—or modes, as it turns out. The initial offering is a simple arcade-style run with occasional dialogue between some matches, but upon finishing, 'Another Story Mode' opens up. This run offers a slightly more involved visual novel approach to the proceedings, and instead of selecting a single character, players rotate through a fair chunk of the overall cast. Sadly, the story is woefully done, content with trying to overwhelm readers with pointless terminology rather than attempting to tell a decent tale or give anyone involved a whisper of character development.

The other modes are as expected for the genre. There's a score attack mode, some gallery related tidbits for viewing unlocked movies and illustrations, and network modes for getting online to play some ranked or friendly matches.

The online seems competent as far as the netcode goes. I'm located a little further afield than most players in North America will be, and I still got a couple of decent matches mixed in alongside a few lousy ones. Investigating further, it seems that this is a typical experience even amongst Americans playing versus other Americans, so the online experience may be somewhat variable.

Despite its crazy name, Nitroplus Blasterz: Heroines Infinite Duel is actually a solid little brawler, though it definitely lacks the depth, fine tuning and good looks that would give it a shot at being competitive with more established series in the genre. As a breezy little knockaround, it does its job perfectly well, though to be honest, I don't see myself putting more time into it down the line. Rating: 6.5 out of 10


Disclosures: This game was obtained via publisher and reviewed on the PS4. Approximately 10 hours of play was devoted to single-player modes (completed 4 times across various modes) and 2 hours of play in multiplayer modes.

Parents: According to the ESRB, this game contains animated blood, language, partial nudity, suggested themes and violence. Most of it's entirely fine for a teen audience, though there was one fairly startling moment in Another Story which raised my eyebrows* involving Anna and a mysterious woman… well, quite clearly taking advantage of her.

*and only my eyebrows, smartass.

Deaf & Hard of Hearing: All dialogue is in Japanese, and the necessary stuff is all subtitled. In-game voice acting isn't subtitled, but anyone without knowledge of the language won't understand what's being said either. No real problems overall.