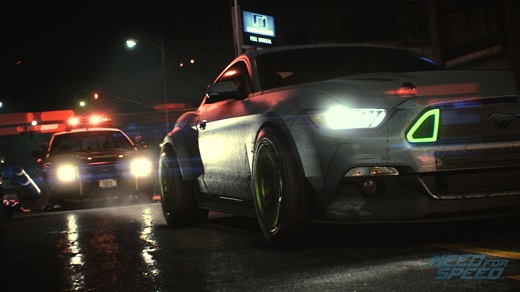 HIGH A great sense of speed and lovely visuals.

WTF They sure do like phoning up this dude who never, ever talks.

Welcome to Ventura Bay, the featured city in the latest Need For Speed where the sun never shines and it rarely stops raining! Everyone here absolutely loves to race – except the cops, but they're total squares who don't get the streets like the kids do. They don't understand the subtleties of sick cornering, nitrous enhanced redlining, or putting the lives of everyone involved at risk while thundering down the wrong side of a highway for a momentary adrenaline buzz. Yeeahhhhhhh bro!

Sorry. I've been watching too many of Need for Speed's FMV cutscenes, and it's gotten under my skin in an unhealthy way.

The game begins by befriending a bunch of sterotypical racers who constantly say things like wicked or sick or boyyyy and are as ridiculous a group of demi-human caricatures as ever existed. That's okay though, because the player apparently controls a mute, car-loving robot whose only ability to communicate with nearby life forms involves some hot fist-bumping action.

…And I absolutely loved it, absurdly blatant Monster energy drink product placement and all.

As luck would have it, the main characters in this FMV extravaganza all have their own unique hook to steer players through various events. Spike is all about speed, so introducing players to sprint races are generally his domain. Robyn enjoys being part of a pack, so she's one for doing stunts with a posse. Only Travis, the dirty Terry Bogard cosplayer extraordinaire, seems to have no role – thus making his actual role as obvious as can be. It all works pretty well.

Visually, the game is awesome, with a superb feeling of speed while belting along in fast rides. Taking place almost exclusively at night with rain perpetually falling… honestly, it's incredible. A little one-note perhaps, given that dawn will only break for brief moments before darkness descends upon the city once more, but it's superb work.

The handling is great too, in an arcadey way. Eschewing the simulation approach of the Shift subseries, it's generally easy to corner, even when screaming along like a bat out of hell. Cars are fully customizable to either end of the drifting spectrum, with multiple rides and components available to tinker with for those who want to really get stuck in. These options make a huge difference – I once tuned the grip so high that my car basically couldn't steer because it was clinging to the tarmac so tightly.

The open world is sparsely populated aside from other online players. The game has a baffling always-online requirement where everyone races alone in their little bubble, but are still clumped in together for whatever reason. That said, as a whole it generally works. Too much traffic would only complicate things, and zooming around at night can be a great feeling. Missions and invites to races generally come in over the phone, and winning these will accrue money and'respect' points which level players up and unlock new car parts for their garage. Nothing earth-shatteringly unique, but reasonably well implemented.

By this point it must seem that Need For Speed is nothing but a good time, but don't race off to the local shop just yet – the game has some major annoyances built in.

While the races are great in the early days when they seem fair – maybe even a little easy — some of the later events stretched my tolerance well beyond the breaking point and soured me on the game more than I'd have thought possible.

The worst offender is the AI. It absolutely blows. I've seen more subtle rubber-banding in a Mario Kart game. For instance, there's a skull-atomizingly frustrating mission called 'Component Parts' where my rivals overtook me on straightaways going at least twice the speed I was capable of, despite being in the fastest car in the game, maxed out and with nitro enabled. It looks like they've stolen bloody jet engines and strapped them to their cars, and it's utterly ridiculous.

The reverse of this rubber-banding is also true. Crash early in the race or putter about like a stereotypical Sunday driver, and they'll often slow down to ensure that catching up is rarely impossible. It's really, really tough to feel any satisfaction beating these idiots, given that they can arbitrarily win or lose as the AI pleases.

The rotten AI doesn't improve in different types of events, either. Drift trains (synchronized drifts between multiple participants) often disintegrate into pure lunacy as the other AI drivers start smashing each other off the road or teleporting into the distance at mach five. 'STAY WITH THE GROUP TO SCORE POINTS' shrieks the onscreen pop-up, which would be less annoying if the so-called 'group' didn't dissolve thirty seconds into the race or spend most of its time ramming into me to steal my drift points before they're banked.

Apart from being dumb, Need For Speed is also buggy. In the last stages of the final race of the game, my GPS tracker disappeared. Finishing the race was impossible without following the others, leading to an unwinnable situation. Other bugs cropped up for me as well, like the game resetting after a head-on crash by sending me straight into another collision before I could regain control, or when one of the racers decided the laws of gravity weren't rad enough and continued on his merry way suspended 20 feet in the air.

While I ended up being surprised at how much I liked Need for Speed when it wasn't trying to strangle the very joy out of life itself, it's a game that's obviously flawed — the cheating AI, the always-online requirement, the glitches — but it's still a damn good looking racer that gives a real buzz when it's working as intended. Whether people will be willing to put up with the bad in order to enjoy the good… Well, that's debatable. Rating: 6 out of 10


Disclosures: This game was obtained via publisher and reviewed on the PS4. Approximately 25 hours of play was devoted to single-player modes and the game was completed. Multiplayer mode is always enabled.

Parents: According to the ESRB, this game contains language and mild violence. Perhaps some will take issue with the general message that outrunning cops and wreaking full speed havoc is a fun and wholesome thing to do, but other than that it's pretty harmless.

Deaf & Hard of Hearing: Subtitles are available and other than minor things like cop sirens going off – easily spotted by their siren lights regardless – there's nothing that should trip up players unable to hear any audio cues.