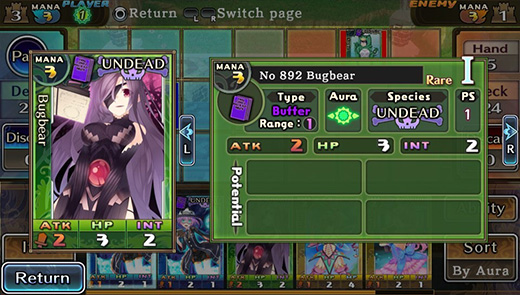 HIGH Clinching a win in a hotly-contested online match when all seemed lost.

LOW The endgame of the single player campaign stretches out foreverrrrrrrrr.

WTF Unimportant NPC's haven't even been afforded the dignity of a pair of eyeballs.

The single-player campaign of Monster Monpiece chronicles the adventures of May, a shy and self-doubting master of monsters who embarks on a journey for reasons that are too mind-numbingly tedious to go into. Despite the fact that her quest involves some pretty important milestones including overcoming her lack of confidence, preventing her friends from turning into bloodthirsty abominations and saving the world from certain doom, the dialogue and characters are bland as all hell throughout.

Good thing the game itself is pretty damn decent then, eh?

Putting the soporific story aside, Monster Monpiece is a card game which takes place on a grid-based battlefield. Once cards are played on this grid, they turn into soldiers which can both defend against and attack the enemy. Both players have a home castle placed at either end of the playfield, and the goal of each encounter is to have troops trundle over to the opponent's side, murder anything stupid enough to get in the way, and promptly smash the opponent's domicile into a fine, dusty paste.

While this is the gist of play, keep in mind that it's a card game at heart. As such, there are a ton of additional variables to keep track of. For example, each card drawn has its own health, attack, and intelligence stats which directly tie into how much abuse they can dish out (or receive) before popping off to that great deck of cards in the sky. They also have one of four colors assigned to them, so placing three cards of the same color consecutively will upgrade every friendly piece on the board and generate additional mana to summon more cards.

The structure of Monpiece goes even further than when taking into account ranged and melee attack types, buffing characters by merging cards of the same race together, and additional special skills for certain cards based on their level. It's reasonably in-depth without being overwhelming, and easy to get the hang of since all the pertinent information is clearly laid out.

Naturally, putting together the perfect deck is a huge advantage in battle. To obtain more cards, (and thus more variety in strategy) they can be won from opponents, found in the story mode or simply bought from a shop—either using in-game currency or from the PSN store with real money. While I didn't try the cash option, the cards I accrued through gameplay were more than sufficient to stomp unwary opponents. Brute force for the win!

Speaking of improving decks, that leads into discussing the somewhat infamous aspect of Monster Monpiece—the monsters in the game are all drawn as cute girls in suggestive poses, and in order to level them up, it's necessary to use the Vita's touchscreen controls to rub their erogenous zones until their clothes literally fall off their bodies. Nothing chaste about it, either. We're talking butts, breasts, and pretty much anywhere on the female body that might be touched.

The problem isn't that disrobing digital women is particularly offensive to my admittedly barbaric sensibilities (and if I ever turn into one of those droning moralistic crusaders, please feel free to put a bullet in my head and ten in my back just to be sure) but rather because the minigame associated with it is tedious to play through. It takes far too long to complete, and powering up a bunch of cards can take forever.

The other issue I have with Monster Monpiece is that a win can literally come down to a coin flip at the start of the match to see who goes first. Assuming both players are using the maximum deck of 40 cards, if a match goes on long enough, whoever draws all their cards first will automatically lose. Since a card has to be drawn each turn, stalling strategies can be used to take advantage of this. Thankfully, it doesn't occur often.

Monster Monpiece has a few flaws in its design and an underwhelming story mode which caused me to slip into five individual comas during the ludicrously long endgame sequence, but it also provides some thoroughly excellent card battles, especially when taken online against others with a similarly-balanced skillset and deck. And even if the powering-up mechanic rubs some people the wrong way—HA HA HA THAT WAS A JOKE—it's still a damn fine game and entirely worthy of consideration for anyone in the market. Rating: 7 out of 10


Disclosures: This game was obtained via publisher and reviewed on the Vita. Approximately 20 hours of play was devoted to single-player modes (completed 1 times) and 4 hours of play in multiplayer modes.

Parents: According to the ESRB, this game contains: violence, sexual themes, and partial nudity. Violence my backside, I've seen bloodier cartoons shown on a Saturday morning. The sexual content is real enough though there's no actual sex, talk of sex or even mild innuendo involved—just rubbing artwork depicting females until their clothes wind up looking a bit skimpier than they were previously.

Deaf & Hard of Hearing:  All dialogue is voiced in Japanese, subtitled in English and no sounds are important to enjoy the game fully. It should be no problem at all to play, even with hearing impairments.

Hey Anon, thanks for taking the time to post! I will say that in single player it’s a decent tactic to set up Level 3 Fia or another archer with stasis and high attack range, fused and with a buffer to block off routes – online a little less so as nobody’s stupid enough to waltz into the lane of death. (And yeah, it’s also a little confusing seeing card powers activate upon placement even though there’s nobody in range to benefit from it, sucking up the mana pool as they do so.) Truth is though, in the main I… Read more »

Thanks for the nice review. I, however, want to point out big flaws with the battle system and card selection: – pretty much all story and online battles consist of deploying your basic melee units, fusing them and putting a healer behind; this is the best strategy in almost all situations – because of the above, 2 out of 4 classes – ranged and buffers – are useless, with almost all ranged classes having range of only 2 and buffers being much weaker than melee. – thus a lot of units end up being unused: because they are either weak… Read more »