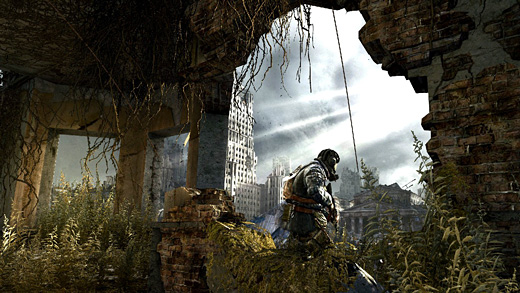 HIGH Stepping out onto the irradiated surface in the midst of a downpour.

LOW The stealth approach is so overpowered it can completely break immersion.

WTF Those dancers jiggle harder than the Dead or Alive girls.

It's been a year since the events of Metro 2033 and humanity's battle with the Dark Ones.

Viewed as the gravest threat ever to face mankind, very few were able to figure out that they weren't the bloodcurdling abominations they were believed to be. In fact, they were possibly the only hope left for mankind's survival.

Unfortunately, the Dark Ones were the most socially awkward conversationalists in the world, what with not speaking a human language and inadvertently causing people to lose their minds and start hallucinating. As a result, 2033's protagonist Artyom responded to their heartfelt messages of hope and peace by directing a missile strike at their home base, killing them all in the process.

begins, it happens that one of the Dark Ones may still be alive. With misunderstandings still afoot, Artyom is tasked with tracking it down and putting a bullet in its head by his bullheaded superiors.

This sequel to 2010's surprise hit is a first-person survival shooter that takes players back to the underground Metro tunnels of 2033, and they're still a horrible place to be. It's not merely the fact that they're rusting away and providing a nest for all sorts of irradiated critters with huge mandibles, they're also inhabited by nasty humans with twisted ideologies. To say more would spoil the experience, but there are some grim scenes throughout Last Light where humans cheerfully do despicable things to one another in the name of both survival and their own perverted pleasures.

That said, the original game's karma system has returned, so it might be possible for Artyom to rise above the barbarism orchestrated by his fellow man. Listening to the hopes and dreams of Metro dwellers helps, as do more obvious actions such as, say, not gunning a defenceless enemy into little meaty chunks after he puts aside his gun and surrenders, or by not cheerfully slitting the throats of everyone he meets. 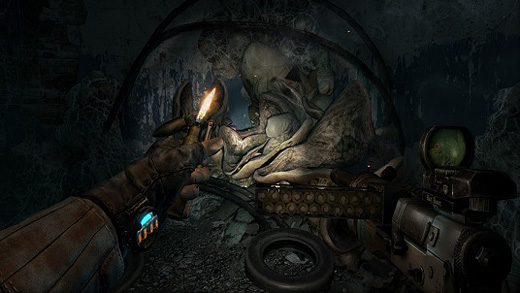 Technically, Last Light's combat is much improved. The first game was notorious for having odd physics where shooting someone in the back of the head was often little more than a mild suggestion that the enemy should probably die, so it's all been tightened up—a little too much, perhaps. Headshots are incredibly easy to pull off, and the player often feels more like a crack commando in a traditional shooter than a hard-bitten survivalist fighting for his life. Legions of foes often pose no real threat, and this lower degree of struggle definitely works against the game.

Also undercutting the desperate atmosphere is the fact that taking the stealthy approach is, if anything, completely overpowered. If there's so much as a hint of darkness in the environment, Artyom develops the powers of a chameleon. Enemies will fail to see him from just a few feet away, spinning an enemy around and punching him in the face won't be heard by those right beside him, and enemies routinely fail to notice lights being broken or snuffed out when they're passing by. At its worst, the oblivious, witless AI negates much of the incredible work done by the environment artists in crafting an otherwise immersive and solid world.

Putting those issues aside, where Metro: Last Light shines is in the detail invested into its post-apocalyptic world. The game isn't afraid to slow down and allow Artyom to scurry around the camps of survivors to see how they're all getting by, and when outside the relative safety of these camps, the world is often pitch black and crumbling away from disuse. It's the occasional trips to the surface which impress the most, however—the weather effects are some of the best I've seen, with rain and mud splattering across Artyom's visor and obscuring his vision while exploring. Oh, and the air on the surface is lethal, so hopefully that gas mask doesn't get broken by the mutated wildlife scuttering around up there. That would be bad.

Sadly, scrounging around for weapons and equipment has been made a little too simple in comparison to Metro 2033—for example, at one point I had forty-five minutes of available oxygen filters for excursions to the surface, kicking all the tension out of the experience.

Speaking of tension, I'd intended to check out the scarcer items and higher difficulty of “Ranger Mode” to see how the experience differed, but it was sadly unavailable at the time of writing—and for some inconceivable reason it's also been cut out of the core game and offered as launch DLC. Given that this harsher mode is often heralded as the "true" way to play Metro 2033, its inexplicable omission is very likely going to displease certain players.

teeters on the precipice of being a genuinely great game, but it's a crying shame that many survival aspects from 2033 have been toned down to such a degree that it's ended up a friendlier, more linear experience. With a little more player agency in how they go about their business and more freedom to explore this incredibly atmospheric world on their own terms, Artyom's time in the Metro could have been truly special. As it is, it's a damn fine game and definitely worth playing in spite of the stumbles that keep it from reaching its full potential. Rating: 7.5 out of 10.


Disclosures: This game was obtained via publisher and reviewed on the PC. Approximately 16 hours of play were devoted to the single-player mode, and the game was completed. There are no multiplayer modes.

Parents: According to the ESRB, this game contains blood, intense violence, nudity, sexual content, strong language, and the use of drugs and alcohol. It's not a game that should be placed alongside Mario Tennis on a shelf for the kids, to put it lightly.

Deaf & Hard of Hearing: More than most first-person shooters, Metro: Last Light requires a keen sense of awareness in the environment, and audio cues often belay information on where enemies are lurking. Furthermore, while there are subtitles available, much of the ambient conversations unconnected to the main story while walking around campsites are sadly unsubtitled. Players with hearing impairments will encounter extra difficulty, so be prepared.