The Good, the Bad and the Average 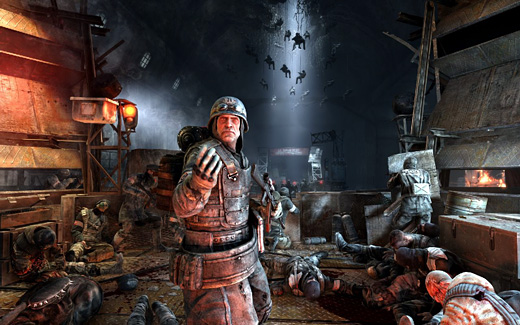 WTF Stare those enemies down? They just beat me to death for trying.

The first piece of downloadable content (DLC) for Metro: Last Light's season pass has arrived, offering a mix of game types which vary wildly in theme, tone and quality. Given that the core game was such an intense and atmospheric experience, it's interesting to see how these quick-hit standalone chapters hold up—not just against the main campaign, but with each other.

The first chapter on offer is Heavy Squad, which tasks players with stepping into the jackboots of Hans, a great big heefing brute of a soldier who sits in a dugout armed with a mini-gun and subsequently annihilates hordes of enemies converging on his position. The scene lacks context beyond Hans's desire to murder everyone in sight, and is so painfully restrictive that it may as well be a turret level.

In many ways it's like an inferior replica of a section that already exists towards the end of the main game. Bullets seem to spatter Hans through solid walls, the boss battle involves an attack that can kill him even if it misses completely and… well, it's not a great deal of fun to play. It's short, often irritating, and ends with a cut-scene of Hans standing atop a mountain of filthy non-Nazi corpses. Which means that the Reich is victorious! The Nazis win! Hooray for the Na… wait, what?

Up next is the far superior chapter named "Kshatriya" in which players take command of a Polis Ranger tasked with tracking down relics from the old world. Armed with a checklist of desirable retrievals ranging from toys to mythical secret subway maps, it's time to head on out to the irradiated surface once more and see what can be found.

What makes this section shine in particular is that despite taking place in a fairly small environment, it finally allows players to stretch their legs and explore without constantly being herded forward by story beats as in the main campaign. Venturing out into the Great Library—an area which will no doubt be familiar to Metro 2033 players—it's possible to repair light sources and unlock shortcuts for easier progression through the chapter.

In addition, there's also a base camp which sells weapons, ammunition, armor sets, and shells out payment for items retrieved whilst scavenging. It even features a save station hiding away in the back—overlooking it cost me a chunk of game time as there are no conventional checkpoints during this mode. Even so, it's a well implemented segment of DLC and the perfect complement to the main game's more linear approach.

Finally, there's one more chapter which involves taking on the responsibilities of a Communist sniper as part of a two-man squad infiltrating a Reich-controlled outpost. This is a stealth heavy section which features sniping and close range combat, with the small caveat that enemies setting off an alarm will instantly fail the mission.

Unfortunately, it's sometimes a little unclear as to which enemies should be snuffed out and in which order, leading to more trial and error moments than is necessary or desired. Generally speaking, this section is largely… okay. A little bland and short lived with an overly abrupt ending, perhaps, but it still does the job of providing more Metro: Last Light to those who crave it.

These three chapters are what this new DLC offers to Metro fans, and I have to say that if it weren't for the Kshatriya chapter, the value of spending money on the other two chapters would be questionable as they're very similar to situations and gameplay mechanics found in the main story. Kshatriya alone makes it all worthwhile however, featuring reasonably generous and unique additional content in a DLC pack which won't break the bank. Rating: 6.5 out of 10.


Disclosures: This game was obtained via publisher and reviewed on the PC. Approximately five hours of play was devoted to single-player modes (completed one time) and there are no multiplayer modes.

Parents: According to the ESRB, this game contains blood, intense violence, nudity, sexual content, strong language, and the use of drugs and alcohol.

Deaf & Hard of Hearing: While there are subtitles available, situational awareness through audio clues will be lost such as the distinctive sound of enemies scurrying around in the darkness.