Beauty Is More Than Skin Deep 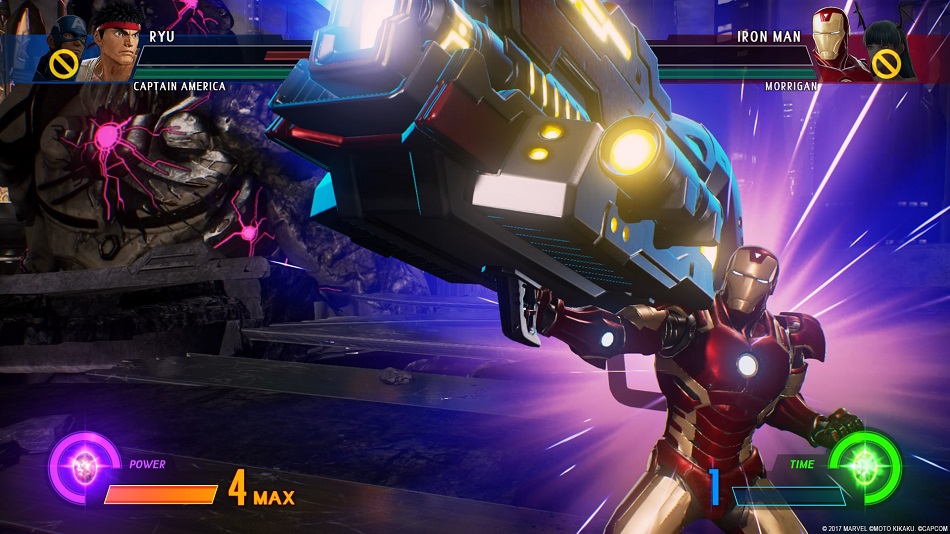 HIGH The gameplay is totally up to scratch…

LOW  …The rest of the package, less so.

My first impressions of Marvel vs Capcom Infinite weren’t good thanks to a remarkably stunted roster missing many favorite series characters, a questionable new look, and a subpar user interface that seemed more suited for a mobile game spinoff. That said, as I dug deeper and deeper in, I discovered that it did have some redeeming qualities after all — primarily among them, the combat’s pretty bloody good.

Let’s start with MvCI‘s ugly aspects, because there’s a ton to go around.

First, the character models are fairy bad. Given that it’s now competing with stuff like Injustice 2 and the upcoming Dragonball Fighter Z, Marvel vs Capcom Infinite looks markedly inferior to the competition. Resident Evil‘s Chris Redfield is probably the worst offender — even though other characters have stranger proportions or uglier faces, Chris has a terrifying thousand-yard stare that makes him appear to be looking straight through anyone he talks to while a seriously confused squint adorns his manly face.

The roster itself is another point of contention. Simply put, it just doesn’t live up to the standard set by its predecessors. While some fan favorites like Dante and Spider-Man are still present (and frankly, it would be impossible to keep every fan completely happy) MvCI feels like it’s retained the dregs from previous iterations while adding only a couple of interesting new faces such as the admittedly-decent Captain Marvel.

I’m assuming this lineup is largely due to some rights and licensing-based skulduggery preventing characters like the X-Men and Deadpool from making a reappearance, but that doesn’t explain why many more interesting Capcom characters have been cast into the void. Viper and Tron Bonne being dropped is bad enough, but when bloody Nemesis is still here stinking up the roster, it makes me wonder whether Ultron might be right in trying to destroy the earth

…Oh,  and just to really put the boot in, the two characters I was most interested in checking out – the Monster Hunter girl and the Winter Soldier – are both post-release DLC characters that need to be paid for. Blergh. 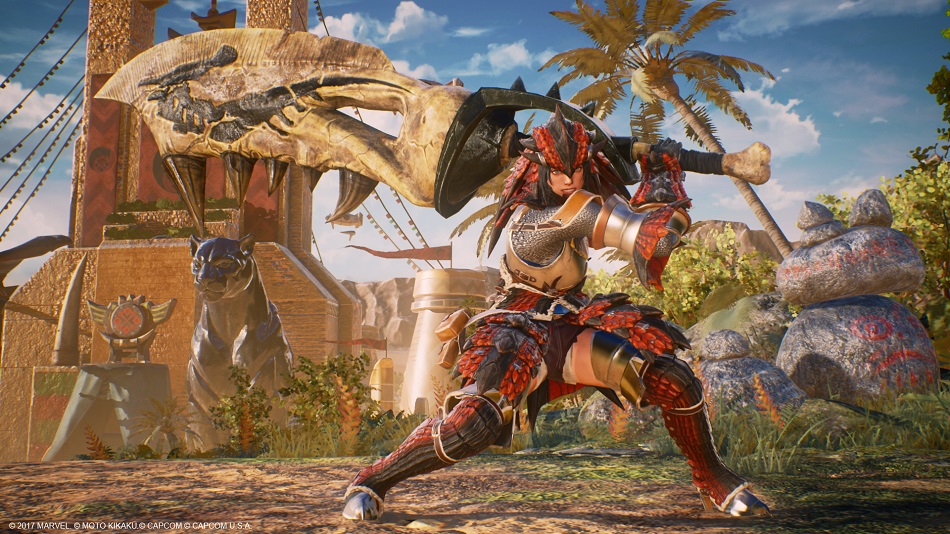 So far, so borderline terrible. However, it’s not all Doctor Doom and gloom, though. Thankfully, the game actually plays rather well.

As a heads-up to series vets, the rules of combat have changed a bit. Three-on-three matches are gone, and bouts have been trimmed back to feature more traditional tag team matchups. Chosen characters can swap in and out as they please (even multiple times during combos or supers) though this does come with the risk of having both characters chowing down on the receiving end of a screen-filling super attack if performed at the wrong time.

As usual, a fraction of the health gauge turns red after taking damage and can be recovered when a character tags out to get sufficient rest. Auto combos also come standard, and while they’re somewhat abused online right now, they’re pretty weak compared to what can be achieved with a little experimentation in training mode. And, as always, the pace of play is blisteringly fast and can be hard to follow at first, thanks to lasers popping off everywhere and projectiles sizzling across the screen.

However, where this latest instalment shifts even further away from previous entries is the implementation of the Infinity Stones from Marvel Comics. Each team can head into battle carrying one of the six – Reality, Power, Time, Mind, Space and Soul. These can seriously shake up the flow of a fight when utilized correctly, leading to a surprisingly workable system that’s both neat and surprising. 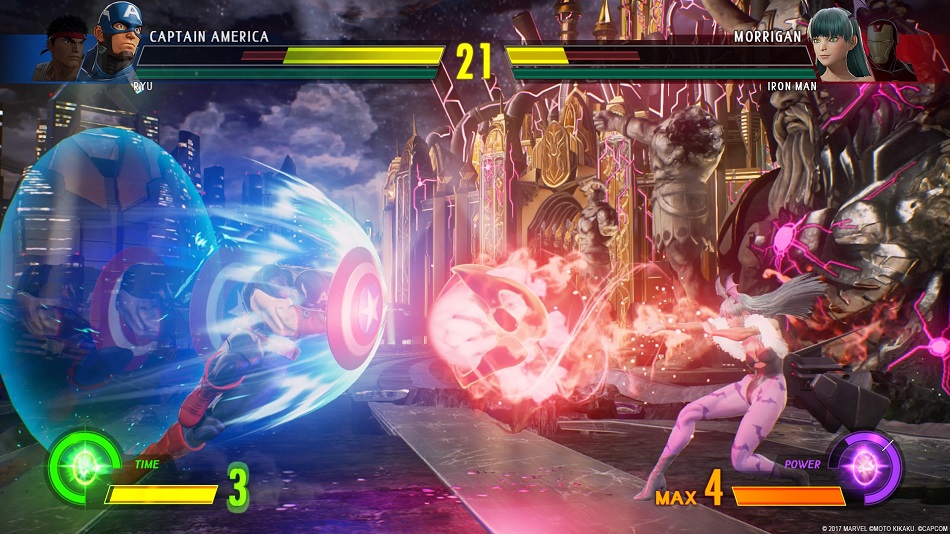 For example, the Soul Stone’s basic attack will whip out a beam of light similar to a projectile and steal the life of enemies, transferring it back to its user and recharging their health. Once it’s charged up enough to activate its full potential, players can then unleash a brief sequence where their partner will jump in alongside them to viciously double-team the enemy, even if the partner had been previously knocked out during the round.

Then there’s Space, which has a super that will trap enemies in a tiny box for its duration, seriously restricting their movement capabilities. Pretty handy when low on health and trying to escape from a determined rushdown in order to recover some health. The Mind stone will charge its users’ super meters at a vastly accelerated rate and… well, they all have handy little benefits attached to them which so far don’t seem to unbalance the game. Honestly, they’re pretty cool.

The available modes offered in MvCI are standard for the genre.

The new story campaign is a mediocre romp with heroes such as Captain America and Ryu taking on villains like Ultron and Jedah to undo the convergence that smashed their realities together. The script is terrible and it all ends abruptly in an unsatisfying cliffhanger, but it’s not offensively bad…  though perhaps that’s because my brain went numb by the time I’d finished. There is a bit involving Haggar and Frank West that almost makes up for how bland the rest of the story is, though.

There’s also an arcade mode in there (a fact which now needs to be pointed out post-Street Fighter V) and the online matches I’ve played have had almost perfect connections. There don’t seem to be a lot of players on PC so it may not have an active player base for long, but the netcode seems entirely competent.

As surprising as it is given how unappealing the package initially looks, Marvel vs Capcom Infinite is a decent brawler when all’s said and done. It may look borderline repulsive in spots, have a subpar soundtrack and be sporting a less interesting roster than previous iterations (and no, there’s still no sign of Sheva Alomar or Regina from Dino Crisis) but the fights are enjoyably high-octane affairs with solid mechanics, and as cliché as it might sound, that’s really what it’s all about at the end of the day. Rating: 7.5 out of 10

Parents: According to the ESRB, this game is rated Teen and contains Mild Blood, Mild Language, Partial Nudity, Suggestive Themes, Use of Alcohol and Violence. It’s all pretty safe and bloodless stuff throughout, despite millions having died in the story mode. Morrigan still talks her sexy talk mind, and… uh, frequently dips in and out of a seemingly Welsh accent. Not that that’s something for parents to be concerned by, I just found it really, really weird.

Deaf & Hard of Hearing Gamers: No major issues here, subtitles are selectable for both story and in-game dialogue. Certain audio cues will be missed when characters are pulling off special moves, but it’s no worse than other similar fighting games.

Honestly, i just felt like the cheesy lines were just….. too forced or just overwhelmingly face palming. Oh and the weird uhm close up shots of the facial rigging’s and models.