One over the eight 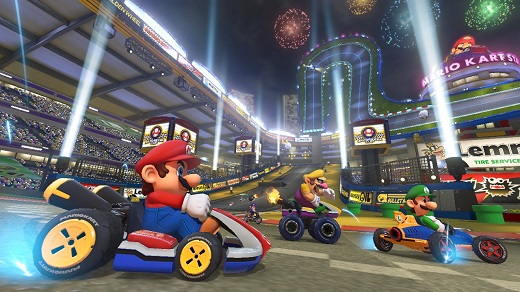 HIGH Rainbow Road, which is so beautiful and awe -inspiring that epic songs should be penned about it right now and passed down from generation to generation.

LOW The AI has undoubtedly improved, but it's still immensely irritating at times.

WTF It's a toss up between Luigi's death stare and the blue shell still being a thing. Gyah!

It's been a while since I last enjoyed a Mario Kart title.

At the risk of revealing myself as an antiquated old diddy who's probably seconds away from keeling over due to a cracked hip, the last one I genuinely got into was the SNES original. Ever since, the series has been a victim of an arms race against itself, with a reliance on ever-more ludicrous weaponry and rubber-banding AI designed to infuriate.

Many sequels have come and gone since then, and now Mario Kart 8 is here. To my surprise, it's actually kind of brilliant despite a few notable issues poking an irritating finger right in the gelatinous part of Mario's portly stomach.

First off, and perhaps most immediately obvious, it looks incredible. This beauty comes not through mere technical trickery, but thanks to stunning colors, artistic vibrancy, detailed environments and exceptional track design. The photorealism many racing game developers strive for is nice and all, but it largely pales in comparison to the unfettered joy on display here.

It sounds as great as it looks too. A few laps around Moo Moo Meadows should be all it takes to split most people's heads in half with a grin the Joker would be jealous of, and many of the other tracks are every bit as good. It's the first time the series has captured live performances for its audio, and the decision has paid off in spades with a toe-tapping OST that has hummable tunes laced throughout.

…And then there's the racing itself.

Players start by choosing from a wide variety of kart and bike parts for their selected character before setting off. This flexibility allows players to custom-tailor vehicles to suit their preferences, and once on the road the game just feels right—the handling's sharp and responsive, and drifting tightly into corners is both thrilling and rewarding, providing an additional speed boost for those who find standard cornering beneath them. Make no mistake, it's tactilely superb.

There's also a plethora of small things that liven things up while out on a course. Hitting a jump when rolling over certain obstacles will make characters perform little tricks before blasting away at higher speeds upon hitting the ground. Getting too close to angry Piranha Plants results in getting munched, and certain ramps cause a parachute to deploy for safe drifting over obstacles for a limited time. There are even anti-gravity sections for vertical superiority, and an insane amount of shortcuts that clever (or brave!) drivers can use in their bid for first place.

Weapons have been toned down a bit from previous games, meaning that it's usually possible to race more than a hundred yards without getting smacked by an oncoming bus or blasted by lightning. Some tracks are certainly better than others—it'd take some doing to convince me that Twisted Mansion's on the same level as the jaw-dropping Rainbow Road or Sunshine Airport—but the majority of courses are great drives with unique and quirky twists to make them memorable.

Online's also available and… well, it's exceptionally well-implemented, too. Over the course of five hours, lag never once reared its ugly head, and the voting system for courses is fantastic—once everyone selects a preferred event, a roulette wheel gives it a little touch of random chance. This means that the player base can't just pick the same course over and over ad-nauseum, but there's still a higher chance of favorites being chosen.

So, Mario Kart 8's awesome? Damn right it is. However, if it seemed like I was going overboard with praise up until this point, here's where the lovefest gets a little bit rocky…

First off, the AI racers are still monumental pains in the ass. They're largely fine in the 50 and 100cc speed classes, but if they're not cheating in 150cc, they come pretty damn close. Item abuse becomes more commonplace, and usually at the very worst moments possible.

One memorable example was during an ace run in Toad's Turnpike. My run was flawless and I was mere inches from the finish line. Out of nowhere and for no reason, Baby Luigi casually sped on by and clinched gold in the final race of the set. Having scrutinized all available resources on the matter and thinking it through over many restless nights, I've come to the only reasonable conclusion: Baby Luigi is a human pile of garbage. It's not just him, either—stuff like this happens too many times during the 150cc matches to gloss over as quirky twists of fate, and there's no way to restart a single race. One moment of AI bastardry leads to having to redo the entire Grand Prix.

My other issue concerns longevity for solitary players. Aside from unlocking some custom parts or trying to obtain gold trophies in every event, there's not much to do. The racing is great, but there just aren't any hooks to keep on playing. A well-designed career mode or more integrated and valuable rewards (both M.I.A.) might have helped provide them.

Oh, and the less said about the unwarranted assassination of Battle Mode the better. They've taken the superb arena-based deathmatch from my youth and replaced it with a standard race on standard courses where the main difference is that everyone has a limited amount of ‘lives' available. This completely misses the point of the original mode, which was to funnel players into a tense and awesome maelstrom of sheer carnage. Shame.

Mario Kart 8 is pretty great in many ways, but undoubtedly moreso with a collection of friends to play with, or when facing off against other players online. Solo racers still have a solid game to enjoy, but the occasionally-infuriating AI and no real career mode limits its appeal in the long term. Everything else about Mario Kart 8? It's pretty much amazing, and that's no lie. Rating: 8 out of 10


Disclosures: This game was obtained via retail store and reviewed on the Wii U. Approximately 15 hours of play was devoted to single-player modes (completed multiple times) and 6 hours of play in multiplayer modes.

Parents: According to the ESRB, this game contains comedy mischief. Oh, and Luigi's infamous death stare.

Deaf & Hard of Hearing: Sadly, important information about the moment to moment situations encountered in Mario Kart 8 will be lost for the heard of hearing—many enemy attacks have audio cues associated with them such as the whistle of a green shell approaching from behind. It'll still be possible to enjoy the game, but at a certain disadvantage.