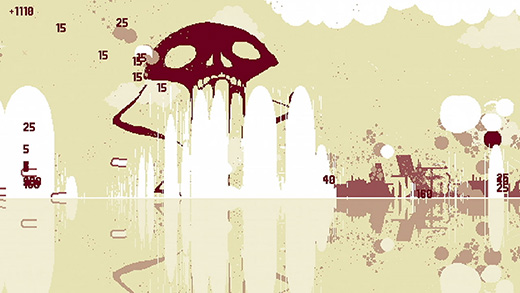 High The music kicking into high gear as the dreaded blimp pokes through the clouds.

WTF Some of the unlockable color schemes are seemingly designed for the sole purpose of making eyeballs bleed.

Luftrausers doesn't mess around getting to the point.

The player's aircraft launches from a carrier in the middle of the ocean with one objective—to blast the hell out of anything unfortunate enough to be in the general vicinity. Whether it's gunships, battleships, dogfighters, blimps or submarines that get in the way, it's all fair game to this airborne homicidal maniac as it spits bullets and bombs with reckless abandon.

The plucky airship's controls are elegant. Left and right will aim its metal snout, then another button engages thrust to blast it towards wherever it's pointing. The neat thing about this setup is that it allows for some rather fancy manoeuvres like stalling the engine to spin around and dispense death while throwing off enemy firing trajectories at the same time.

The feel of Luftrausers is excellent when shearing between laser blasts and praying that an errant projectile doesn't blow the ship to hell. It's exhilarating stuff, as is the fact that the ship can essentially defy all known laws of physics. If barrelling into the sea is the only way to avoid a barrage of gunfire, that's entirely possible.

Given how hectic everything can get onscreen, a single blow wiping out the aircraft would render the game unplayable. Thankfully, the ship can take a bit of a pounding before going up in flames, and can also heal itself as long it isn't attacking. This risk/reward system is both obvious and well-implemented, so knowing when to press forward with guns blazing and when to beat a hasty retreat is key to victory.

While Vlambeer has nailed how Luftrausers feels, the overall design doesn't quite stand up, often seeming slightly incoherent.

For example, my best score didn't come through any degree of skill on my part, the game just hurled countless waves of cannon fodder at me, leading to my kill multiplier going through the roof. Taking on larger enemies runs the risk of vaporizing both the player's ship and the score multiplier, so this swarm of low-risk adversaries helped me obliterate my old high score in the most circumstantial manner possible. It also destroyed my interest in taking the score attack seriously.

Another issue is that the player's visibility is limited to what's on screen, but that doesn't prevent off-screen projectiles from flying in. After a while these unpredictable streams of doom became increasingly annoying, and my general reaction at getting caught out in this manner went from ‘oh man, they got me' to ‘bugger this', culminating at the point where I'd just shrug my shoulders after going from full health to stone dead in less than a nanosecond.

Luftrausers is a great pick-up-and-play game in the short term, with most sessions providing a few minutes of entertainment before culminating in a bloody ship-shattering climax. The experience does wear thin over time, though, and can be a source of genuine irritation thanks to instant obliterations and the game's fickle enemy-spawning system. It's solid in small doses, but lacks the structural integrity to make it truly special. Rating: 6.5 out of 10


Disclosures: This game was obtained via publisher and reviewed on the PC. Approximately 6 hours of play were devoted to the single-player mode, and the game is impossible to complete. There are no multiplayer modes.

Parents: According to the ESRB, this game contains: mild fantasy violence. And a great big grinning skull whenever the nuke goes off. Brr.

Deaf & Hard of Hearing: Very little of the game relies on its sound, which emphasizes the soundtrack over audio cues. No real problems here.