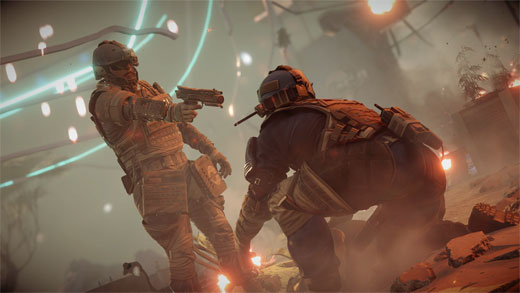 Every new console launch needs at least one First-Person Shooter, right? Of course it does, so Sony's offer is yet another installment in the Killzone franchise. In Shadow Fall

, it's been thirty years since the Helghast were soundly defeated by the ISA, and now it's time for some peace and quiet. Hooray! However, their leaders still want nothing more than to wipe the other faction off the map, and thus the stage is set for a titanic showdown to show off what the Playstation 4 is capable of. Oh, and something involving the horrors of war and stuff. Whatever. Developers have some new hardware to play with!

The OWL's a neat device. It's a little robotic buddy that can stun and shoot enemies, shield the protagonist from enemy fire, or even transform into a handy little zipline for diving all over the place. Take a bullet to the sternum and this binary soul will be right there patching it back up as good as new, so long as there's an adrenaline shot on hand. He's neat, and for that matter so is the enemy tracker – fire it up and all potential threats will be highlighted, even through walls.

Shadow Fall looks nice, too. Aside from being artistically beautiful, it provides a good visual reference in letting players know just what the Playstation 4 is capable of producing compared to the Playstation 3. The only place where it slips up are on some of the Helghan refugee models who look like they're taking refuge from the last generation.

The writing in Shadow Fall is literally insane. Case in point – there's a cutscene where the protagonist is hanging off a futuristic helicopter with a gun pointed at his head. A QTE prompt flashes up and the protagonist – in full view of his gun-toting aggressor – casually reaches down to retrieve a knife and stabs the dude in the foot. Couple this hard-edged realism with a demented storyline in which everyone involved is a complete tosser, and it becomes impossible to care whether anyone in this filthy universe lives or dies. From the scientist who sadly confesses that she 'might as well be dead 'without causing the genocide of either the Vektans or Helghast (either one's fine apparently) to the mission handler who questions the loyalty of anyone who dares think that wiping out an entire race might be a tiny bit overkill, the game would have been improved if every major character was stuffed into a blender and mulched into bastard puree.

The game's levels delight in being unclear, since getting lost while playing through the semi-open environments is a common occurrence. Some might consider this ‘exploration', but they're the same swivel-eyed lunatics who'd classify getting run over by a speeding car as an exciting twist to their daily routine. It's dreadful, and happens way too often – if there's nothing to be gained from heading off in the wrong direction and wandering around until stumbling across the proper path, why even have it as an option? At least have a Dead Space-style navigation tool outlining the correct way to progress for those who end up lost.

The confusing map design is one thing, but dreadful design decisions are common, with nearly every terrible design decision from the past decade of First Person Shooters making an appearance. From stealth sections with poorly-explained fail states to sections with irritating, awkwardly-handled instant-death environmental hazards, Shadow Fall really does have it all when it comes to lacing its core gameplay with joy-destroying pointlessness. One memorable example was when, shortly after murdering a swathe of enemies, hopping down from a knee-high ledge caused my Shadow Marshall to spontaneously implode and sent me back to the last checkpoint before the encounter. The designers had evidently decided that this bit of rock was out of bounds, and then decided that it would be a hilarious wheeze not let anyone know about it.

As for the freefall sections, the less said about them the be… ah, to hell with it. Whoever is responsible for sections with players awkwardly flailing through space while repeatedly crunching into bits of debris before being forced to restart as their limbs get sheared off from the impact should be shown the door.

There's also the enemy encounters themselves, of course. Helghast grunts largely acquit themselves well — they're a bit stupid and run into walls on the odd occasion, but they make for decent cannon fodder. The flying and ground based drones are unimaginative, but entirely fine. Then there are enemies like the box of spider drones; a box which, as the name suggests, perpetually vomits spider drones in the direction of the player until they've been destroyed by chewing through several magazines of ammunition. Even now I find it hard to believe that these monster closets passed the initial design phase, along with most of my other reservations regarding Shadow Fall's overall lack of quality. Don't even get me started on the multiple sections where players are expected to lug keys around empty maps for extended periods of time, nor the inexplicable bullet sponge of a terrorist leader encountered in the closing stages of the campaign.

The multiplayer manages to claw back some dignity, but it's not without its own issues. The map design heavily favours chokepoints where Helghast and the ISA will enter concentrated wars of attrition – most of the map space is wasted even with 24 players running around. It's also a mode where camping is king, and attempting to lock down the other team's spawn points is a real and viable tactic in Team Deathmatch. For some this will be paradise, for others it'll lead to extreme irritation regardless of which team is currently being ground down into mince.

There are some highlights though. Each class feels substantially different from one another and allows for various approaches. I tended to grab a support class with a shotgun and spawn beacon, hiding around corners to call in teammates and blowing everyone who stuck their nose into my business in half. It honestly offered some good times, dishing out just the right mix of frustration mingled with the joy of success, but again the overall design remains lacking.

is a failure on multiple levels. The campaign is a detestably inferior product when pitted against most of its competitors. The multiplayer fares way better, but there's plenty like it on the market already competing for player's attention. The real problem is that rather than trying to do one thing well (ensuring that riddling Helghast aggressors with bullets provides a damn good time) it ends up trying to provide all sorts of additional variety throughout the campaign – none of which amounts to much good. In attempting to juggle so many balls at once, it simply loses control and bats them all over the place in a crazed, lurching frenzy as it tries to stop the whole thing from falling apart. Rating: 5 out of 10


Disclosures: This game was obtained via retail store and reviewed on the Playstation 4. Approximately 7 hours of play was devoted to single-player modes (completed 1 times) and 11 hours of play in multiplayer modes.

Parents: According to the ESRB, this game contains blood, intense violence and strong language. Loads of shooting, loads of killing, and plenty of swearin' – this is not kid-tested and mother-approved stuff.

Deaf & Hard of Hearing: A lot of peripheral information is conveyed though the sound design, such as enemy placement. The usual subtitles and hit indicators are present and accounted for.

Thank god I’m not the only one who hated this turgid disaster of a game. What a mess.

The free-fall onto Helghan is one of the most inexplicable sequences I’ve played in a game in years. It is impossible for me to imagine the person who thought incorporating it into the game was a good idea. I mean, sure it shows off how prettily the PS4 can do dynamic environments, but the segment is an obvious stinker that couldn’t be more effective at inducing a player’s rage and hatred if it had been specifically designed to do so. Of course, the developers might have been distracted by how much of a disaster the rest of the game is.… Read more »

“Why can the protagonist suddenly fire rockets out of his face whilst airborne?”

As noted, the campaign on offer here is spectacularly terrible in most aspects and a sterling example of taking stuff that sounds cool on paper and shoving it into the final product regardless of whether it works or not. The fusion reactor’s another sequence that almost made me spew up my face in disgust. All other issues aside, it just wasn’t a great deal of fun. Most of that final score centres around the fact that the multiplayer’s at least competent, even if it does primarily cater to reprehensible scumbags like myself who’ll cheerfully set up an automatic turret directly… Read more »