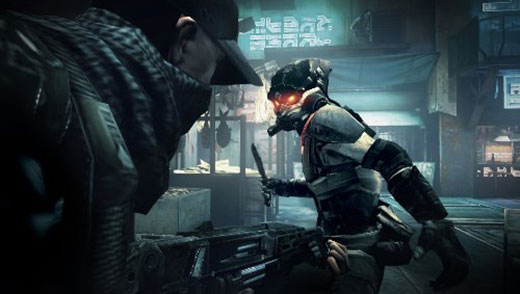 LOW No mid-mission saves on a handheld game?

WTF They developed a stealth droid specifically for spiking people in the ears.

is a first-person shooter that plops players into the combat boots of Arran Danner, a mercenary whose chosen career path is stabbing or shooting people at the behest of whoever is willing to pay for his services. Most of the time he'll be working for the ISA in a bid to wipe out the invading Helghast forces – the war apparently started out of their envy for the Helghast's way cooler uniforms – but that's not to say that he's above switching sides for the right price.

Helping Danner in his fight against murderous Helghast scumbags is Blackjack, a mysterious arms dealer granting him access to all sorts of vicious weaponry for a price. And when I say ‘all sorts', that's exactly what I mean – from tranquilizer guns and grenade launchers, all the way through to suits of body armor and cutting edge Vanguard systems. These Vanguard systems are specialized robo-devices with specific traits – one may focus on stealthily drifting through the air before shoving steel spikes into unprepared earholes, another may call down devastating airstrikes from military satellites or simply shield the user from frontal attacks. Whatever their purpose, they're a blast to use.

The Vita's touchscreen is used intelligently throughout gameplay—enemies can be interrogated for fun and profit, with the touchscreen used to help players reach out and touch someone. In the teeth. It's the kind of touchscreen integration that actually works, with quick swipes of a finger translating into quick swipes making an enemy's head bounce off the concrete. Hacking is also done via touch, rapidly selecting shaped patterns that fit a puzzle correctly. It works beautifully, creating possibly the only hacking minigame in the past ten years I'd actually call an enjoyable diversion.

The tale Killzone Mercenary weaves is surprisingly competent, though the primary focus on mercenaries means that everyone is contractually obliged to talk about money every four nanoseconds. Even so, it sets up for a well-paced jaunt interspersed with a lot of cool setpiece moments scattered throughout. One particular escort quest not only flips the entire concept of these quests on its head, it's also one of the best FPS sequences in recent memory on any platform.

Getting back to the mercenary side of things, this focus on money means that everything a player does during gameplay will earn cash that goes towards purchasing upgrades. The more skillful the killing, the more bankroll earned. Headshots earn more than bullets to the torso, stabbing someone in the back earns more than knifing them in the front, and ghosting through an area undetected will earn a stealth bonus. It's a high-score system with tangible benefits, and it does a great job of encouraging players to employ more thought and effort than they otherwise might.

Mercenary also handles its online side quite admirably. There's something brutally satisfying about piloting a Mantis stealth droid into the back of an opponent's head and rummaging around in his brains with a pair of spikes, or taking them on a short interrogation trip they're unlikely to survive.

Aside from the typical solo and team deathmatch modes, there's also the Warzone playlist which is a five-round objective-based mode where killing opponents isn't the only goal – for instance, one round demands that the enemy be interrogated, so simply blowing them away isn't going to net any points for the team — not that this stops the more buffoonish members of the team from gunning down enemies and costing everyone their hard earned points, of course. It is an online game after all – but it's a damn good one, some questionable spawning issues aside.

Given that this genre doesn't make it to handhelds very often, it's mentioning that the graphics are good – really, really good. The only noticeable compromise comes from the framerate. While it doesn't quite offer a steady 30 fps, it never dips below ‘solid'. It always remains entirely playable, and given the amount of graphic content in the environments, character models and animation, it's one seriously impressive visual package.

Mercenary does almost everything right in migrating Killzone to a handheld device, but there are a few minor issues that are disappointing. First off, the loading times are quite noticeable between levels. There's a minimal amount of downtime once everything's loaded, it just takes a while to get there.

The second, more serious problem is that there are no mid-mission checkpoints. This would be unusual in a console release, and it's absolutely baffling here given Mercenary's handheld nature. Each level of the campaign usually takes about half an hour to play through, and that can potentially lead to a number of instances where the Vita will have to be put into sleep mode while playing in public.

Those minor issues aside, Killzone: Mercenary

is far more than a technical display – it's a finely crafted game that can easily last beyond its excellent campaign with exceptional multiplayer offerings and an absolute ton of bonus items and weapons to unlock. As far as handheld shooters go, Killzone: Mercenary is undoubtedly the new gold standard and, quite frankly, makes a mockery out of its handheld peers. Rating: 8.5 out of 10

Parents: According to the ESRB, this game contains Blood and Gore, Intense Violence, Language, Partial Nudity. Players use machine guns, shotguns, sniper rifles, and melee attacks to kill human soldiers. Some weapons can decapitate enemy soldiers. The game also depicts intense close-up attacks: slicing of enemies' throats, stabbing through the head/pelvis. Players also have the ability to kill non-adversary characters (e.g., civilians) in the environment. In one mission sequence, corpses can be seen hanging from rafters; the figures' buttocks are exposed and sometimes visible. The word "sh*t" can be heard in the dialogue.

Deaf & Hard of Hearing Gamers should employ the usual caveats.  The dialogue is subtitled so the story is excess of all, and there are also damage to indicators displayed on-screen during battle, but sometimes enemy locations are given away through audio cues which are not visually represented.