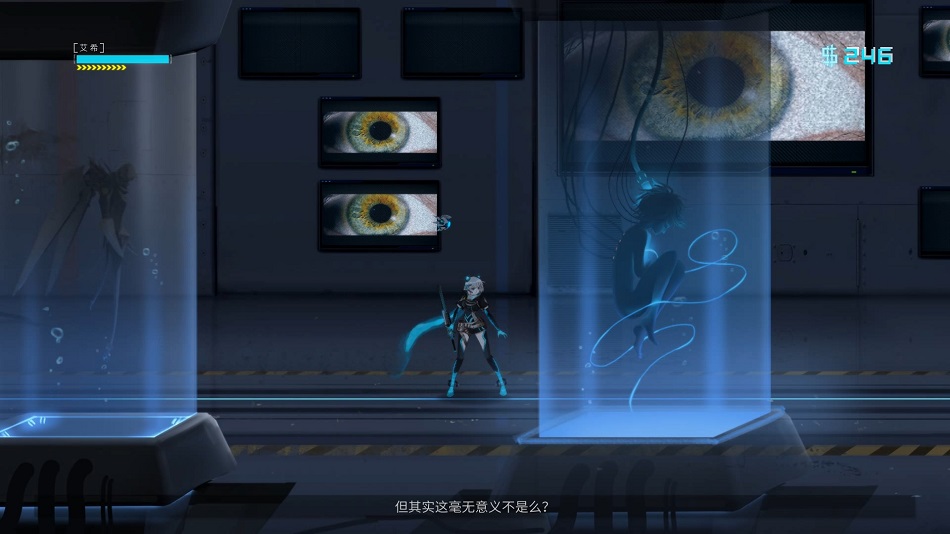 HIGH Tracking down an unfinished section of the game, then hearing the resulting explanation.

LOW Most of these enemies should be way more interesting to fight.

Warning: The following review contains spoilers about the core gameplay concepts of ICEY.

For anyone interested in playing this title and having a fresh, untainted experience, know that ICEY is well worth the asking price despite a few minor issues here and there. It is, no pun intended, a pretty cool game.

If you read past this point, you may be spoiled. Fair warning!

When it comes to playing videogames, following basic instructions is a pretty important requirement for success. Sure, those loose cannons among us might occasionally rebel and press the X button even when it CLEARLY says to press start at the title screen, but when the prompt says ‘disarm the nuke before it wipes out the solar system‘, it’s usually a good idea to do so. Doing the opposite generally leads to a checkpoint restart and a brief period of soul searching over why not disarming that nuke felt like a good idea at the time.

ICEY isn’t that kind of game. From the start of the adventure right up until its final moments, players are encouraged to ignore the omnipresent narrator in favor of doing whatever the hell they feel like doing.

On its surface, it’s a neat 2D melee combat title offering air dashes, perfect counters, cool attack strings, excellent mobility and a surprisingly accomplished combo system available to players from the get go, with additional moves and abilities that can be unlocked later on. If the enemy’s combat maneuvers were as well designed as ICEY’s own skills, it’d be a pretty special game. Unfortunately most of the enemies aren’t really that interesting to fight, and there’s little variety amongst them, squandering what is an impressive amount of potential for some truly kickass action sequences. 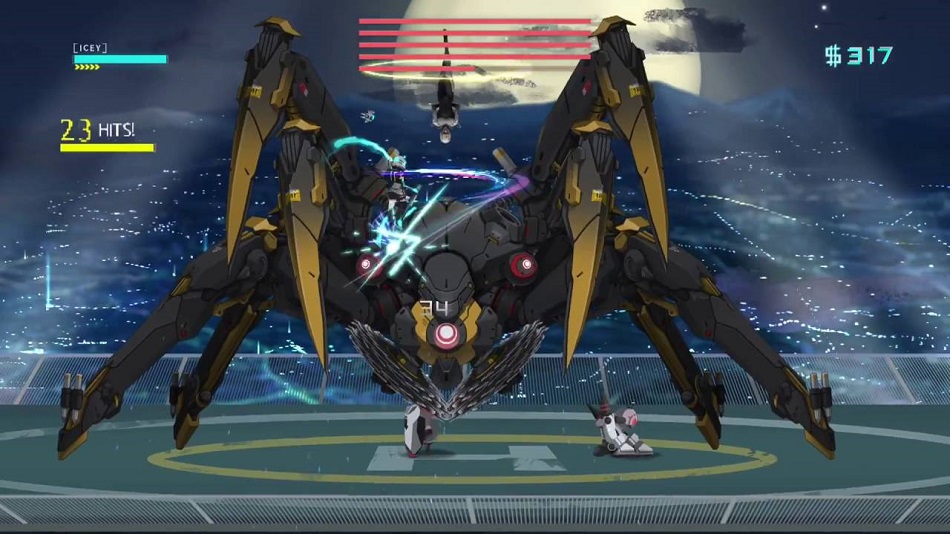 However, there’s more to ICEY than initially meets the eye. Whilst our titular heroine is ostensibly sent off to hunt down and kill an enemy known as Judas for reasons that are initially rather vague, the player can interrupt this quest any time they feel like it. If the narrator booms out that ICEY ran to the right before hopping over a small hole, running to the left or intentionally plunging to her death can result in the narrator freaking out, getting confused or… well, doing whatever it feels like doing when reacting to such buffoonery.

Exploring the world or otherwise refusing to behave as ICEY is expected to will lead to a number of amusing jokes, mental breakdowns and fake endings being dished out. Spoiling them would be a shame so I’ll avoid doing that, but most of them are well worth taking the effort to seek out – they can go to some weird, weird places. It’s a little bit like The Stanley Parable, in fact, just with a decent combat game tucked underneath instead of being married to a walking simulator.

ICEY isn’t a particularly long game (I got every ending and achievement in about four hours) but this just means that the experience is rather sharp and sweet as opposed to something that drags on and wears out its welcome – and given that it’s fairly cheap in the first place, it certainly doesn’t feel like the overall package is lacking in value.

So yeah, I’m pretty fond of ICEY. The combat could (and should) be better but I enjoyed my time with it, and appreciated its willingness to whip out the sort of unexpected, bizarre narrative twists that most games don’t even consider. Rating: 7 out of 10

Disclosures: This game is developed by Shanghai Fantablade Network Technology Co. Ltd. and published by XD Network Inc. It is currently available on PC and PS4. This copy of the game was obtained via publisher and reviewed on the PC. Approximately 4 hours of play were devoted to the single-player mode, and the game was completed with all endings. There are no multiplayer modes.

Parents: According to the ESRB, this game is yet to be rated. There’s not much to freak kids out with here, it’s a cartoonish game without much blood in it and a good sense of humour. Enemies are mechanical and… yeah, I can’t see much issues with kids playing it other than not getting some of the jokes.

Deaf & Hard of Hearing Gamers: There are plenty of subtitles available for the narrator’s lines, and while some audio cues for attacks and other events may be missed, I don’t think it’s a huge problem.

Remappable Controls: Yes, this game offers fully remappable controls – at least for the Keyboard options. I couldn’t see one for a controller, which is definitely the preferred way to play.