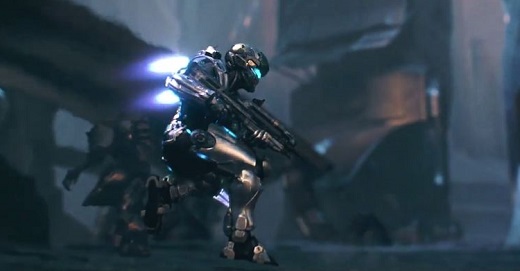 HIGH The beginning of chapter thirteen is cool, and Exuberant Witness is awesome.

LOW The suicidal conveyor belt of failed AI revives. I wouldn't trust these braindead Spartans to open a tin of peaches without adult supervision, let alone save humanity.

The Chief is back!

Fortunately, a new protagonist known as Spartan Locke and his team of supersoldiers is on the scene to chase Master Chief down for going AWOL—apparently he's trying to save the world without being bogged down by bureaucracy.

For most of the campaign, players will be in charge of fresh-faced Locke. It's an odd choice given how well character swaps typically fly with the general audience—Metal Gear 2 and the DmC reboot can attest to this. In this case, though, it's not a particularly bad thing since Chief and Locke play identically.

Once players start digging in to Halo 5, they'll quickly notice that it looks awesome. Running at 60 frames a second and stuffed full of detail, these damn fine environments are great to run around and kick some ass in. There's a welcome new verticality to them as well, which largely compensates for the slightly more linear progression than is typical of a Halo game.

New abilities help spice things up throughout, allowing for some additional mobility whilst engaging foes. A charging ram smacks foes across the room, a boost dash helps get out of tight situations quickly, and several other additions such as the ground pound aerial slam increase variety when destroying foes. Oh, and Halo finally got with the times—holding down the left trigger is the default method of aiming down sights now.

There's also a new focus on teamwork, with the campaign always featuring other Spartans fighting alongside Chief and Locke. They can be instructed to target enemies, man turrets and revive anyone who goes down. Don't get too excited, though—they're a bunch of idiots. These numbskulls often get trapped in ‘conveyor belt deaths' as they slowly shuffle over to the downed player, turn their back on enemies, and then get mauled before the next Spartan does exactly the same thing.

The campaign's a little short overall, but it still offers good times. Smashing through walls to take alternate routes, frequently dropping spent weapons and improvising with whatever's available, flanking enemies and dying repeatedly on Legendary mode—it's all present and accounted for. A few more setpiece moments like the vertigo-inducing sequence in chapter thirteen would have been welcome, but it's solid overall.

The multiplayer's a mixed bag. Not due to any hard failings of its own, but because I'm absolutely garbage at it. There's been a ton of times where I've had the drop on someone, sent five magnum rounds into their noggin, then been blasted apart by one of their buddies before I could ‘finish the fight' unless collapsing in a lifeless heap counts as finishing the fight, which I suppose it does.

See, this is a multiplayer mode that caters primarily to people who are damn good at Halo. As ever (and quite irritatingly in my opinion) precision and power weapons rule over all. An assault rifle or submachine gun are okay for dealing with enemies in close proximity, but a battle rifle, magnum or DMR is effective anywhere on the map, at any range.

If an opponent can be seen, they can be killed, so idiots like me who want to go bananas with a fully automatic weapon are out of luck. I've been in matches with people who blasted my face off with a magnum when I couldn't even make them out in the distance, and the only time I ever really got revenge was when I began camping around corners with a shotgun or rocket launcher primed and ready. Yep, I felt dirty.

While many of the modes in multiplayer are lifted from earlier title—Slayer, Capture the Flag and the like—there's one big new addition to the mix in the form of Warzone. It sounds amazing: there are twelve players on each side trying to establish control of multiple bases with AI enemies wandering around making life difficult. Sadly, it's little more than a team-based tug of war, with the occasional AI enemy warping in from time to time with varying points values attached to them. That's not to say the mode isn't good, it just doesn't create the fusion of singleplayer and multiplayer I'd envisioned.

The other twist to this mode is that requisitions can be called in after powering up through kills and objectives. Different gear is available, like calling in a Scorpion tank, or buying a nice little shotgun for base defense. It's an interesting idea, but it's let down by requiring players to spend 'cards' to obtain most of the goodies. No Mantis cards available? No Mantis for you, buddy. Worry not though, packs of random cards can be bought for a small fee on Xbox Live. Hooray!

To be fair, these packs can also be earned by simply playing the multiplayer, but it's tough to see how 343 can claim it doesn't affect gameplay when some players will be able to roll out heavy ordinance while others will have nothing in reserve to counter. Getting utterly demolished by a superior team is rarely enjoyable in Halo, and when that superior team has a clear weaponry and hardware advantage, it becomes tedious. The lack of a post-death killcam also means that there have been plenty of times I've been left wondering just how my face suddenly imploded.

Halo 5, ladies and gentlemen. It's still a good shooter, but also overly familiar by this point. Maybe it's time to follow in the footsteps of the absolutely crazy intro cinematic and let the Spartans loose to wreak havoc on their enemies without fearing the fanbase complaining that it doesn't feel like Halo any more. In the meantime, it's still a good ride. Rating: 7.5 out of 10


Disclosures: This game was obtained via retail store and reviewed on the Xbox One. Approximately 10 hours of play was devoted to single-player modes (completed 1 time on Legendary with later stage replays on other difficulty settings) and 6 hours of play in multiplayer modes.