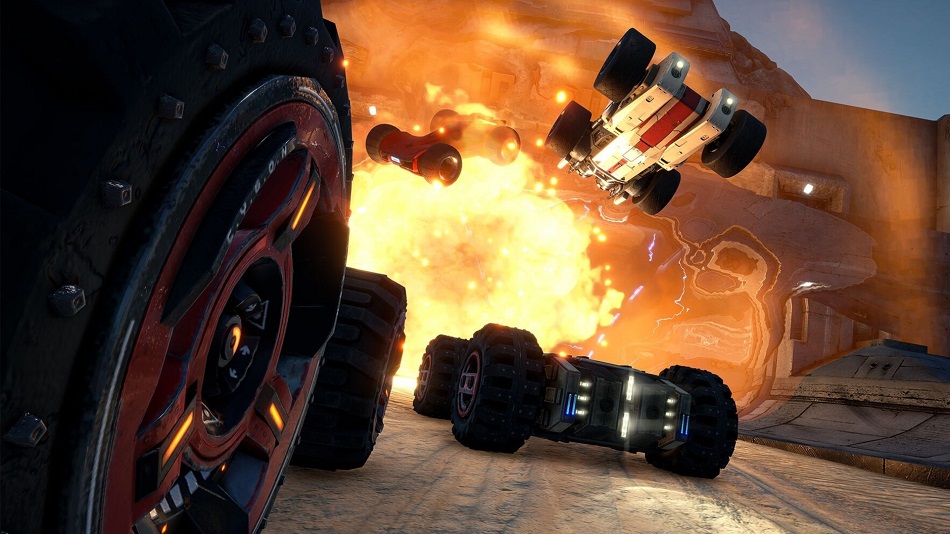 HIGH Driving on the ceiling at breakneck speeds.

WTF Thinking a particular direction is part of the race, then getting teleported back on track.

Hey, ancient gamers! Who remembers Rollcage on the original Playstation? C’mon, raise those hands. Not too quickly though, granddad… those old, creaky bones might snap under the strain.

For everyone else, when Rollcage came out in 1999, it was seen as a lesser alternative to WipeOut‘s futuristic blend of racing and combat with some seriously cool ideas behind it – ideas which have been appropriated and lovingly recreated by developer Caged Element in this tribute to one of the most niche (but beloved) racers of yesteryear. They don’t quite nail the landing, however. This effort doesn’t quite do enough to keep up with its contemporaries.

The most important selling point first – vehicles aren’t confined to the ground in GRIP. These buggy-like cars are often able to speed along racetrack walls and ceilings, swapping between them at will to snag speed boosts and powerups as they hurtle towards the finish line. If the player’s tires can touch it, the vehicle can likely race on it. What’s more, the tires are larger than the buggy, so if the tires touch the ceiling, the whole world will flip to accommodate racing upside down. It’s a cool effect.

However, despite offering more freedom (at least in theory) as to how a player can race, there’s an element of uncertainty to many of the courses —  while it may be possible to learn the best lines, GRIP is sorely lacking in how it conveys important visual information to the player. 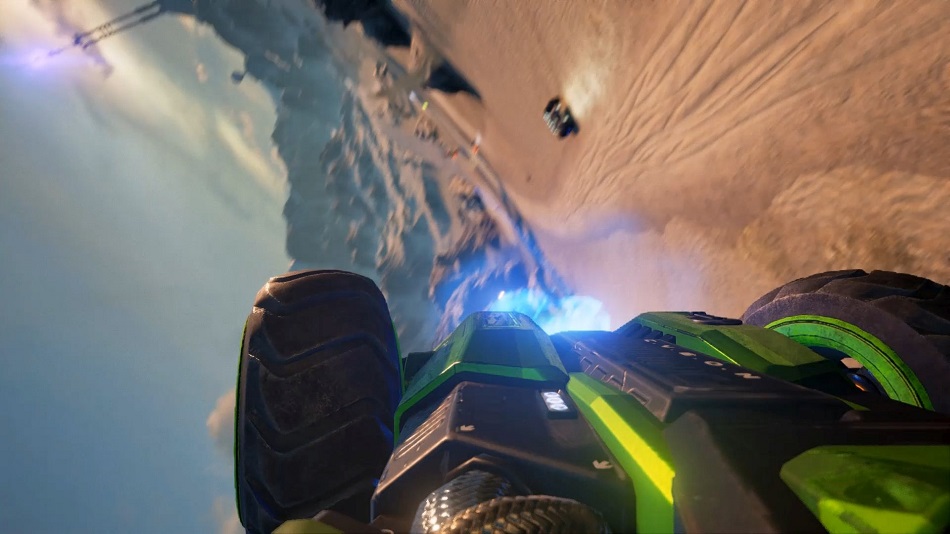 For example, during one of the first races, I hit a warning marker shaped like a ramp which resulted in an amazing display of airtime culminating in a perfect flip onto a distant ceiling where I sped along to victory and felt pretty damned awesome. Doing that in another course? The same move sent me crunching straight into a wall. It’s difficult to parse visual indicators that are supposed to signal what’s safe and what’s not while bombing down a track at speed, and in most cases, I had no idea if hitting a ramp would result in an aerial stunt or cost me the race.

Graphically, it’s an uneven experience as races are smooth and skull-shreddingly fast, but the environments disappoint, such as one track featuring twisting networks of city roads with almost no distinguishing features from start to finish. A few stand out like a gloriously atmospheric ice planet that’s significantly more open-ended than most, but apart from the graphics, the track designs don’t really take advantage of GRIP‘s gravity-defying qualities. Despite the nimble buggies being capable of so much, the bulk of the courses are pedestrian in nature. It’s a game that should loop the loops, switch rapidly between horizontal and vertical surfaces and require death-defying jumps across yawning chasms, but too many areas rely on featureless corners and wide open areas that fail to capitalize on GRIP‘s biggest selling point.

The title of the game mentions combat in addition to racing, and the devs don’t quite hit the intended target, so to speak. There are a large amount of weapons available — things like chainguns and missiles, to GRIP‘s version of the infamous Blue Shell from Mario Kart, as well as a number of powerups like speed boosts and rear shields. The problems are twofold – hitting opponents with weapons doesn’t have the required amount of crunch to satisfy, and getting hit results in awkwardly trying to reorient back to the track after a spinout.

It’s strange, really — everything about GRIP‘s sensation of speed and the cool armored vehicles makes it seem like ramming or blasting an opponent at full pelt should smash the bugger into the stratosphere. Instead, collisions are bizarrely lightweight, with both buggies just awkwardly grinding into one another and slowing to a near-halt. The style gives a lot of sizzle, but there’s no steak to be had. 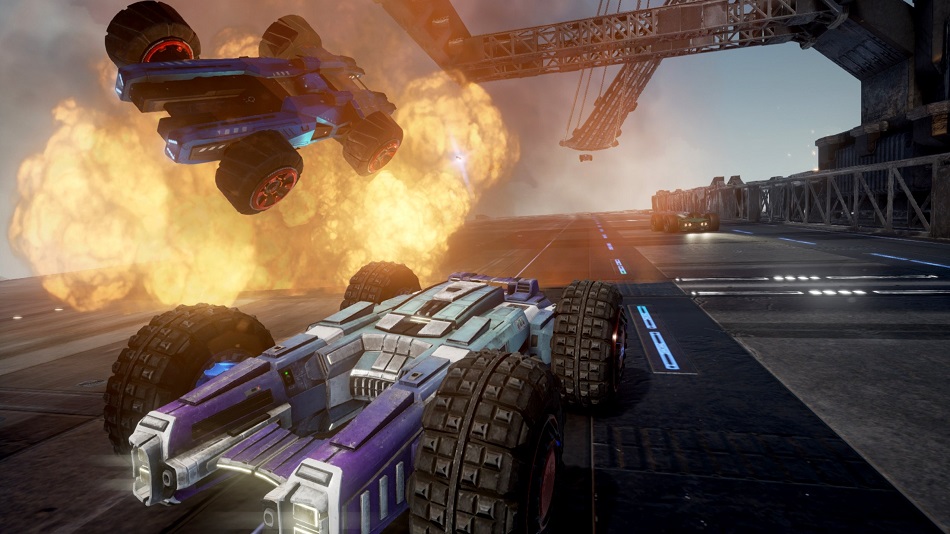 Apart from the standard racing-with-guns mode, there are a few other options thrown in for variety.

Arena and combat-heavy matches are an enjoyable change of pace, though I found myself getting progressively more irritated as the game would keep handing out useless power ups like speed boosts or shields. It’s tough to score in a combat mode when it’s impossible to attack. There’s also a ‘Carkour’ mode where players have to take advantage of the buggy’s maneuverability to reach it to a designated spot, which is a cool bonus and a neat little distraction.

The other highlight of GRIP is that there’s a good selection of multiplayer offerings, as well as the ability to host up to four-player split screen. That’s a rarity these days and I wasn’t able to test how it handles, but it’s great to see the option presented. There’s also a progression system that doles out new vehicles and skins on a regular basis, but nothing I unlocked during my time seemed particularly special.

All in all, I like GRIP more as a concept than I do in practice. Rough and tumble racing is fine, but the combat is shaky and it’s far too easy to accidentally clip a piece of scenery and get launched into race-losing situations. It’s also downright strange that a game which promotes driving like mad also requires navigating each track like I’m walking on eggshells. GRIP should bursting free of traditional racing constraints, but instead adheres to them more often than the ceilings. Rating: 5.5 out of 10

Disclosures: This game is developed by Caged Element and published by Wired Productions. It is currently available on PS4, Xbox One, Nintendo Switch and PC. This copy of the game was obtained via publisher and reviewed on the PS4 Pro. Approximately 10 hours of play were devoted to the single-player mode, and the game was not completed. 2 hours of play were spent in multiplayer modes.

Parents: According to the ESRB, this game is rated Everyone and contains Fantasy Violence. There’s nothing in this game that’s unsuitable for kids.

Deaf & Hard of Hearing Gamers: There are visual indicators alongside the audio cues to let players know when they’re being targeted, but they’re very easy to miss. It’s not hard to imagine deaf and hard of hearing players would be at a disadvantage here. 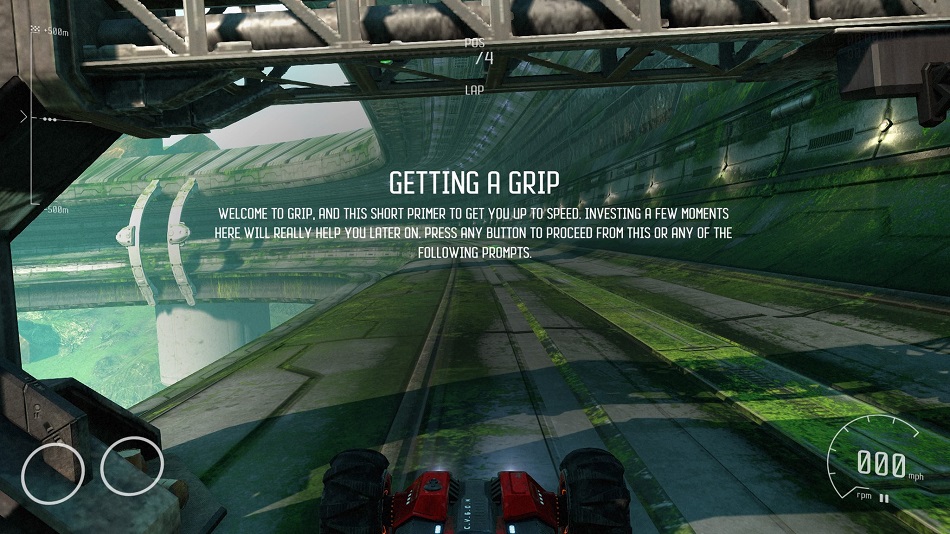 Remappable Controls: Certain functions are remappable. There are a total of three control types to choose from, though freely assigning keys on the PS4 version isn’t possible. 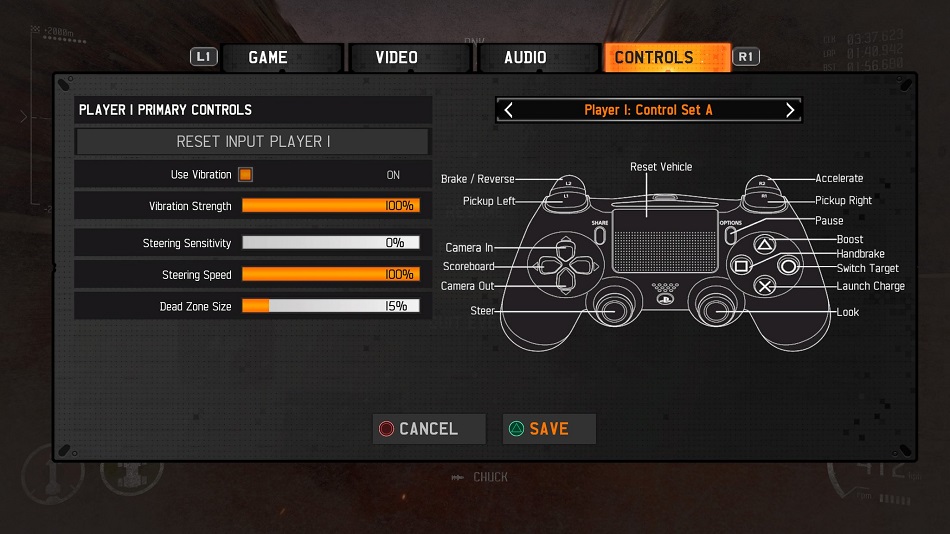