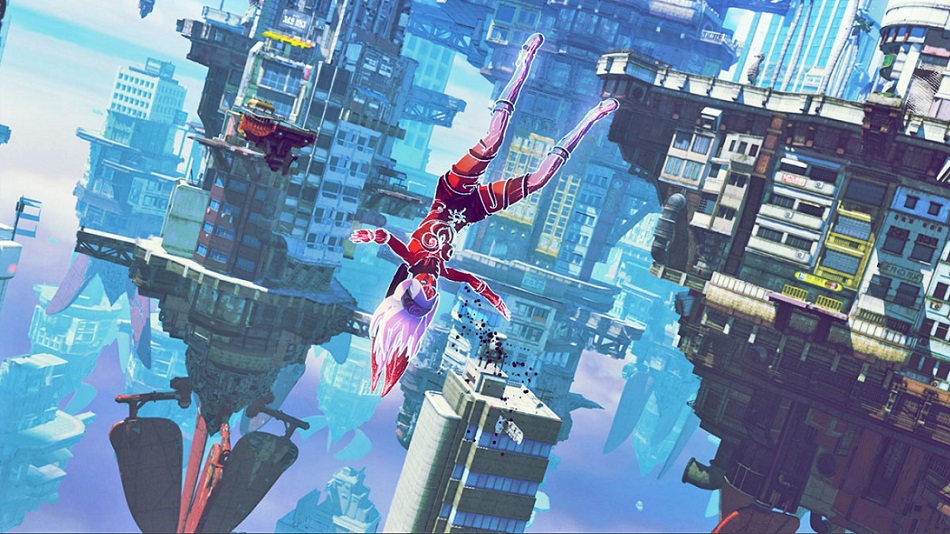 HIGH The gravity shifting mechanic never, ever gets old.

LOW The escort and stealth missions are downright archaic.

Full disclosure — I haven’t played the original Gravity Rush beyond the first twenty minutes or so.

I fully intend to fix that particular oversight as soon as possible, but I’m assuming that the ending of the original didn’t wrap with protagonist Kat being forced into near-indentured servitude… and yet that’s exactly how Gravity Rush 2 begins. She’s somehow lost all her gravity defying powers, but thankfully it’s not long before she gets them back.

This disempowered beginning is a stylish introduction to the world, and allows new players time to get comfortable with it — it’s a beautiful and dangerous environment where massive chunks of land float around like small islands in the sky. From there, it isn’t long before the player learns of this world’s rich relentlessly squandering their wealth on grotesque gestures of one-upsmanship while the poor live in squalid shacks and can barely afford extravagant luxuries like heat or food. Since our heroine Kat isn’t one to take this sort of injustice lying down, she soon sets out to put things to rights.

It has to be said that Kat makes for an excellent leading character. Sure, she can be a little naive at times, and nobody so much as blinks when groups of civilians get swept up in her gravity fields and inadvertently hurled to their deaths — but hey, she’s weirdly likable, unfailingly optimistic and cheerful in the face of innumerable threats.

Besides Kat’s charm, the core mechanic of Gravity Rush 2 is its biggest strength. At the touch of a button, she’ll start floating around in the air. Tap it again, and her personal gravity field will suddenly shift, causing her to fall towards whatever the camera is pointing at. It’s an insanely cool trick that opens up the world in some amazing ways, allowing her to stick to walls, slide across most surfaces, or just walk around the undersides of buildings and islands. She may not actually fly, but it’s closer to the feeling of flying than many other games have managed to accomplish. 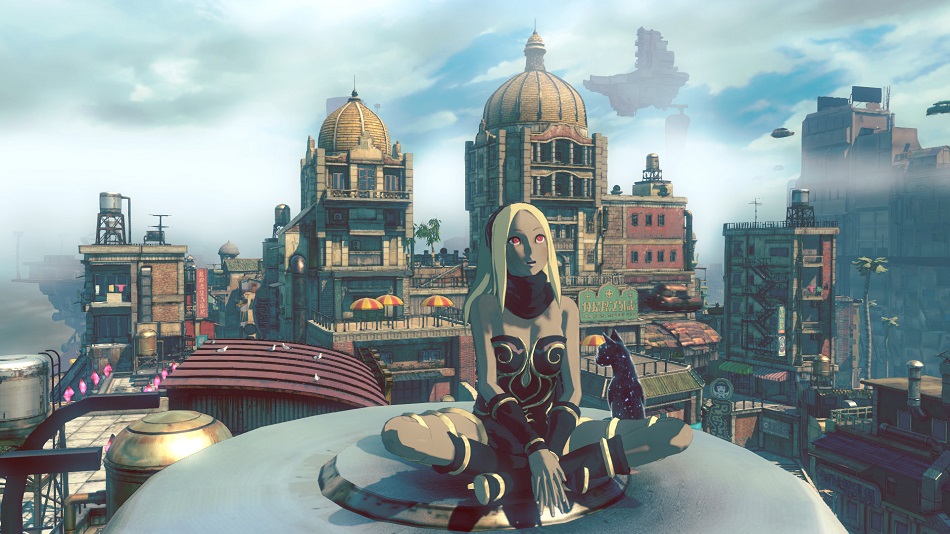 The combat revolves around gravity shifting as well. Enemies generally come in the form of humans or ‘Nevi’,  amorphous inky black blobs that can mutate into various forms. To combat them, she can fly around and perform gravity enhanced drop kicks, swipe up nearby debris in a gravity field and toss it at foes, or sometimes just grab the enemies themselves and hurl them off the edge of the world. The targeting can be a little tricky at first and she doesn’t lock on quite as well as she probably should when dropkicking bad guys in the face, but it soon becomes second nature.

Getting back to the world where Kat adventures, it’s a joy to behold — artistically stunning, rendered in a sort of cel-shaded manner, and there’s pleasure to be found in simply running around playing with gravity. Plenty of side missions are available, and there’s an integrated online mode where small challenges can find their way into Kat’s world. For example, someone playing Gravity Rush 2 might use their in-game camera to take a picture of a hidden treasure chest, and the photo they send to other players will offer clues as to its location. I spent a ton of time just zooming around performing these minor (but enjoyable) tasks, and the developers offer a hell of a playground to go wild in.

However, Gravity Rush 2 fails to reach full potential because some of the mission types are incredibly poor. Escort quests and stealth missions rear their ugly heads in abundance, and their fail states can trigger without warning. This leads to some rather annoying trial-and-error moments where simply poking Kat’s head out of an alley can necessitate an unexpected do-over.

Then there are intermittent sections which take place in tight corridors, leading to disorienting moments where the camera gets hung up on walls and winds up obscuring the view of nearby foes. Also awful are the thrice-damned ‘challenge tablets’ which usually involve being asked to smack some enemies around in an annoyingly stop-and-start manner. They’re largely awful, coming across more like lazy tutorials for skills that have already been mastered rather than intelligently-designed trials.

While these leaden moments don’t make up the bulk of the adventure, why they were included at all is a complete mystery. For a game whose strengths revolve around a fantastically beautiful world and the complete freedom to fly off into any corner of it, it’s bizarre that these missions limit the player in weird and artificial ways, taking power away from the player rather than encouraging them to use Kat’s abilities inventively. These feel like overly conventional and outdated design approaches for a game that breaks the mold in so many other areas.

Despite those disappointing decisions, I still had a blast with Gravity Rush 2. The world’s beautiful, the cast is great, and Kat’s unique powers make it feel unlike anything else on the market. If the mission structure was anywhere near as inventive and enjoyable as the rest of the package, it would be an essential (and mindblowing) experience. As it stands, it’s just a damn good time interspersed with a scattering of tedium throughout. Rating: 7.5 out of 10

Disclosures: This game is developed by SCE Japan Studio and published by Sony Interactive Entertainment. It is currently available on Playstation 4. This copy of the game was obtained via publisher and reviewed on the PS4. Approximately 47 hours of play were devoted to the single-player mode, and the game was completed. There are no dedicated multiplayer modes, though challenges from other players will pop up during play.

Parents: According to the ESRB, this game is rated Teen and contains blood, fantasy violence, mild suggestive themes, partial nudity and use of alcohol. I’d say it’s pretty safe for kids overall, save for one brief scene in a comic book style cutscene where someone gets impaled on a spike — that one instance is pretty out of place.

Deaf & Hard of Hearing Gamers: No real problems here — the game uses a made up language, so subtitles are always active and there’s plenty of indicators to point out where the action’s happening.

Remappable Controls: Certain functions are remappable, with a variety of button options available.