Anarchy in the Nippon 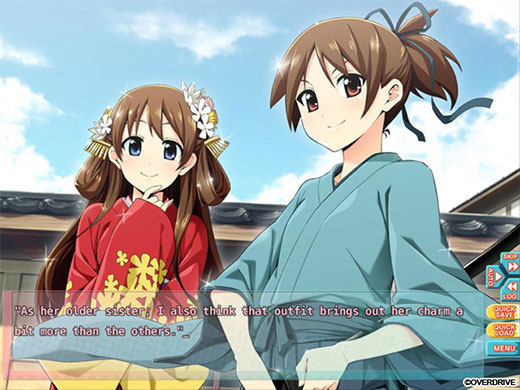 HIGH Some of the travel and destination advice is pretty handy.

LOW The game only very lightly touches upon its intended ambitions.

WTF How this criminally-thick main character can survive on his own is beyond me.

For anyone interested in heading there, Go! Go! Nippon! aims to be a virtual Japanese vacation, mixing sightseeing destinations with historical facts in the form of a Visual Novel.

In this title, the protagonist heads off to meet up with two online male friends who, as fate would have it, are not really male. They're revealed to be two sisters with gender-neutral names who just happen to live in the same house where the player will be staying, and their parents are currently out of the country.

Zut alors! What a pickle!

The game develops from there with the sisters—a mature, friendly type and a bratty tsundere younger one—offering to show the player around Tokyo (and later, a quick trip to Kyoto).

Depending on which destination is chosen from the list, one of them will take the lead and scurry off to explain the area in more detail, pointing out hotspots, points of interest and making general chitchat as they go. Oh, and she'll also fall eternally in love with the lead character, of course.

Go! Go! Nippon! offers a few neat touches such as dialogue being delivered in both English and Japanese via separate boxes, so anyone studying the language can test their understanding simply by reading the Japanese version (chock full of kanji) right alongside it.

There’s also a weird exchange rate option that pops up when the game begins to explain how much it would cost in real life to do the things in the narrative. It’s an interesting idea, but the likelihood of replicating the events in the game without having to expend money on things like hotel rooms or unexpected video game purchases is pretty slim, so its usefulness in a real-world setting is questionable.

The quality of the writing is decent, with near-perfect grammar throughout. However, some of the antics that the characters get up to will undoubtedly make some players cringe, such as when el protagonisto practically has a mental breakdown when missing a train, only to gush about how awesome it is when another one appears a few minutes later. Sadly, there's no option to sling the gibbering tool in front of one.

Tucked between his outbursts is some practical holiday information for players to learn, like grabbing hold of a Suica card for quick and easy access to train routes. Swipe at entry, swipe at exit, and PING! The money’s automatically deducted without having to calculate rates. Sweet.

Interestingly, some of the experiences the player will have wandering around virtual Tokyo were surprisingly close to my own. For instance, whilst in Akihabara, the protagonist accidentally wanders into a store full of pornographic doujinsh—something I also did whilst touring around the area a few years ago. It’s almost unavoidable given the sheer number of them. Disappointingly, the game doesn’t chronicle the part where he accidentally buys everything in sight and then accidentally brings it all home with him, so it’s not quite as true to life as it thinks it is.

It’s also depressing that the protagonist is such a dribbling imbecile throughout, frequently reacting to even the slightest discrepancies between cultures like he’s stumbled across a talking goldfish wearing a three-piece suit. He’s unrealistically naive, and it’s tough to take his antics seriously as a result, the unpardonable bastard.

On the whole, Go! Go! Nippon! Is hellishly difficult to rate, as I don’t have a clue who it’s actually aimed at. The protagonist is male and clearly interested in women, so it’s probably not aimed at female players. The educational content and suggestions for places to visit in Japan are fine, but there’s way too few of them for someone needing a comprehensive guide. The dating element comes streaking out of the blue with no logical progression towards its conclusion, so that’s out too. Hell, even serial masturbators will be left in the cold as there are only two brief, unnecessary bouts of undressing thrown in to keep them happy.

In light of this mish-mash, I guess the target player is anyone who wants a title offering a bit of Japanese trivia while also serving up two Japanese sisters undressing, a shallow romance, and roleplaying as someone so thick that he finds the concept of an outdoor vending machine to be a world-shattering experience. If this describes you, you’re in luck! For everyone else, Go! Go! Nippon doesn’t go far enough in any one direction to be recommended as anything more than a pleasant diversion for a few hours. Rating: 5 out of 10


Disclosures: This game was obtained via paid download and reviewed on the PC. Approximately 4 hours of play was devoted to single-player modes (completed 2 times) and there are no multiplayer modes.

Parents: According to the ESRB, this game contains absolutely nothing as it doesn't seen to have been rated. It's light and fluffy stuff throughout, aside from some pretty softcore privacy invasion intended as comic relief.

Deaf & Hard of Hearing: Everything of note is written in both English and Japanese. There's no concern here.

I think playing these games gets you on a watch list or something.