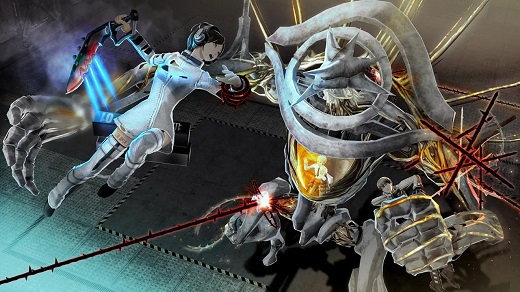 HIGH Taking down an Abductor, seizing the citizen within and sprinting to a safe zone as gunshots and explosions rain down all around.

LOW The downtime between missions is handled terribly with tons of lifeless text and loading screens.

WTF Hearing 'Hey! Hand back my robot waifu!' during a heated multiplayer session was kinda surprising…

Freedom Wars boasts a pretty cool setting—in a futuristic world where resources are limited and everyone lives in huge bunkers known as Panopticons, the mere act of existing is considered a crime by the powers that be. Anyone who puts additional strain on this system by eating, breathing or taking up space is branded as a Sinner and dealt a ridiculously harsh sentence upon birth. As the game begins, the player's character manages to lose their memory (also a serious crime!) and is punished accordingly. Better start working off that sentence—a mere million years of enforced incarceration shouldn't take long to clear, right?

Since everyone's imprisoned for being alive instead of something nasty like sloshing a can of kerosene around the local orphanage, there's not much fear of being shanked in the showers whilst fending off amorous advances from soap-carrying deviants. This mentally frees everyone up to reduce their sentences via missions against rival Panopticons… when they're not being penalized with additional sentences for walking five yards without permission, that is. Freedoms have to be earned.

It's an interesting setup, though there's a lot of pointless, charmless banter to chew through before the storyline allows things to progress, and this chatter drags the pacing down to no end. It's a shame that the writers squander this interesting dystopian premise on dunces running their mouths endlessly, but hey—it's out on the battlefield where Freedom Wars shines.

Surprisingly, it's not just another Monster Hunter clone, as may be initially suspected—it also takes cues from multiplayer shooters to offer a surprisingly varied amount of mission types. While missions against huge beasts are the usual order of the day, there are also control point captures, deathmatches against other Sinners, infiltrations, capture the flag variants and a few others for good measure. Oh, and a few rubbish stealth segments.

The controls can be tough to start with, but before long swapping between melee and ranged weapons becomes a breeze. Using a grappling hook weapon known as the Thorn becomes easy too—this neat addition can tie up the giant beasts or pull Sinners around the battlefield at speed for a tactical edge over their adversaries. 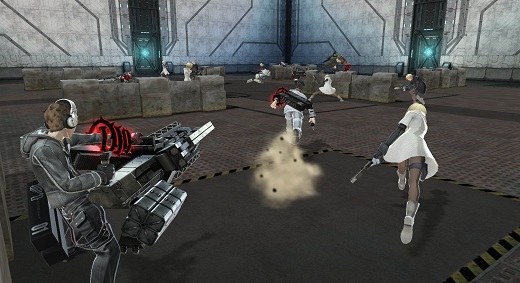 While the mechanics click into place, one area where Freedom Wars could use a bit of work is that it sometimes does a poor job of providing info, whether on how to play the game effectively, or how to take advantage of its various systems to improve the main character. For example, one later mission involves destroying a couple of key enemies. Killing these two would be no problem, so why it neglects to mention the player needs to survive fifteen waves of damage sponges before the targets appear is anyone's guess—I've timed out after several 45 minute missions because the game didn't give me useful details beforehand.

The other irritating thing is that AI teammates are often unpredictable. While the AI is decent at getting the job done, it's times when they wind up doing something dumb at critical moments which stand out the most—things like finding out that the members of my squad are halfway across the map when I need backup, or when they watch a team member die at their feet without bothering to revive them.

Oh, and while I'm on the subject of criticism, special mention must go out to the weapon upgrade system—it flat out sucks. Players can invest resources to create new weapons and items, but it's done by using a real-time waiting system inspired by mobile free-to-play, and the results are randomly generated. This isn't exactly an innovation that games have been screaming for.

Going online with Freedom Wars is a mixed bag. The cooperative missions are generally great, especially with a friend or two along for the ride. Versus operations often suffer badly however—it's awkward trying to target enemy Sinners with awful connections who teleport across the map, essentially invisible and getting kills whilst lagged. This wouldn't be such an issue if it was a few isolated cases here and there, but the majority of players I saw were phasing in and out of existence during over an hour of battle. The netcode just doesn't seem quite up to snuff for PvP, though the co-op works fine.

For all its flaws, I really enjoyed Freedom Wars. It offers a lot of variety, and handles most of the important aspects well—the shooting and melee are reasonably tight, the Thorn can be a blast to use, and it's great to hang off a colossal biomechanoid during intense firefights whilst sawing its legs off with a chainsaw jammed into its vulnerable bits. However, not every element of Freedom Wars was given an equal amount of care and attention. The lows may leave players shaking their heads in bemusement, but the highs can be genuinely thrilling. It may not be what it could have been, but there's still a lot to like underneath the awkward design blips. Rating: 7.5 out of 10


Disclosures: This game was obtained via retail store and reviewed on the Playstation Vita. Approximately 30 hours of play was devoted to single-player modes (completed 1 time) and 3 hours of play in multiplayer modes.

Parents: According to the ESRB, this game contains blood, mild suggestive themes and violence. I'd have no problem with my nonexistent kids playing through this. It's pretty sanitized, with cartoon levels of action and peril throughout.

Deaf & Hard of Hearing: All dialogue is spoken in Japanese and subtitled, both inside the prison and out during battle. No real issues, other than some potential warning cues being missed out on.

Hey Ticktock! We’re in agreement, for sure. Most of those issues are things I’d considered pointing out in the review, but got edited along the way. Not so much the ‘knockdown’ aspect of combat though, although that could really come to play in PVP. With teleporting players I barely even knew what killed me most of the time, so I haven’t stuck at it. My complaints with the last boss isn’t so much its difficulty – compounded by it being the only place where I really felt that getting knocked down meant you weren’t going to get back up –… Read more »

Totally agree with this review. In addition to the stuff you mentioned i have to say that the soundtrack kicks ass. Maybe not as much listening to it on its own, but when the action gets hot i feel it really adds to the game. I’d go even harsher than you in criticizing the story though. They never go into any detail about the society the characters are living in (apart from some superficial nods), everyone accepts it. I thought they were going the route of fight the powa! but in the end apparently everyone is content with robbing other… Read more »