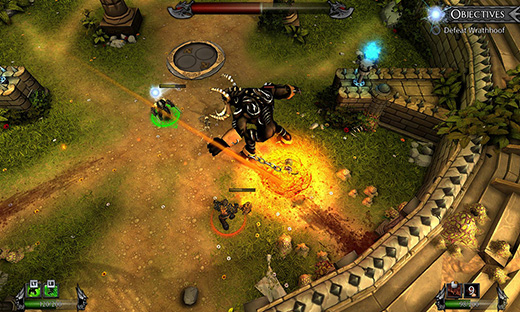 HIGH Clearing a difficult arena within a hair's breadth of bloody failure.

LOW No mid-mission checkpoints can lead to some mindless repetition.

WTF I'm unsure whether Balfus is supposed to be comic relief or not. He's so deliciously deadpan!

It’s not easy to tell what type of game Forced is at first.

A quick glance would convey a Diabloesque experience, perhaps, except all the stages are enclosed and there’s no loot or experience progression system. It also kind of looks like a MOBA, but… well, there’s no player versus player modes anywhere to be found. So then, it’s a little like Gauntlet? Maybe? In truth, the closest I could come to a description is: “a solo or co-op puzzle game packed to the gunnels with enemies to murder along the way.” Even that basic description is a little off base though, as Forced does an excellent job of switching things up throughout.

Players are dropped into a number of arenas throughout the game’s campaign, constantly assailed by murderous vermin and tasked with leaving said dungeons with all their bits and pieces intact. Smacking these enemies repeatedly builds up ‘marks’ which can be used as a sort of enhancer for equipped skills —enemies’ll take more damage from a powerful smash, for example, or be more susceptible to certain types of attack.

Some stages are as simple as getting from point A to point B before being choked to death by poison gas, others involve flipping switches to open paths whilst simultaneously being attacked by Minotaurs. Boss battles pop up from time to time, and most of the game’s systems are all held together by a glowing, player-controlled orb called Balfus who both dispenses advice and allows for the manipulation of objects along the way.

Balfus can be called to either follow the player or to stay put. If he comes into contact with certain environmental elements, he can acquire their abilities, activate them, or wipe them clean out of existence. Using Balfus to interact with objects isn’t always for the best, though. If Balfus becomes charged with an explosive element, he’ll clear away blocking objects—but he may also blow unwary players into bloody little chunks if he gets too close. Managing this orb is a game changer, and Balfus’s role is intelligently utilized to keep things fresh throughout. Whether he’s providing light in the darkness, a safe haven from outside aggressors, emitting a gentle healing spray or simply being abused by bosses and suddenly trying to detonate our heroes, he invariably mixes things up in a variety of ways.

Speaking of mixing things up, Forced comes into its own when played in multiplayer—at least with friends. Make no mistake, it would be borderline impossible to play through Forced’s co-op campaign with a single-player mentality, as it encourages intricate teamwork far beyond the usual tropes, and communication is essential while playing, especially when it comes to using Balfus because two players attempting to control it at once can cause extreme chaos.

For example, one person might desperately need healing from a shrine, while another is in the perfect place to solve one of the puzzles while also being chased by a crapload of monsters. In both cases time is of the essence, yet there’s only one of the floating spheres to go around. Without appropriate levels of communication and trust, a tug of war will ensue, likely leaving both players as dead as a mutilated doornail with its insides flopping out. Forced doesn’t mess around either—players can die very, very fast when things go south, and the level of challenge can be both rewarding and infuriating.

While it’s a great feeling to finally polish off a difficult section and move on, it can be utterly aggravating to miscalculate Balfus’s flight path and watch him drift within an atomic particle of his intended target, only to miss and fail the objective. This usually happens near the end of trials where the difficulty kicks into high gear, and there aren’t any checkpoints to be found. Stages tend to be brief, but enforced repetition can become tiresome in a hurry.

Potential frustration aside, I enjoyed my time with Forced, and there’s nothing else quite like it on the market. Slightly tighter mechanics and a more solid feel to the combat would have been nice, but as a whole it definitely comes recommended —just be ready for the air to turn blue from time to time when it comes to multiplayer. Rating: 7.5 out of 10


Disclosures: This game was obtained via publisher and reviewed on the PC. Approximately 3 hours of play was devoted to single-player modes and 10 hours of play in multiplayer modes, and the game was completed.

Parents: According to the ESRB, this game doesn't exist, the slackers. Forced does contain a certain amount of blood and some nasty looking torture devices, but the semi-cartoony visuals dull the violence quite a bit. Teens should be fine, younger players should avoid.

Deaf & Hard of Hearing: The majority of Forced's puzzles are of a visual nature, and subtitles are readily available. Certain audio cues are helpful, but not entirely necessary.