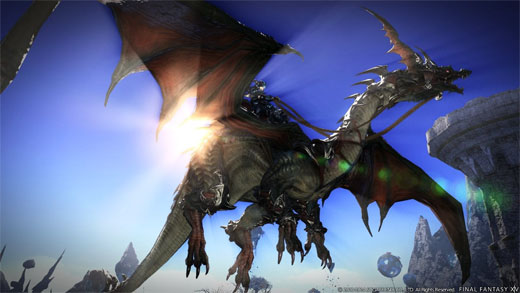 LOW Hitting level-locked story beats and having to grind for hours to continue with the game.

WTF The writing in an online MMO is significantly more accomplished than in the entire FFXIII series.

It's been a while since I last subscribed to Final Fantasy XIV: A Realm Reborn.

I enjoyed what I played at the time, and was impressed by the exquisite soundtrack, the broad scope of the game design, the incredible translation (it puts most Final Fantasy titles to absolute black burning shame!) and other aspects that set the baseline for what turned out to be a highly enjoyable MMORPG experience.

It had flaws, of course. Things like finding the user interface quite awkward grated on me, but the main issue was that once the story content was done, I didn't feel compelled to rerun dungeons or grind out the weapon relics for my character's job classes. I enjoyed my time with it, a good eighty hours or so, and then moved on when it threatened to become a thankless cycle of repetition and regurgitated content.

Now the first real expansion, Heavensward, is here with three new classes and numerous new areas to explore. Is it worth it? Absolutely, though whether it's worth staying subscribed beyond the core campaign remains in doubt.

The story picks up after the end of the expanded storyline patch content from the vanilla version of A Realm Reborn. Unexpectedly, it forces new or returning players to get through the old storyline (a substantial chunk of content!) in order to access the new stuff.

Once that's done, Heavensward involves fleeing from the old play areas, all the way to Ishgaard. Ishgaard is an area only hinted at in the base game, and it's apparently a place where knights are continually locked into a struggle against a horde of dragons that stand a pretty good chance of scrubbing them off the face of the planet. Who better to sort out their issues than the Warrior of Light?

Yes, everyone playing the game is the Warrior of Light upon whom all hope rests. There's loads of the buggers shuffling around, but it still manages to remain interesting and personal because the translation remains more than up to snuff thanks to plenty of salty language, groanworthy puns and a surprising amount of gravitas written into nearly every character. (It's a shame Final Fantasy XIII's semi-intelligible garbagespeak and copious psychobabble couldn't have been handled by the Reborn team. It might have been tolerable if it had!)

Gameplay in Heavensward is standard MMO fare. There are a bunch of classes readily available, three of which are new to this expansion: the insanely popular Dark Knight tanking class, the significantly less popular DPS-oriented Machinist class, and a new healing class of Astrologists. The correct mix of these will easily descend into a dungeon to destroy trash mobs and bosses for great justice.

Beyond the new classes, fully outlining everything available would take longer than this review has the scope for, but there are a ton of things for players to chew through. For example, players can now fly in Heavensward—not on their own, but by obtaining new types of chocobos and attuning themselves to Aether currents in each area. There's also an auction house that I became mildly obsessed with, making 5 million gil in less than a week on a server with a poor economy. Of course there are plenty of other things to do, such as crafting and hunting tasks for players to complete if so desired.

For fans of MMOs this is all good stuff, if perhaps a little too boilerplate and grindy for some (like me) to fully invest in. I mean, I definitely enjoy the base mechanics, but I still managed to fall asleep during some runs as both DPS (Ninja) and Tank (Warrior) classes because it was all so overwhelmingly familiar and took little effort to succeed.

While a person's mileage with Heavensward will vary depending on how much they enjoy the MMO genre, one thing I found absolutely unacceptable is the game's customer service.

After having some issues and going to them for assistance, the reps acted like petulant, argumentative children in their efforts to prove why I was both wrong and an absolute bastard for seeking help in a minor matter. They twisted facts, intentionally misunderstood questions, and squirmed away from responsibility on their end, eventually cutting off communication after we came to an inadequate conclusion. They lied when all the evidence pointed to the contrary, and going by various reports online, they have a record of doing the same to other players.

Despite my bitter experience with the game's abhorrent customer service, there's still a lot to love in Final Fantasty XIV: Heavensward. The music is often phenomenal, the translation and dialogue are exquisite, and the world is one that's worth spending time in. However, it's all based on grind-heavy gameplay, and it's still subscription based. My advice is to buy it, burn through the new content, and then put it aside until the next substantial expansion is released. 7.5 out of 10


Disclosures: This game was obtained via paid digital download and reviewed on the PC. Approximately 80 hours of play was devoted to multiplayer modes, and there is no offline option available.

Parents: According to the ESRB, this game contains: blood, language, sexual themes, use of alcohol and violence. The visual representation of such things are usually quite mild, the textual accompaniments can be quite graphic. Did I mention that the translation's great?

Deaf & Hard of Hearing: It's likely that without audio input certain enemy phases, attacks or patterns may be a little harder to see coming or adapt to, and entire parties depend on quick responses to threats. That said, there's a lot of visual information including line of sight, threat meters and casting bars to help players out—the amount of which is quite commendable.