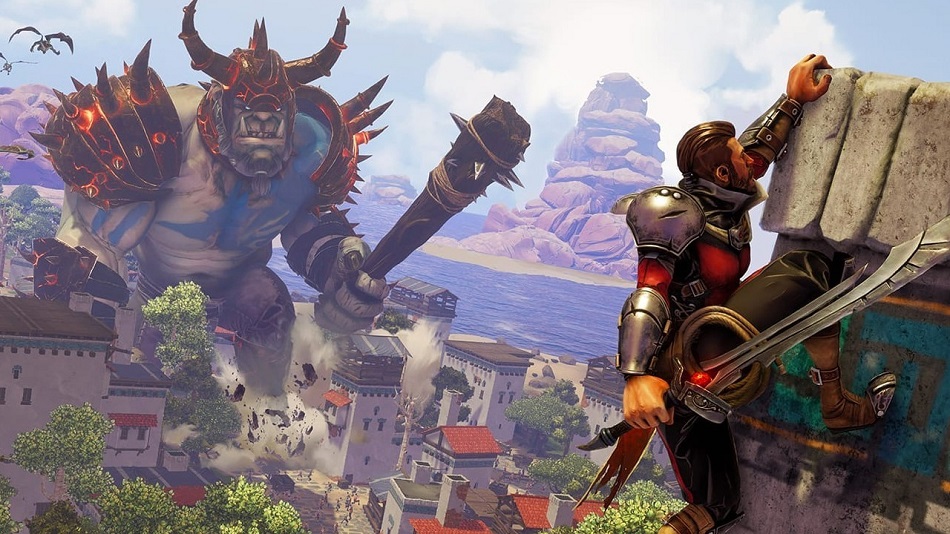 HIGH The first time decapitating a Ravenii’s neat, I guess.

LOW Anything requiring any sort of precision movement.

WTF What part of this game remotely suggests that it’s worth sixty dollars?

Extinction revolves around the concept of hundred-foot-tall ogres known as Ravenii waging a war on humanity, smashing into their cities and killing everything in sight. They can’t be defeated via conventional methods due to regenerative powers that can heal anything from puncture wounds to missing limbs. As a result, normal people can’t really resist, so it’s up to highly skilled and agile warriors to take the fight to them, clambering up their massive bodies before delivering a lethal blow to the backs of their necks.

Attack on Titan fans, stop me if this sounds familiar.

While Extinction doesn’t feature squadrons of squishy little humans using omni-directional mobility gear to catapult themselves around the city, instead we have a single warrior who can run up buildings and enemies alike, bounce off canopies, grapple around the place and soar through the air in a controlled glide. It’s a promising setup, despite its highly derivative nature. The only problem is… well, it’s not very good. In fact, it’s one of the worst games I’ve played in years.

The storyline, which has precious few cutscenes and is delivered mainly through in mission dialogue, stars Avil and Xandra – two former slaves who are the only pair still able to put up a fight against the Ravenii. Avil’s the player character with the muscle, Xandra devises schemes offscreen and… that’s it, pretty much. Everyone else is utterly inconsequential to the proceedings.

The core gameplay loop in Extinction involves either rescuing braindead civilians huddling around teleportation stones, killing small fry enemies, or lopping off Ravenii limbs to power up Avil’s sword with rune energy before hopping up onto their necks and decapitating the buggers – at which point all the stored rune energy is spent and Avil has to go charge it back up again before he’s able to kill another giant.

None of these actions are satisfying in the least. Civilians are insufferably dim-witted and can’t fight back, so it’s a case of running over to their teleporters and activating them before nearby enemies kill them. It would be far easier than it is if there was anything resembling a halfway competent map to aid Avil’s navigation around each area. 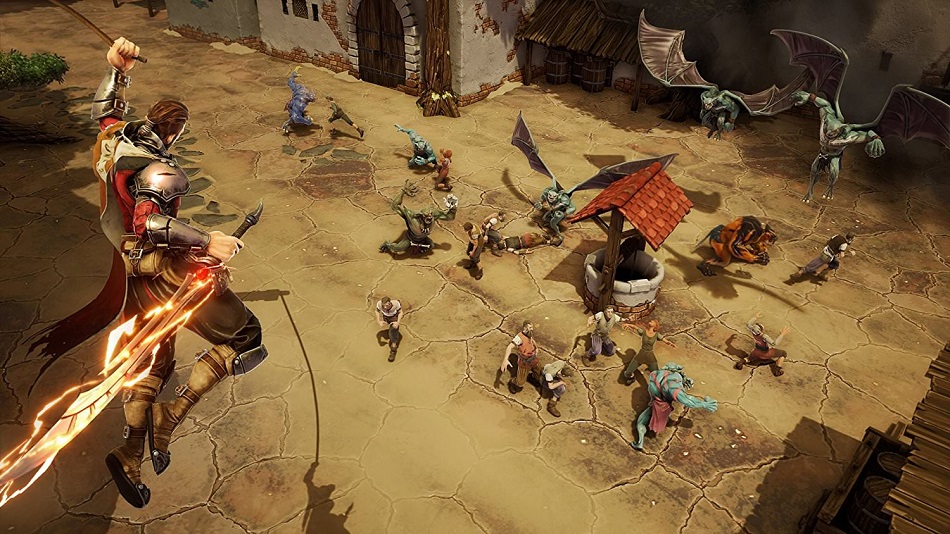 Smaller enemies, known as Jackals, are meaningless – they’re little more than damage sponges, and showcase just how tedious and ill-conceived the standard combat is. Players have a number of combos accessible through the single attack button via holding or delaying inputs, but it takes far too long to kill even the weakest enemies. However, the same strike that takes care of the Ravenii usually kills these peons in one or two hits anyway, utterly negating the need for the combos in the first place, and on anything other than a giant-sized deathblow, the move can be used with impunity.

There are a ton of problems related to basic things like movement, as well. Avil often feels like he’s skating instead of running, leading to a lack of precision while maneuvering. He’ll get stuck on tiny rocks, stop dead on minor geometry, or pointlessly pause whilst scooting up a wall or Ravenii. He also has a grappling hook to aid him in scaling enemies or vaulting across the city, but it’s insanely finicky to use and will happily lock on to grapple points in the opposite direction from where he’s facing, slinging him completely the wrong way at high speeds.

The camera is just as poor. When it’s not getting stuck inside an ogre’s armpit as Avil tries to scale one, or refusing to swing far enough above or below him during a rune strike to land it on a weak point,  it’s failing to convey vital information about each battle at the worst possible times. The Ravenii continually attack from offscreen due to their massive size, which leads to often getting hit and instantly killed by attacks that players won’t even see coming, and the unreliable hitboxes on these attacks exacerbate matters.

Not that any of this matters though, as Avil also happens to be immortal for some reason. No matter how he dies, he’ll respawn and have to hoof it back to wherever the action was. This is about as enjoyable as it sounds when the target is on the other side of the city from the nearest spawn point, of course.

The amazing thing, however, is just how unrelentingly repetitive Extinction is. Sometimes Avil may be given random tasks, but they’re all generally either save X amount of civilians or prevent X amount of watchtowers from being destroyed, along with arbitrary time limits and the like. Ravenii can also show up wearing different types of armor protecting their weak points, but they’re just gimmicks that delay cutting off their limbs and heads – the gameplay loop on both counts is the same, and players will never need to change up their approaches or attack patterns in any appreciable way.

I wish I could think of one single thing that Extinction has going for it, but I’m coming up blank — not only does it bungle its core gameplay mechanics, it then repeats the same circus sideshow way, way beyond the threshold of any sane person’s breaking point. It also managed to crash to the dashboard of my PS4 multiple times, so the fact that it’s unstable is just the icing on a truly putrid cake.

Even if Extinction had released as a ten or fifteen dollar digital download, I still wouldn’t recommend it to anyone – life’s too short and filled with genuinely great games to waste on terrible experiences like this one. Given that it released at full price, however, it almost feels like a deliberate and calculated insult towards any game that ever earned its price tag. It is an aggressively terrible game that should be avoided at all costs. Rating: 1.5 out of 10

Disclosures: This game is developed by Iron Galaxy and published by Modus Games. It is currently available on PS4, Xbox One and PC. This copy of the game was obtained via publisher and reviewed on the PS4. Approximately 10 hours of play were devoted to the single-player mode, and the game was completed. There are no multiplayer modes, though there are online leaderboards.

Parents: According to the ESRB, this game is rated Mature and contains Blood and Gore and Violence.

Deaf & Hard of Hearing Gamers: It’s largely playable without sound – subtitles are available, and there are some onscreen prompts such as a ‘spider sense’ style indicator to warn of incoming attacks. Id say it’s fully accessible.