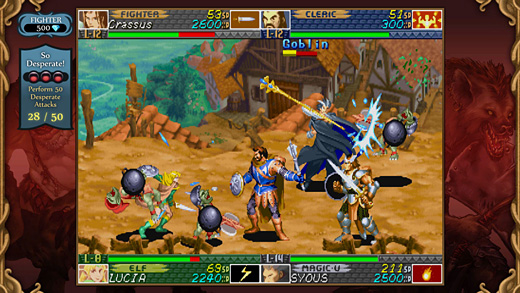 WTF The Gnome village is optional?

is a compilation of two old-school brawlers: the original Tower of Doom and its greatly-improved sequel, Shadows over Mystara. Neither was ever available on a home console outside of Japan, so for anyone who missed them in the arcade through silly little mis-steps such as not being born quickly enough—well, now's the chance!

This release is a nice little package which has obviously been created with love and care throughout development. There's a wide range of options and filters, though the smoothing options seem scientifically designed to remove all charm with surgical precision. With the scan lines and great big shonking pixels enabled, though, it looks great for a classic title. It can also be viewed and played with the "arcade cabinet" visible as in previous conversions such as Final Fight.

So how do the games hold up? Pretty well, actually.

My memories of Tower of Doom in the arcade are fuzzy at this point, largely consisting of squandering my life savings after deciding to tackle the Red Dragon rather than doing the sensible thing and circumventing the bugger through a valley of heavily armed bandits, but it's still decent for something that originally came out in 1993. The animation's a little lacking and enemy types are more limited than would be ideal, but there are neat little features such as an open-ended choice system that allows players to choose their own path through the adventure, or equipment that boosts stats… until it breaks ten seconds later.

Shadow over Mystara improves on the original in a lot of ways—more characters, more weapons, a wider array of special attacks and a whole bunch of other tweaks all over the place.

Subweapons such as hammers and throwing daggers lie scattered around the world tucked away in chests, and can then be presented to an enemy's face when the need arises. Gold and various potions provide stat boosts and the ability to purchase items from shops, and there are even special named items which will increase base attributes until they're (again) destroyed in combat moments later. There's even an experience system to power up players as they progress through the world, but given that each playthrough often lasts around half an hour, this is more a tribute to the source material than anything resembling an integral gameplay mechanic.

Brilliantly, there's also a "House Rules" format that can be unlocked through spending the riches unearthed during play. Don't like the fact that pilfered equipment breaks through use? Change it! Wish characters stole health from enemies with every attack? Implement it! While the options aren't anywhere near limitless, it does allow for some variety—it's basically a cheat mode, but it’s great to play around with.

Multiplayer is well-done, with four player co-op available on- and off-line. Sessions tend to be smooth with little evidence of lag, but it's tough to imagine the servers overflowing with available companions. Much as in real life, a party of local chums is undoubtedly the preferable way to venture out into the unknown, though.

All this aside, these titles do have a tendency to become repetitive over time, and the unlimited continues available kick the challenge out of the experience by encouraging a head-on grind through enemy hordes rather than a more skilful approach.

Controls are also a little unintuitive. For example, the way to block in most situations is to hold down the attack button and move backwards. To pick up items and gold quickly, it's a quarter circle roll of the joystick and a stab of the jump button. While these commands were likely innovative workarounds when applied to an arcade unit with limited buttons available, it's clumsy compared to modern standards.

The Dungeons & Dragons titles were some of the most evolved side-scrolling fighters of their day, with design and gameplay concepts that made them stand out from their contemporaries. However, a $15 price-tag makes it tough to recommend the package to anyone who wasn't already a big fan back in the day. It's a beloved franchise to be sure, but one that's (understandably) showing its age at this point. It may be unlikely to wow newcomers, but for those with a spot of goblin-slaying nostalgia, it should certainly hit the right notes. Rating: 6.5 out of 10.


Disclosures: This game was obtained via publisher and reviewed on the Xbox 360. Approximately six hours of play was devoted to single-player modes (completed two times) and two hours of play in multiplayer modes.

Parents: According to the ESRB, this game contains violence, blood and suggestive themes. Suggestive themes probably refer to the Thief's aversion to sensible clothing.

Deaf & Hard of Hearing: Story beats are all text based, no potential problems to report. It's the kind of game designed to thrive in a noisy arcade environment.