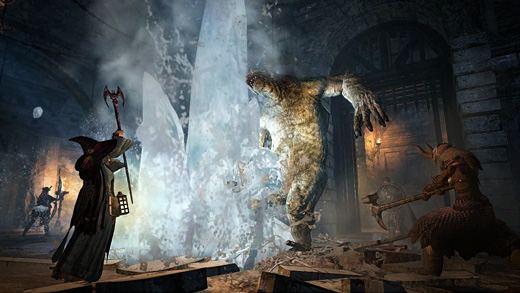 HIGH Bitterblack Isle is a great addition, dripping with atmosphere.

WTF WHAT THE F*** HAPPENED TO DANGAN?

isn't an all-new entry in Capcom's new fantasy action series, but an enhanced version of the original which shaves off a few rough edges from the previous release. There's now an option for Japanese audio, a high-res texture install pack is provided, and a chunk of previously released downloadable content (DLC) is included at no extra cost. The package has also been released at a budget price, and given that I burned more than 150 hours into the original, that's a whole lot of gaming for a comparatively low cost.

Capcom has also clearly listened to complaints that the original involved too much walking—though thankfully, there's none of that quick travel nonsense to utterly nullify any point in having such a beautifully realized overworld. Simply put, time-saving Ferrystones are significantly cheaper than they've been in the past, allowing expedited travel back to the central hub of Gran Soren at almost any time. It's not as interesting as a panicked flight through darkness with skeletons nipping the Arisen's heels, but it does save some hassle in getting back and forth.

The real freshness in Dark Arisen doesn't come from simple tweaks to the base game however. There's a large new dungeon situated off the coast of Cassardis stuffed full of new enemies, items and bosses to discover.

Bitterblack Isle is a foreboding place. Failed Arisen litter the corridors like discarded condoms, still managing to curse their woeful fates aloud despite being on the deceased side. Pawns separated from their masters have gone stark raving mental and prowl the depths, attacking anything that moves. Best of all, enemies known as Corpse-Feeders have an insatiable urge to snack upon their fallen comrades—leave a mountain of corpses behind and these high-level creatures may warp in from nowhere and crash the party. Death himself has also come along for the ride, chasing players through the dungeon at random intervals and killing them off with a single swipe of his scythe. 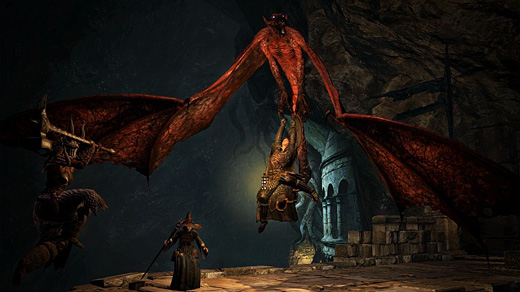 Naturally, it's barely worth the effort righting the wrongs of the world if it doesn't result in tangible benefits, so it's a good thing that Bitterblack is stuffed to the rafters with goodies to pilfer. Most of the choice stuff is cursed and requires the use of Rift Crystals to cleanse them for use. It's worth the financial outlay however, as these weapons and bits of armour are much stronger than anything in the original. With the help of a new non-player character (NPC) (also a fellow Arisen) all items can be further enhanced past their previous Dragonforged limits.

Despite the pre-release claims of Bitterblack taking around twenty hours to finish, I managed to rattle through it in six and a bit—though the fact that I imported saved characters at level two hundred no doubt put a dent in how long it took. Even so, it's not easy at that level and laden down with the best equipment. Then there's the fact that it has to be finished twice to grant access to the real final boss and the opportunity for a bunch of loot runs.

Technically, the game continues to struggle a bit, with enemies and NPC's occasionally not loading in as quickly as the player can reach their location. The black borders at the top and bottom of the screen continue to intrude on the action (not a huge deal, but occasionally irritating) and it's the kind of thing that's just begging for a release on the PC.

The story can also be a little weird from time to time—one seemingly important sidequest involving the Duke's wife is immediately forgotten about by all involved, for example. The Warrior class also remains damn-near useless, which is a bit of a shame for anyone who loves swinging giant hammers around like any normal person, and whoever decided that replacing the original intro song was preferable to re-licensing it should be chucked in the back of a van, taken out to sea and keelhauled for their crimes against humanity whilst being stung by bees. Many, many bees.

Aside from that though, the original Dragon's Dogma was one of the better role-playing games to come along in quite some time when it originally debuted last year. Dragon's Dogma: Dark Arisen

is the very same game, only better, stuffed with even more content, and cheaper to boot. Now's a perfect time to dive in for new players, and those who've beaten it already will find a nice new challenge in Bitterblack Isle alongside some additional goodies for carrying over their save as a loyalty bonus. It's a game that keeps on giving, only with a bit less Dangan. Rating: 9.0 out of 10.


Disclosures: This game was obtained via retail store and reviewed on the Xbox 360. Approximately 30 hours of play were devoted to the single-player mode, 150+ on the original version, and the game was completed many, many times. There are no multiplayer modes.

Parents: According to the ESRB, this game contains blood and gore, partial nudity, suggestive themes and violence. The Arisen will also be the recipient of unexpected advances from unexpected characters with no option to fend them off. How utterly immoral!

Deaf & Hard of Hearing: Subtitles are available during cut-scenes, gameplay and also for what pawns want to bring to the player's attention.

I’ve got to respectfully disagree on the title music. The old intro tune was so cringe-inducingly bad I’d be hammering the start button to get into the game before the vocals started.

Great review of a great game, but I agree with kurtrusselfanclub. That old intro was wrist-cutting inducing garbage,while the new intro music reflects the game’s tone accurately.

Y’know, when I take over the world you guys are going straight into the chamber of bees. Bzz! Bzz! Heh heh heh – seriously though, I know that Dogma’s original menu music was bound to be divisive. For me however it was a great big middle finger to all the focus testing that tends to dominate the industry these days, and I appreciated the punk spirit behind the gesture. Also, I happen to genuinely like the tune which probably helps quite a bit. Maybe I’m just an ancient, out of touch wreck hauling my outdated carcass slowly towards the grave,… Read more »