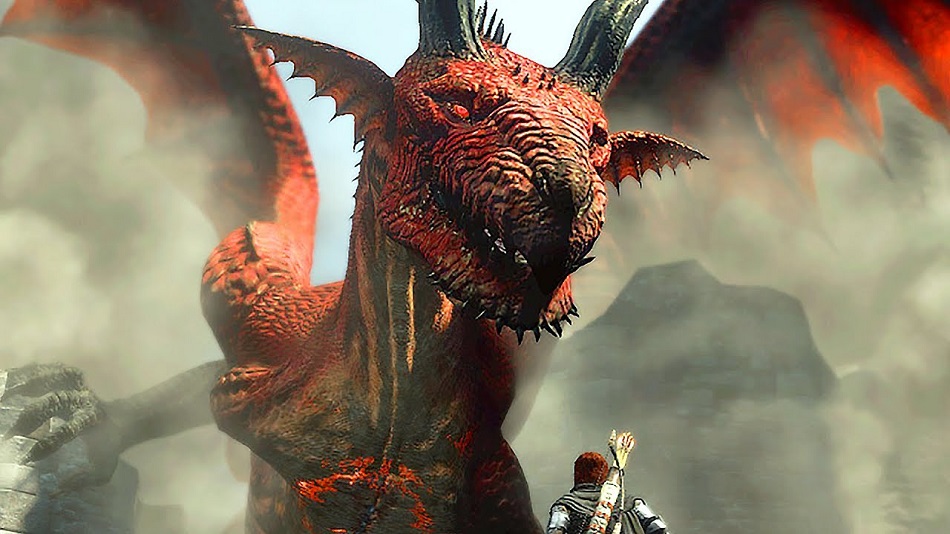 HIGH The absolutely exquisite melding of combat and exploration.

WTF So hey, looks like I was the first person in the world to get the Platinum trophy. Neat!

It’s been a while since Dragon’s Dogma was originally released on the Playstation 3 and Xbox 360. At the time I remember being blown away by its incredibly fresh approach to combat, putting in more than a hundred hours during the week after its release. However, it struggled to deliver its true vision on a technical level, running at a shaky sub-thirty frames per second even with massive borders obscuring half the screen.

An excellent PC version was released last year that destroyed these original limitations, and now Playstation 4 and Xbox One owners are lucky enough to get a second shot at what I personally consider to be one of the absolute finest action RPG experiences ever released, and one that shines every bit as as brightly today as it did back then.

After going through a fairly extensive character creator, players will be treated to an introductory scene where their village is attacked by a massive dragon which immediately starts barbecuing all their friends. After an amazingly unsuccessful attempt at fending it off goes sideways, they’ll wind up with their heart ripped out of their chest for their trouble.

That’s okay though! It turns out that the main character is a chosen one known as an Arisen, and this is what usually happens to them before they head off on a grand quest to slay said dragon, reclaim their heart, and save everyone from being turned to charcoal during its rampage. The Arisen is joined on this journey by up to three other comrades known as ‘pawns’, who appear to be mostly human but exist solely to serve the Arisen’s needs, and they can be swapped in and out at-will.

The pawns will aid in battle, offering  deep strategic insight such as how wolves tend to dislike being set ablaze and that being turned to stone kinda sucks. They also learn from their experiences – if an enemy is weak to ice, they’ll prioritize ice attacks after discovering how effective it is.

Occasionally they may do dumb things like cancelling spells as enemies draw near, but on the whole their aid can be invaluable in making up for the shortcomings of a player’s chosen class. A Sorcerer pawn might burn the feathers from a griffin’s wings, for example, causing it to crash into the earth where a Strider can then leap atop and start hacking away at its throat for colossal amounts of damage. 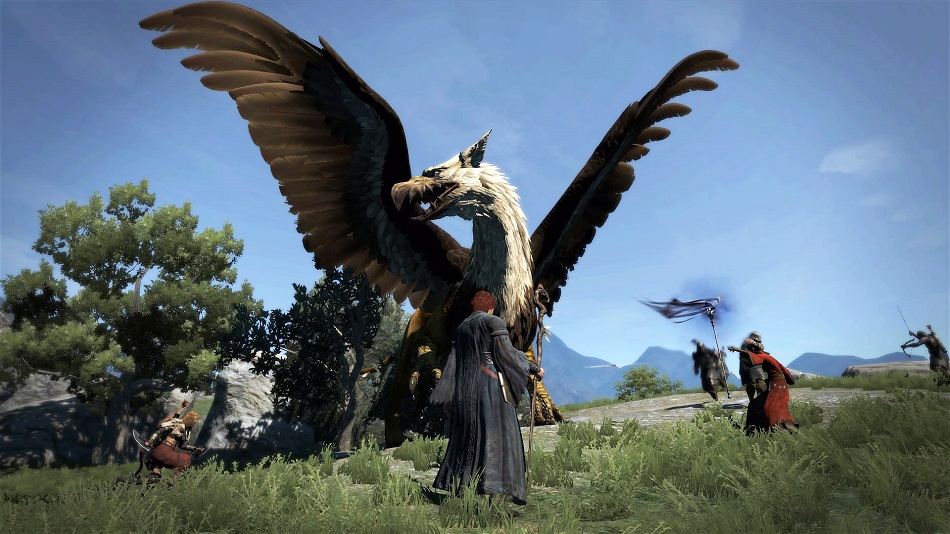 Once past the opening hijinks at the player’s village, it’s not long before the true strengths of Dragon’s Dogma become apparent.

First, the combat is leagues ahead of the average Action-RPG, offering a wide selection of upgradeable skills and character vocations, all delivered in responsive, real-time environments. My personal favorite is the Strider class, which pairs a bow for ranged combat and twin daggers to carve enemies into bits. Their skills include rapidly dashing through enemies while slicing, and snaring enemies with wires before hauling them in close, launching them into the air and chucking a fistful of explosive powder at them.

Where Striders really shine, however, is in clambering up the colossal beasts commonly encountered throughout the realm of Gransys. Every class can climb monsters, but Striders are especially nimble – scooting up a twenty foot tall cyclops to stab it in the eyeball while it’s swinging a club the size of a tree is one hell of a rush .

Other classes are a little more specialized. Fighters offer a balanced range of attack and defensive skills, and playing as a mage or sorcerer is slightly dull due to the lengthy casting times, so I handed that responsibility off to my pawn, and it worked out well indeed. It’s always gratifying to be fighting for dear life before having everything in a five-hundred yard radius get blown to hell,  leveling all nearby enemies into piles of crispy corpses. There’s a playstyle available for every preference, and multiple difficulty settings to suit every taste.

The expansive world of Gransys is another fantastic selling point for Dragon’s Dogma. It’s a huge land to explore, yet areas rarely ever feel like they’re just filling up space for the sake of it. Every region and dungeon feels carefully handcrafted, and there are an abundance of secrets to be discovered within distant windswept castles and dingy, dripping caves.

The one place Dogma slips up (slightly) is in its roots as a story-driven RPG. The writing is fairly terrible for the most part, with an Olde English-style script that’s easy to mock and more or less devoid of humour. Anyone expecting writing on the level of something like Divinity: Original Sin 2 won’t find it here. However, while it’s an undeniable weakness in the overall package, it’s also quite easily ignored. Oh, one other issue is that some sidequests are time-limited with little warning as to when they’ll become inaccessible – with only one persistent save available, it’s not always possible to go roll back to an appropriate save.

Dragon’s Dogma isn’t just a fantastic time, full of superb adventuring and uncharacteristically accomplished combat. It’s also one that’s stood up incredibly well over the years, feeling every bit as fresh and unique as when it debuted in the previous generation. It really says something that after hundreds of hours and dozens of completions later, I was more than willing to drop everything and get stuck back in to this remaster. It may have aged a little visually, but its combat and reward-heavy exploration have proven themselves evergreen, standing out from the competition even now. Rating: 9.5 out of 10

Disclosures: This game is developed by and published by Capcom. It is currently available on Playstation 4, Xbox One and PC. This copy of the game was obtained via publisher and reviewed on the PS4. Approximately 50 hours of play were devoted to the single-player mode, and the game was completed multiple times. There are no standard multiplayer modes, though pawns can be hired and rented out to other players online for rewards.

Parents: According to the ESRB, this game is rated Mature and contains Blood and Gore, Partial Nudity, Suggestive Themes and Violence. While I don’t feel it’s particularly excessive, there are enemies in Bitterblack that get pulped when they die, and the game does kinda start with the player’s heart getting torn out of them. It’s not particularly graphic, but there is a lot of death, corpses and moldering bones lying around.

Deaf & Hard of Hearing Gamers: There are an absolute ton of subtitles available for almost every occasion, from pawn chatter to cutscenes. While some sneak attacks may come without warning, the game is entirely playable without sound.

I bought this game on 360 and tried to get into it so many times, but the terrible dialog and story was really a deal breaker. I found it impossible to get invested in the game, and kept putting it down. The early going is just a slog of utter blandness. What am I missing here? Where is the love coming from?

Hey Lambonius! Well, a large part of it depends on what you’re coming to the game for. If it’s for an involving and engaging story, like you mentioned, then you won’t find much of interest here. It does perk up towards the end in a somewhat ludicrous way, and Bitterblack Isle has an incredible atmosphere that’s unlike anywhere else in the game, but the dialogue and writing otherwise remain fairly consistent throughout. Consistently bad, that is. As to its merits as an adventure though, that’s a whole different ball game. The combat is fast and engaging (especially as players progress… Read more »

Hey, thanks for the thoughtful response! I may give it another go the next time the PS4 version ends up on sale. When I played it on 360, I did so without an Xbox Live subscription, so I’m sure I missed out on a good portion of what made the pawn system fun.

Heh, yep. I was off work at the time,, so it happened to land when I could seriously plow some hours into it.

Didn’t exactly get a great deal of sleep that week, to be fair.

Would you say it’s a better action rpg than… Dare I say it – Dark Souls? Yeah, I went there.

Hey hey! Woo, that’s a nasty one. I absolutely loved the original Demon’s and Dark Souls, but eventually slipped away from them as the series went on. I only ran through Dark Souls 2 twice in several years, and quit halfway through the third, so there’s a certain amount of sequel fatigue attached to the series for me now – even though I completed the first few (and Bloodborne) way more than is remotely healthy. They’re tough to compare given how they both take completely different approaches to combat, but Dogma certainly hasn’t grown stale for me yet. Given the… Read more »

Just clicked the buy button. Thanks! Souls didn’t have much of a story either, but if it did, I didn’t care. I liked the combat, world, and items. Plus, the price is right. 30 bucks? Cost of a movie with the wife these days… Sorry honey, we will see The Mountain Between Us some other time….

Heh, now I’m going to feel responsible if you don’t get on with it. That said, if you end up liking the game even half as much as I do you’ll absolutely love it.

If you’re finding the early going tough or just fancy a leg up, feel free to hire my pawn – her name’s ‘Danger’, Strider class. She’ll wreck things pretty well for ya!