Come For The Puff-Puff… 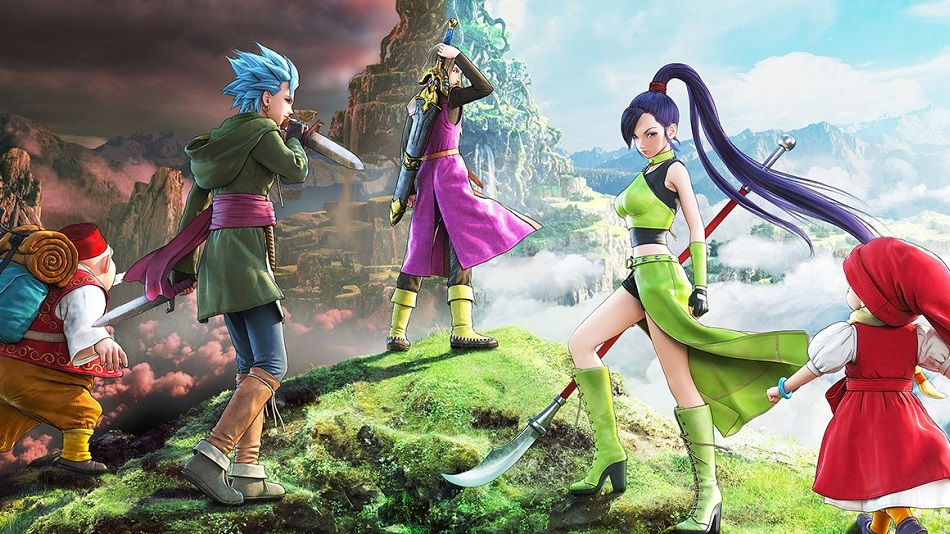 LOW The linear approach to discovering and making progress throughout the world.

Here’s an interesting bit of trivia: Dragon Quest XI has absolutely nothing to do with the quest of a dragon. False advertising! No, the protagonist happens to be the possible reincarnation of an ancient hero known as the Luminary, blessed with a magical sign on his hand that can channel the power of lightning. Soon after his coming of age trial he sets off on a quest to present himself before the king of the realm. Things don’t go according to plan, though, and before long he’ll be partying up with complete strangers and traversing dangerous dungeons in a desperate bid to survive.

Thus begins the game proper, a beautiful and sprawling traditional JRPG adventure that spans up to a hundred hours to complete in its entirety. Many of the classical Dragon Quest features are present and accounted for such as traveling between towns, upgrading the party’s equipment and getting into fights with all sorts of weird and wonderful enemies in a medieval fantasy world. Cute little beggars too, the type most people would almost feel bad for brutally murdering en masse.

Battles are standard fare for the series — players choose their attacks from a menu and take turns with enemies assaulting each other back and forth until one side gets wiped out. Four characters can be active at any time, though members can be swapped in and out at will for tactical shakeups. It’s still a great system, and there are a wide array of skills and weapons to unlock to help make things easier – from spewing flames across enemy lines to charming them into inaction, there’s a tactic for every eventuality. 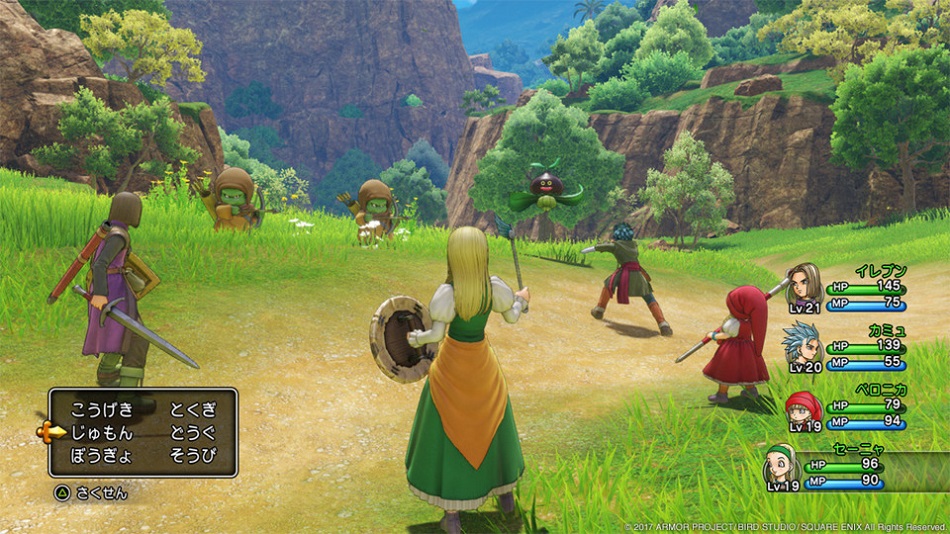 Random encounters are largely a thing of the past in Dragon Quest XI, with mobs of enemies clearly visible on the map to engage with (or avoid) as the player fancies. There’s no penalty for avoiding fights most of the time since the majority of the adventure is fairly easy. When things start getting more difficult later on, there are obvious avenues for grinding the party back up to speed if necessary, or for redistributing skill points that have been unwisely spent.

The only issue I have with Dragon Quest XI beyond the slightly-too-easygoing default difficulty is that it doesn’t do enough to break free from classic JRPG style. I’m not talking about combat here — no, it’s more that the quest and storyline progression are so heavily regimented that it often feels like players are being shuttled through the world rather than being allowed to head out and uncover its secrets at their own pace.

Speaking of pace, the rhythm of the storyline can be uneven at times since many locations feature a substory that must be completed before continuing with the larger adventure. I found most of them to be fine, though occasionally some of these were drawn out longer than I’d like such as the horse racing tournament featuring a conniving prince near the start of the game, or the story involving a mermaid which is jawdroppingly out of place, both in tone and execution. 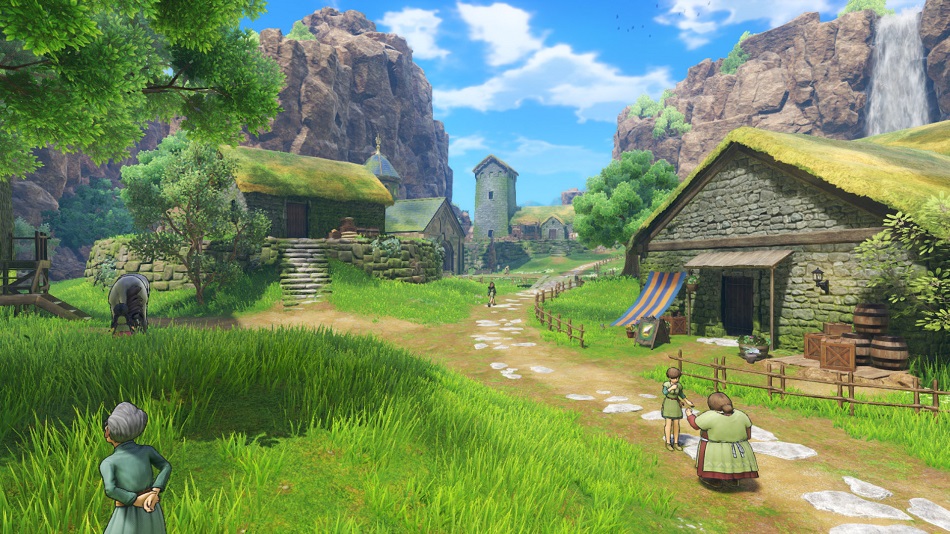 Script aside, the cast of characters in Dragon Quest XI is generally great. While not a standout ensemble, they’re a cheery and likable bunch who keep things interesting despite a couple of narrative missteps. My personal favourite of the bunch is probably Jade, a kung fu expert whose usual resolution to a problem is to kick it straight in the face.

The graphics and presentation are absolutely top-notch with superb environments and excellent voice acting featuring a wide range of accents from start to finish. The localization is well-done too, though purists may take umbrage at the fast and loose approach by the translators. I know enough about the original release to know that some characters, such as Jade, have been given entirely new names, and there are an absurd amount of puns strewn throughout, usually involving the series’ best known mascot, the slimes. There’s a fictional character named Goolysses, for god’s sake. That said, it’s full of charm, life and good cheer.

Dragon Quest XI is thoroughly enjoyable, lengthy and polished product with high production values that have been enhanced even further for the western market. Players can expect to spend upwards of a hundred hours uncovering its secrets and sidestories, and there’s a ton to see and do throughout, including a lengthy post-credits adventure that’s a direct continuation of the main storyline with loads more to uncover, including answers to some of the earliest and most obvious questions that crop up as the story first begins. People who aren’t interested in classic JRPGs may not find anything here to pull them back in, but for everyone else, Dragon Quest XI is guaranteed to scratch that particular itch for quite some time. Not bad, Square Enix, not bad at all.  Rating: 8.5 out of 10

Disclosures: This game is developed and published by Square-Enix. It is currently available on Playstation 4 and PC. This copy of the game was obtained via publisher and reviewed on the PS4 Pro. Approximately 87 hours of play were devoted to the single-player mode, and the game was completed with the true ending. There are no multiplayer modes, though I did also spend another 12 hours with the turbo button held down on the controller to rack up tokens in the casino.

Parents: According to the ESRB, this game is rated T and contains Crude Humor, Fantasy Violence, Mild Blood, Simulated Gambling, Suggestive Themes and Use of Alcohol. It should be fine for most kids to play given its vibrant cartoony visuals and pun-filled dialogue, though there are some occasional deaths throughout, and that weird mermaid bit. There’s also a number of costumes to unlock including some skimpy ones, but Jade looks awesome in a bunny suit so that’s a good thing.

Deaf & Hard of Hearing Gamers: The adventure is accompanied by reams of text, from subtitles during cutscenes to text boxes while chatting to villagers and the like. I can’t remember any point where the inability to hear audio cues would pose any sort of disadvantage, especially given the turn-based nature of the game. Text cannot be resized. 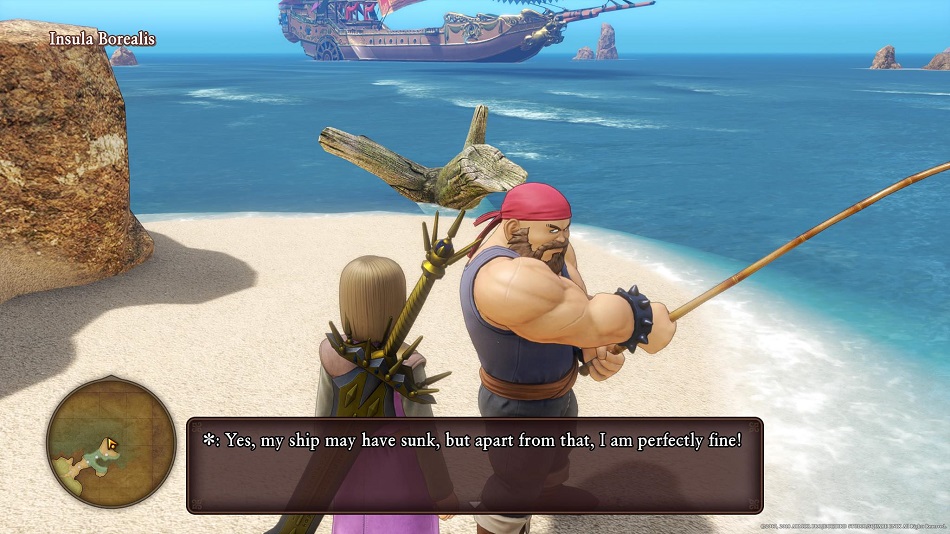 Remappable Controls: No, this game’s controls are not remappable. The game doesn’t offer a controller map diagram, but movement is on the left stick, triangle opens the menu, X accepts most selections and interacts with objects, R2 allows the player to dash… it’s fairly standard JRPG controls, really.