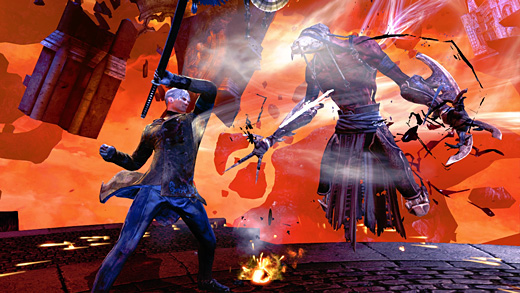 HIGH An all new fighting style to smash some skulls with.

Poor old Vergil. Just as it looked like the power to rule mankind was within his grasp at the end of DmC: Devil May Cry, it was snatched away at the last moment by that meddlesome brother of his. Instead of lording over us filthy humans, he instead begins this downloadable content (DLC) by wandering around with a gaping, sword-shaped hole in his chest and collapses at his parents' grave before plummeting into the depths of hell.

Is he actually dead? Probably not, but it soon becomes clear that his brains have sprung a leak somewhere along the way. Endlessly obsessing over what he considers a grand betrayal by his brother Dante, the weakened Vergil is forced into a gauntlet of demonic battles to regain his lost powers and to prepare for revenge on those who've wronged him.

That's one of the interesting things about Vergil as a character, actually. Despite his lack of basic human empathy, he does believe that his plans for humanity were genuinely the best choice for the species overall. He even attempts to save one of his minions during DmC: Devil May Cry—Vergil's Downfall

—sadly for him, a good chunk of the DLC is dedicated to taking advice from his obviously evil clone. (Never a great career move.)

Besides his poor choices in mentorship, the storyline in Downfall is also undercut by some of the most hideously rendered and animated cut-scenes on the market. It's not quite on the level of Dead Space: Ignition, but it's not far off either. The few in-engine cut-scenes during levels look head and shoulders above the artistic abominations bookending them.

Putting the story elements aside, it's important to note that Vergil shares none of Dante's standard attacks, with a number of differences separating them beyond the Yamato's own moveset. 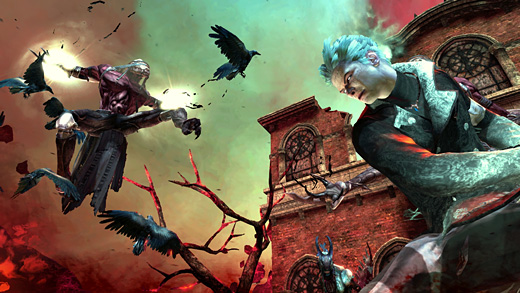 First, instead of having firearms, he summons blades and chucks them at enemies—with the neat twist being that these weapons operate independently of his own actions. Dante has to pull out his pistols to fire, whereas Vergil can have his blades casually pincushion distant enemies whilst chopping other demons into mincemeat. He also uses these blades to teleport things around with no need to pause other actions to do so.

Secondly, his Devil Trigger is entirely different. Rather than simply hurling enemies into the air and powering up his attacks, Vergil's Devil Trigger can be used to power different attacks, such as the Spiral Sword's glowing blades that orbit Vergil, and the Doppelganger attack which causes a second form of Vergil to mimic the first for dealing additional damage.

Vergil has a noticeable emphasis on charging and releasing moves at just the right time to power them up and afford them new attributes. Without mastering these timing based attacks, certain enemies will have a distinct advantage over Vergil who doesn't have Dante's arsenal at hand to switch between.

There's a couple of new enemies thrown into the mix, too. Wisps are birdlike demons that phase in and out of existence, acting as airborne cannon fodder for the most part. Then there are the Tomentors—essentially minibosses tossed in Vergil's path. Without mastering "just frame" attacks like the Volcano, these guys can be an absolute nightmare. Their worst attribute is that they throw what look like brambles and thorns around the arena, and these linger on for a long time while also remaining deadly to the touch.

…And that's Vergil's Downfall. It lacks the style and story beats of the main campaign, but it also adds some fresh and exciting combat into the mix for players who've mastered everything that Dante has to offer. It should take between two to three hours to complete first time, and multiple playthroughs are certainly encouraged with some nasty enemy configurations popping up during Vergil Must Die mode.

For those who've been hoping for more storyline to extend the core experience, DmC: Devil May Cry—Vergil's Downfall

only partially delivers. For those expecting a diverse new character who can wreak absolute havoc amongst his foes however, Vergil's Downfall comes through in spades. Rating: 8.0 out of 10.


Disclosures: This game was obtained via paid download and reviewed on the Xbox 360. Approximately eight hours of play were devoted to the single-player mode, and the game was completed on all difficulties. There are no multiplayer modes.