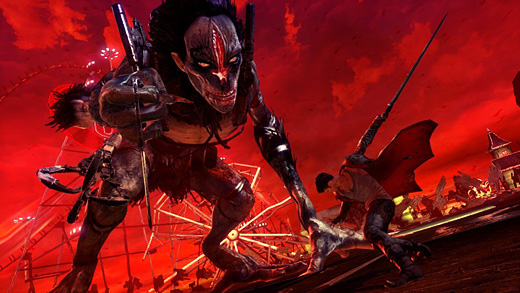 HIGH Comboing through a group of enemies like a tidal wave, leaving nothing but their shattered remains in Dante's wake.

LOW The penultimate boss fight is disappointingly pedestrian compared to the rest of the game.

WTF The battle against Bob Barbas is… is… it's…

It's fair to say that DmC

, the reboot of Capcom's beloved Devil May Cry series, hasn't exactly had an easy time of things. Not due to any internal development problems, but to an unprecedented level of fan hostility towards the project.

Once it became known that Capcom was outsourcing development to western studio Ninja Theory, it became almost impossible to head into any forum discussing the game without immediately being assaulted by mockery at the new direction, mortified outrage from the fanbase, and the puerile splutterings of the truly deranged. The whole sorry business became what was essentially the online equivalent of a prisoner's "dirty protest"—the assumption that stinking things up enough would ensure that any reasonably-minded person wouldn't want to touch the game with a ten foot bargepole.

So were the haters right? Is DmC a shoddy, barely-functional brawler with all the depth of a puddle that spits in the faces of "real" Devil May Cry fans? Or is it good enough to convince even the most hardcore of skeptics, shame them for all eternity and fill their dark souls with light? The answer isn't going to please those "dedicated" fans wishing failure upon the title, that's for sure—DmC has turned out to be a magnificent, accomplished action game brimming with confidence, bursting with imagination, and stuffed with stylish, fluid and exciting gameplay.

Ninja Theory hasn't exactly messed around when rewriting one of Capcom's most beloved franchises. Previous heroines are no longer part of the equation—Lady is gone, Gloria's out of here, Lucia quit her day job, and Trish is nowhere to be seen. Even the star of the show, Dante himself, is almost unrecognizable. His classic appearance has been replaced with a younger, angrier facsimile sporting fanboy-enraging black hair and punk stylings. 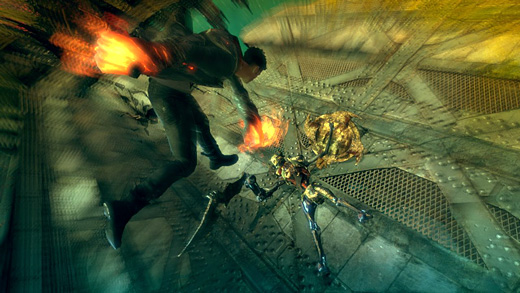 The rest of the game's had a makeover, too. Most of DmC takes place in Limbo, a seriously messed-up demonic realm existing parallel to the real world. It's a gnarled and grotesque parody of what normal people can see, and one which delights in repeatedly dragging Dante into it before attempting to viciously murder him. Contrary to the real world environments which are bathed in subdued greyed-out hues, Limbo is a chaotic explosion of vibrant colours and warped architecture, lending this reboot an aesthetically pleasing playground in which to repeatedly mutilate hellspawn as Dante tumbles and slides across each battleground like the athletic harbinger of death that he is.

The controls have been simplified in intelligent ways. For example, launching and evading now have dedicated buttons, and the new Demon and Angel weapons are each mapped to a specific trigger. Holding down either one will activate its respective class of weapon, allowing for freeform switching on the fly. Furthermore, each will change the base attribute of Dante's grappling maneuvers—the Demon Pull hauls enemies or objects towards Dante, while the Angel Lift will see him scooting over to them instead.

Thanks to this reworking of the controls, closing the distance with a Stinger, extending it into the Trillion Stabs, cancelling into an Aerial Rave, dodging in midair to avoid a grounded enemy's attack, and then hauling the original target back in before booting him across the arena and dropping into a charged Drive attack is as easy as pie and looks as stylish as all hell. The combat also has a fair amount of depth beneath the flash—enemies often have hidden weaknesses to be exploited which aren't necessarily obvious at first, often leading to disturbingly satisfying outcomes involving massive amounts of bodily harm dished out upon their discovery.

Take the first boss for example—when it retreats into the shadows and sends a whirling blade of death spinning in Dante's direction, getting the hell out of the way probably seems like a pretty good idea. What isn't necessarily obvious is that parrying the blade with Dante's own will send it spinning back into the Hunter's face, ending the sequence prematurely and allowing Dante to go to town on the colossal beast while it recovers. Then there are enemies which can only be injured while in an Angel or Demon stance, requiring players to think on their feet and adapt to each situation as necessary—as well as being able to negate certain demonic attacks simply by being in the appropriate form. 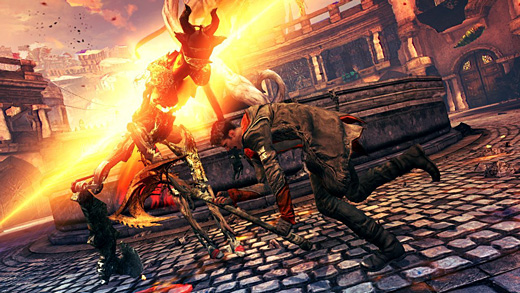 Experienced demon hunters may find the initially selectable difficulty levels a little too easy, but there are several more to unlock. While they might never hit the same level of challenge as some of the previous games, they should be enough to keep almost anyone on edge. It's a slight shame that they're not available from the outset, but it does ensure that players will be ready for the tougher challenges when they come.

As for the story… well, it's fine overall. As the game begins, Dante's out getting drunk, taking strippers home to his trailer on the pier, and generally being an irresponsible young tearaway. Naturally, this all changes the following morning when a beast twice the size of a building tears said trailer in half. Understandably miffed by this transgression, he spends the rest of that day chopping, stabbing and hacking the hell out of hellspawn before being invited into an anti-demon resistance group by a mysterious witch named Kat and its enigmatic leader, Vergil.

My feeling is that the tale could have been a little more fleshed-out to illustrate how Dante became such a belligerent young boor, and the plight of those pitiful humans struggling under the yoke of their demonic oppressors is more or less confined solely to Dante's female sidekick, Kat—this lack of exposure to the larger world makes it tough to care about the characters or the overall theme of humanity's enslavement. It's certainly more accomplished storytelling than the almost-random lunacy inherent to the previous games and it does wrap its tale up quite nicely, but it also lacks the heart or level of characterization that Ninja Theory previously accomplished with Enslaved: Odyssey to the West.

The slightly disappointing storyline aside, it's impressive just how well the whole thing gels together, and DmC: Devil May Cry

succeeds on pretty much every level imaginable. All the expected series elements are present, it looks great, it sounds great, it's extremely well-paced, and offers a ton of content and replayability despite a slightly-short running time. In spite of the naysayers, Ninja Theory has come through to deliver one of the very best hack-and-slash games to hit the market in a very long time, and if that's not a heartwarming tale of triumph in the face of adversity, I don't know what is. Rating: 9.0 out of 10.


Disclosures: This game was obtained via retail and reviewed on the Xbox 360. Approximately 20 hours of play was devoted to single-player modes (completed 2 times) and there is no multiplayer.

Parents: According to the ESRB, this game contains blood and gore, drug reference, intense violence, nudity, sexual content, strong language and all that good stuff. The demonic images can be frightening, there's no shortage of blood or salty language, and there are sexual elements. Keep the kidlets far, far away.

Deaf & Hard of Hearing: Subtitles are available, though without the ability to hear certain enemy cues the gameplay will be a little tougher to keep a handle on. Sound is also a good cue in locating some of the game's hidden collectables. The lack of onscreen info for these things shouldn't be enough to prevent players from having a good time, though.

I dunno its more a 6 than anything else, a 5 being average, a 9-10 something they do not make these days. Anything the mag rag industry dubs as 8 is more like a 4-6 0-o Game play is pretty good despite itself and all the flaws. I’d put Bayenette at a 7 or 8, everything fell into place the cheesy story was treated well, the voice acting was good the gameplay is almost great and its actually difficult. Gamers these days are either mindless zombies who love everything and think most crap is a 9 or OCD riddled detail… Read more »

Sure they went about it the wrong way but the game is bad. Not 1/10 bad but not 6/10 good. The character of Dante is awful, looks aside, his attitude is off-putting. His faux tough guy persona reeks of trying too hard to be cool. It’s kinda like that creepy 50 year old uncle that thinks he is “down” with the kids these days. Not even getting into Vergil, who looks fine but does things out of character(gun anyone?). Next is gameplay, it’s okay. It should be better than okay but it isn’t. The stance system is clunky and unnecessary.… Read more »

Decent game a bit too easy with a horrible looking lead.

I heartily disagree on DmC being one of the very best Hack ‘n Slash games on the market. While I don’t think it’s absolutely horrible, the huge flaws surrounding the game stand out like a sore thumb to me as a avid lover of action titles and story driven games. I’ll see if I can address the parts of the game in order: Gameplay: It’s not terrible, but it’s not great either. The game has a much lower skill ceiling compared to other titles and the bar to entry isn’t much lower; instead the game often relies on hand-holding the… Read more »

I misread a bit of this and ended up with the image of “a puddle that spits in the faces of “real” Devil May Cry fans”. If only such a thing existed.