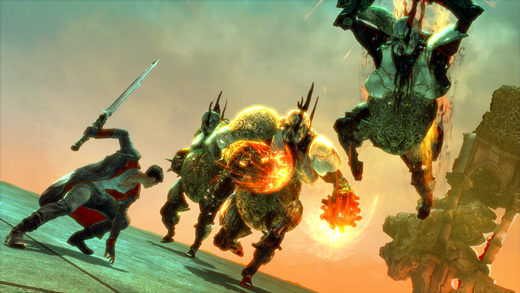 LOW …that takes too long to really get going.

WTF The time required for an entire session is substantial.

When Ninja Theory's DmC: Devil May Cry launched earlier this year, it wasn't just the omission of classic Dante's pretty white coiffure which drew howls of outrage from the fanbase—the beloved Bloody Palace mode wouldn't be ready in time for launch, instead being released as free downloadable content (DLC) shortly after the game hit shelves. Now that it's here, the only question remaining is whether it's a worthwhile addition to the game or not—and it is.

For those who don't know, Bloody Palace is a mode which dispenses with all the other mechanics outside of combat. There's no terrain traversal, no exploration, no platforming—just good old Dante himself and an enclosed arena with increasingly difficult waves of enemies trying to stick a blade through his eyeballs. Whether he successfully chops all his foes into mince or gets smushed into a fine paste, the overall score is then recorded and sent off to online leaderboads for everyone else to gawp at in disbelief (or to laugh their backsides off at.)

There is one more addition to the combat mix not seen in the main game, though—there's now a time limit ticking down during combat. Once it hits zero, it's game over regardless of the player's health.

Killing enemies, showing off and performing well throughout earns time extensions to this limit. Every twenty rounds a boss is encountered, often streamlined from their storyline incarnation with cutscenes shortened or excised, and then it's time for a new backdrop and fresh waves of enemies to mutilate. Survive all one hundred and one floors and Dante's a winner. A battered and bruised one, probably, but a winner nonetheless.

If there is one fatal flaw in the overall design of Bloody Palace, it's that there's no way to skip the early waves in order to progress to the significantly more interesting challenges that crop up during the latter half. Spending forty minutes tearing through weak, ineffectual enemies before they start showing a bit of spine can become mind-numbing until the mode really hits its stride.

Also, there seems to be a bug (in the PC version at least) where the music simply cuts out shortly after the first boss—it happened to me three times in a row.

So, there's DmC: Devil May Cry—Bloody Palace in a nutshell. It may not be entirely to my taste due to the fairly demanding time requirements—upwards of an hour per complete run—and a lack of selectable waves from the menu screen, but as a free addition to what's already an absolutely kickass core game? It can only be seen as a good thing. Rating: 6.5 out of 10.


Disclosures: This game was obtained via free download and reviewed on the PC. Approximately three hours of play were devoted to the single-player mode, and the content was completed. There are no multiplayer modes.

I’ve been looking for someone to review this Dlc for a while. Thanks.