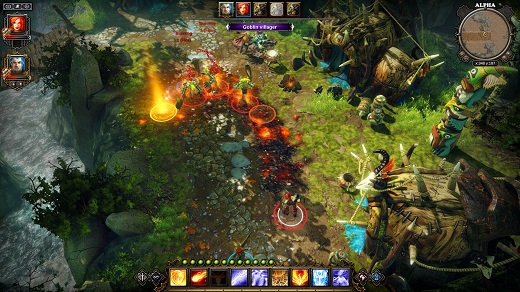 HIGH The Pet Pal trait. Players should be forced to choose this.

LOW Some of the so-called ‘puzzles' are mind-numbingly awful.

WTF The cheese vendor loudly and repeatedly hawking his wares had no cheese to sell despite them being in plain sight on the counter.

Divinity: Original Sin is unabashedly old-school in its approach to delivering a role-playing game. It's crafted in the classical top-down format made famous by titles such as Baldur's Gate, and it offers a depth and freedom of play last seen in games like Planescape: Torment—a quality rarely afforded by most contemporary offerings.

The first example of this approach is when creating the two main characters. There are a stunning amount of customization options available, with nearly all facets of their personality and skills available for tweaking. From rogues to wizards and spell resistances to personality quirks, there's a lot to consider when first starting out on the adventure… and the usefulness of any of it may not be initially apparent.

As might be expected, this old-school approach holds players by the hand just long enough to hurl them in front of an oncoming train… and it's awesome.

Divinity is revealed to be an open-world experience, but wandering down the wrong path will result in getting the party annihilated in a short time. The difference of even a few levels between player and enemy groups often leads to being fatally overwhelmed, and the overall lack of guidance isn't confined to keeping players in the dark about where they can safely tread—there are no quest markers and no pointers towards the critical path, so frequent use of the in-game journal is required to progress the campaign without forgetting what the hell's actually going on.

Speaking of the campaign, solving many of the quests is surprisingly open-ended. At one point I came across a talking clam bemoaning his fate at being unable to hop into the nearby sea. Following an impassioned plea that could undoubtedly melt the iciest of hearts, my backup character mentioned that there might be an alternative solution—sell that weird talking clam thing for a small fortune to the local merchants! Or if we wanted to be heartless deviants, we could simply cook the thing and enjoy some stat boosts after gobbling him down instead. The amount of leeway afforded is invigorating.

Combat is turn-based, with a stunning level of depth and diversity available, ranging from a wide variety of character classes to the way elements interact with one another—lobbing a fireball into a flammable ball of gas can lead to explosive results. Combining lightning and water can also lead to hilarious spectacles of death and destruction, as one might guess.

The lack of a grid in combat zones does mean that targeting can be slightly finicky though—too often an enemy unit would sway during their idle animation just as I clicked confirmation of my attack, causing my own character to walk around pointlessly while wasting precious action points instead of stabbing miscreants in the hips.

Worse, incurred status effects can become insane over time. Skipping a turn after failing a dice roll against ice is one thing, but having multiple heroes slip on their backsides and be downed for three turns each against a mob of enemies leads to excessive time spent watching rather than participating in glorious battle.

While Divinity: Original Sin sticks closely to the freeform nature that made many classic RPGs great, it would have benefitted from at least a few modern improvements to its user interface.

For instance, if one party member has the ability to talk to animals, only that character can interact with them, even when the group is banded together in one place. Likewise, if one character has an item to hand in to an NPC, only that specific character can do so. The inventories of the party members typically fill up with junk pretty fast during play, so trying to find out which character is holding what is more laborious than desired.

The worst part, though, is that several of the puzzles are absolute garbage.

It's a good thing Google exists, or I'd have likely just given up on the game thanks to one particularly despicable test incorporating pixel-sized switches hiding in the walls, one near-invisible bugger lurking atop a staircase, a cryptic clue hidden in a book I wrote off as a junk item, and a compass I didn't even notice lying unobtrusively in the dirt. I've no time for poorly-defined nonsense like this, and there are several more instances where the way forward felt more like it relied on a lucky mouse swipe than actually thinking things through.

Despite these complaints, about ninety percent of Divinity: Original Sin is excellent. The other ten is awfulness, trading intelligent and complex quests for pixel hunts, unclear puzzles and a complete lack of direction.

As much as I loved the bulk of the game, by the end I was burning out, and burning out fast. Despite that, I'm glad that some studios are still willing to show an almost insane level of ambition in realizing the games they want to make without compromise, even if it does lead to a few dire moments here and there. Rating: 7.5 out of 10


Disclosures: This game was obtained via publisher and reviewed on the PC. Approximately 100  hours of play was devoted to single-player modes (completed 1 time) and 4 hours of play in multiplayer modes.

Parents: According to the ESRB, this game contains… well, not much. The ESRB hasn't rated it. There's some blood, guts and bodies leaking fluids all over the place, though the tone's extremely lighthearted. Not for kids, but teens with a few years behind them should probably be fine.

Deaf & Hard of Hearing: The majority of dialogue in the game is delivered via text, and only the odd battle cry will slip on by.