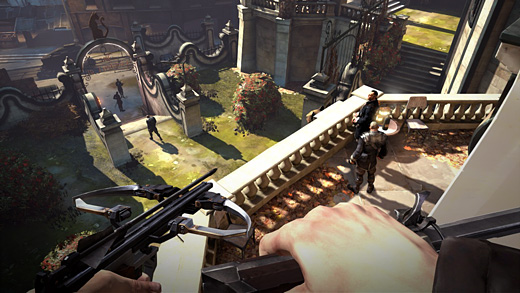 LOW The penultimate mission seems to drag on forever.

WTF The "shocking twist" can be seen coming from orbit by a blind man with his eyes closed… Not that having his eyes closed actually matters, what with him being blind and all.

The city of Dunwall isn't exactly a happy place.

A plague of rats sweeps the city streets, killing everyone in their path or infecting them with a hideous disease which makes them bleed from the eyes before going barking mental.  The City Guard have declared martial law, the entire place is under a strict lockdown and… oh yeah, the Empress just got stabbed to death by assassins.

Into this picture of unremitting despair comes one Corvo Attano, failed bodyguard of the late Empress, and the man who's been framed for her death and the subsequent kidnapping of her daughter Emily.

Only he didn't do it! He's innocent!

After being sprung from prison by some anonymous benefactors, he's going to prove that innocence and rescue that princess even if he has to kill millions of people to do so!

's one of those "moral choice" games where the main character can stomp about like a bastard murdering everyone in a raging torrent of bloodshed, or sneak around in the squalid, filthy streets attempting to ghost by while performing his tasks as bloodlessly as possible. Okay, so this nonlethal approach involves passing his targets along to rapists and slavers to live out the rest of their lives in unending misery, but so what? Nobody dies, yeah? It's the moral choice! Just hand her over to that gentleman there with the visible erection and the heavy, out of breath panting. There's a good lad.

Aiding Corvo in his work is The Outsider, a powerful spiritual presence who confers supernatural skills upon him such as the ability to blink past enemies in a flash, turning bodies to ash to prevent their discovery, or the ability to inhabit other living creatures for a short while. These skills are upgradable via a bit of sleuthing to uncover mystical runes or helping characters with sidequests, and serve to make the already skilled Corvo even more of a unstoppable force of nature. These lead to some unique gameplay mechanics, but there's one slight problem—Dishonored is primarily a stealth game where the stealthy approach isn't a great deal of fun.

First off, everyone hates Corvo. He may be wearing a mask to conceal his identity, but nearly everyone in the city's first instinct is to murder him. The few friendlies that exist are hard to tell apart from the ones who want to see Corvo lying face down in a puddle of piss, so a lot of the stealth involves finding a quiet corner and strangling anyone who comes near while piling up unconscious, snoring bodies ten feet high. There's only one mission in the game where it's possible to peacefully mingle with most of the populace, and it's telling that this section is about fifty times more enjoyable and interesting than the rest combined. 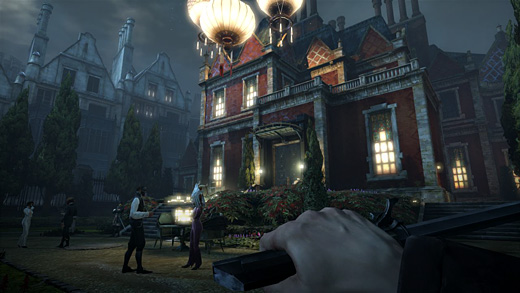 The alternative approach is going on a murdergasm, stabbing and shooting everyone in Corvo's path, or using slightly more devastating supernatural skills to summon a swarm of rats that'll chew enemies down to nothing within moments as they writhe around in horrified agony. It's more fun than crouching in some urine-stained corner for ages waiting on that golden window of opportunity to slip on by, but even as an action game with supernatural spice, it remains pretty average.

There's little variety in enemies or their tactics, leading to skirmishes that soon become exceptionally repetitive. The controls are fluid, with parrying and counterattacks coming quickly and easily to bear—but, as with most stealth titles, each fracas feels more like a simple stumbling block to overcome (or flee from) than a fully-developed gameplay mechanic. It's a functional and valid option, but rarely a great deal of fun. Oh, and embarking on this path of violence also puts players dead on course for the "bad" ending—which isn't unsatisfying, in all fairness.

Besides both stealth and violence being letdowns, the tone of the game also hurts the overall experience. Nearly everyone in the city is both horrible and intensely boring, an absolute bastard, or completely bereft of personality, with the sole exception of Samuel the boatman. (He's alright.)

Listen in to their thoughts and they're thinking of killing someone else, maybe killing themselves… or perhaps Corvo will learn a little heartwarming story about how they were viciously tortured as a child or sold to a brothel at the age of ten for a bottle of wine. It becomes borderline parody during some moments, as if the developers organized a contest to see just how relentlessly horrid they could be to everyone involved. There's hardly a speck of light in the whole damn game. Why would Corvo fight for the future of these sad sacks?

It's not all doom and gloom for Dishonored though. Corvo's actions genuinely do matter when it comes to the final outcome of the game, and repeatedly sheathing his dagger in his belt rather than in someone's face will profoundly affect the entire final level, the fate of Dunwall, and even the personalities of those around him. Sure, some characters change their outlook on life way too much and far too fast since everything happens in the closing chapter, but it's still a neat and substantial twist to the tale.

It's a shame Dishonored

didn't follow through on its high potential. The kernel of a great game is in there somewhere, but so many elements of the design work against it that it's tough not to feel disappointed by how it all panned out. The occasional highlight— usually involving summoning rats in a bid to seriously ruin some poor bugger's day—just isn't enough to juice up the surprisingly pedestrian gameplay. Coupled with lifeless, two dimensional characters and a world that's damn near impossible to care about beyond its interesting visual design, Dishonored's no more than a passable title that sadly squanders what could have been some real star power. Rating: 6.0 out of 10.


Disclosures: This game was obtained via rental and reviewed on the Xbox 360. Approximately 22 hours of play were devoted to the single-player mode, and the game was completed.

When you make multiple opinions on the same game, it would be helpful to include a link to the other reviews. Just something to consider, thank you.

[quote=Anonymous]When you make multiple opinions on the same game, it would be helpful to include a link to the other reviews. Just something to consider, thank you.[/quote]We do make an effort to add links into the actual review when we can, but even when we do you can find links to the other reviews (Main Review and Second Opinion) in the right hand column under the heading: “Similar Game Reviews/Articles.”

Yep. Pretty much what I thought of Dishonored (although I did’t have fun sneaking past guards and teleporting through the city rooftops). Boring and extremely predictable storyline, unlikable characters with barely a hint of personality, contrived situations to allow for the non-lethal options and a rushed endgame.
I have to admit, however, that I did find myself caring for little Emily.