Clawing itself out of the abyss. 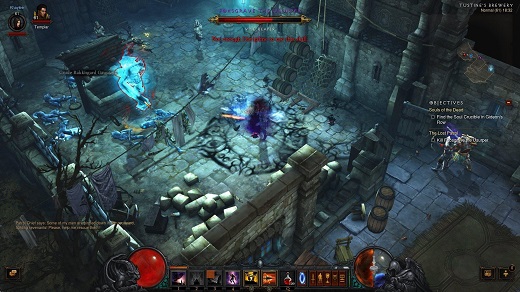 HIGH Nearly everything I hated about vanilla Diablo 3 has been fixed and improved.

LOW Hundreds of Blood Shards wasted, with nothing to show for it.

WTF It took way too long for the Real Money Auction house to disappear.

Anyone with the uncommonly good taste to have read my initial review of Diablo 3 back when it first launched in 2012 will know that I wasn't exactly a huge fan.

In my defense, this is primarily because it was awful, shoehorning multiple design decisions into the game that were clearly not in the player's best interests. From a ridiculously low chance of uncovering decent loot (shoving players towards the real money auction house) to an always-online system that wasn't capable of providing gamers with a smooth gameplay experience, it's fair to say that it had some issues.

To Blizzard's credit, they've done a decent job of bowing and scraping to my previous demands, bending over backwards to fix the things I deemed intolerable. As a result, the many patches since that initial launch have certainly smoothed things out a bit in this first expansion pack.

To begin with, the loot issue has been remedied. "Loot 2.0" now ensures that legendary items drop more than once per hundred years of grinding. Even better, they have a large chance of being useful to the class that discovered them. With the Auction House getting unceremoniously binned—essentially for being the absolute antithesis of what Diablo's all about—this is a more than welcome change that makes playing far more rewarding than it used to be. It's proof positive that decisions made to reward gamers are far better than decisions made to line developer's pockets.

On the other hand, it's not all roses—Diablo 3's still an online-only game for some reason. For the most part this decision works fine, and it sidesteps the worst of the ridiculously unstable Diablo 3 launch. It's still got issues, though. At one point I was playing with a response time of over 2000ms. That basically means that it takes two whole seconds for inputs to register, rendering the game unplayable. I then got kicked out of the server with the game cancelling the bounty I was just about to complete, and then I had to wait in a queue to get back in—only for it to remain a thoroughly lag ridden mess. While this sort of mess isn't a frequent occurrence, it's disheartening to see that this nonsense persists.

As for what Reaper of Souls itself brings to the table, there's some pretty decent content here. A whole new Act is included, detailing what occurs after the end of the main storyline in Diablo 3. The story isn't incredible, but it involves the good guys not having a clue with how to safely store away Diablo's squishy bits before a fallen angel decides to snaffle them up for himself like the dick he undoubtedly is. It's a pretty lengthy act, taking me approximately ten hours to play through at a moderate pace.

Another big addition is a new character class, the Crusader. Essentially a walking tank equipped with a shield the size of his (or her) body and a flail to smash enemy skulls, they're good fun to take into battle with a number of interesting and varied skills available. The Crusader was never in any danger of replacing my Monk at any point, but it still provided an enjoyable alternative way to play.

Characters can also now level up to 70, with a number of additional unlockable powers and passive boosts available for doing so. That Monk I just mentioned may have been a hardass at level 60, but by the time she hit 70, she was wrecking face like never before. Even beyond the maximum level, experience points continue to accrue and can be used to power up base attributes such as movement speed or the chance of delivering critical strikes.

Then there's the all new Adventure Mode, which allows characters to flit between Acts as they please after completion, spitting out bounties all over the map to be hunted down and massacred for blood shards which can be traded in for randomly generated rewards. Sadly, these rewards are usually complete and utter crap—after trading in hundreds of the little red buggers, I never got a single legendary item or anything remotely useful.

Although it's still not perfect, I'd say that this expansion hugely improves Diablo 3 overall, and Reaper of Souls is closer to the Diablo experience I was originally after. Players who were disappointed with the initial release may just find that it's worth giving the series another look. Rating: 7 out of 10


Disclosures: This game was obtained via publisher and reviewed on the PC. Approximately 25 hours of play was devoted to single-player modes (completed multiple times) and 7 hours of play in multiplayer modes.

Parents: According to the ESRB, this game contains: blood and gore and violence. While minions aren't getting their brains popped out of their skulls in grisly, slow motion closeups there are a fair few slaughterings taking place throughout. Teens should be fine, though young uns should probably play something else instead.

Deaf & Hard of Hearing: No audio cues are necessary for successful gameplay and all dialogue is subtitled.