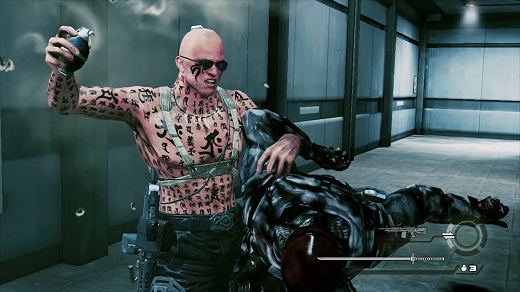 HIGH Bringing a sledgehammer to a gunfight… and winning.

WTF What is it with all these bats everywhere? And what does Ivan have against shirts?

Getting Devil's Third to market has been a crazy trip for Tomonobu Itagaki and Valhalla Studios. During development, the title has switched graphics engines something like four times and managed to endure what should have been fatal transitions between multiple publishers and partner studios along the way. The game has survived against all odds, but one has to wonder… Was it worth it?

And really, what is it?

So, the setup goes a little something like this… When a rogue ninja blows all orbiting satellites out of the sky and frazzles modern technology on earth, things are looking mighty grim for all concerned. Therefore, it's up to former terrorist and shirt-avoiding man-mountain Ivan to bust his way out of a luxury cell in Guantanamo Bay during a random prison riot to kick all his former associates in the teeth before they can take control of the entire world.

Given such a troubled history, it should come as little surprise that the campaign isn't particularly good. It may be the brainchild of the former Team Ninja head, but this isn't Ninja Gaiden with guns; that would require at the very least a deep and nuanced melee system and the finest action game AI ever devised. No, Devil's Third has enemies that will cheerfully blow themselves up with rocket launchers whilst trying to shoot Ivan through a solid brick wall, and the melee is really just hammering an attack button and hoping nobody guns him down before caving their chest in.

While Itagaki's work at Team Ninja was known for graphical prowess, Devil's Third is less a visual tour-de-force and more a tour-de-farce. It's true that looks aren't everything, but nobody discounts them entirely and Devil's Third isn't a pretty game. Boxy environments, the kind of texture pop-in only the Unreal engine can provide, an inconsistent framerate and lackluster animations all conspire to make it look like something that's escaped from a previous generation, although I must say that I'm not quite sure which generation it was.

So yes, the singleplayer's pretty mediocre with few tricks up its sleeve, a relatively short running time and a final boss that made me want to gouge someone's eyes out with his stupid instakill attacks. It's not awful, exactly, but there's not much reason to come back to after an initial playthrough.

So, the campaign is probably just worth a rental, but the online? That's a whole different story altogether—I've enjoyed it more than any online shooter in recent memory. If enduring the shonky production values aren't an instant dealbreaker to prospective players, the multiplayer is absolutely worth checking out because it's awesome.

It takes a while to click, but when it does, it clicks hard. There are a ton of guns and outfits with stat bonuses attached to unlock, a wide variety of arenas and some pretty cool modes to get stuck into. The framerate occasionally stutters to the point where it can affect aiming in certain situations, but it's nowhere near as bad as in the main campaign. Most importantly, the game's systems integrate well, with players able to approach combat situations as they see fit. Climbing up walls, sliding into a fight, a hilariously weird 'Aim lock' that propels them towards their opponent with their weapon raised—the variety of combat options is excellent.

Something that also works unexpectedly well in Devil's Third's favor is how inaccurate standard assault rifles are. In many games where characters have a low health pool, getting shot from mid-range is essentially the end of the encounter. Not here. Often there's enough time to fight back or try and flee, though selecting the wrong option will still lead to death. This inaccuracy also has the side benefit of making kills feel more meaningful. Lead has to be poured on for a kill, and escaping prey needs to be hunted down quickly.

The multiplayer also has an exceptional array of interesting and relatively unique content, though it's possible that some of the better modes will be ignored due to the prevalence of the Clan Warfare system. When money's on the line, will there be time to lob fruit into blenders, chase chickens around with wild abandon and engage in massive hand-to-hand bar fights? One can only hope.

Unfortunately, in spite of how much better it is than the campaign overall, the melee's still too questionable in multiplayer mode. I'm terrified of getting into duels with other players simply because there's rarely time to counterattack, and blocking strikes often lasts until someone else ambles along and guns the others down. Also, breaking off from an enemy is nearly impossible in certain instances, and the camera will screw up if backed against a wall. I enjoyed taking the game online, but it sure ain't perfect.

More than anything, Devil's Third feels like a last-ditch salvage job that scrapes together what could be rescued from previous builds, slaps it all together, and then shoves it out the door. That said, as rough as Devil's Third can be in many ways, I've had an absolute blast with it most matches. It can provide great times for those able to look past all the unsightly rough edges, but it wouldn't surprise me one bit to hear that many simply won't be able to—and the framerate affecting aim (and therefore gameplay) in multiplayer when things get busy is one great failing that's incredibly hard to overlook. Rating: 6.5 out of 10


Disclosures: This game was obtained via publisher and reviewed on the WiiU. Approximately 30 hours of play was devoted to single-player modes (completed 2 times with multiple stage replays) and 100 hours of play in multiplayer modes.

Parents: According to the ESRB, this game has not been rated—but it's clearly not intended for younger audiences with smoking, drinking, blowing off limbs and all the rest all present and accounted for.

Deaf & Hard of Hearing: In both single and multiplayer the lack of audio clues as to enemy locations or other signs of danger would certainly be detrimental in regards to providing a level playing field.

Shame to hear that so much went wrong in the final execution. Yes, it had a troubled development, but that’s no excuse for an unpolished product. I think I’ll take your advice and only rent it, just to see what it offers.