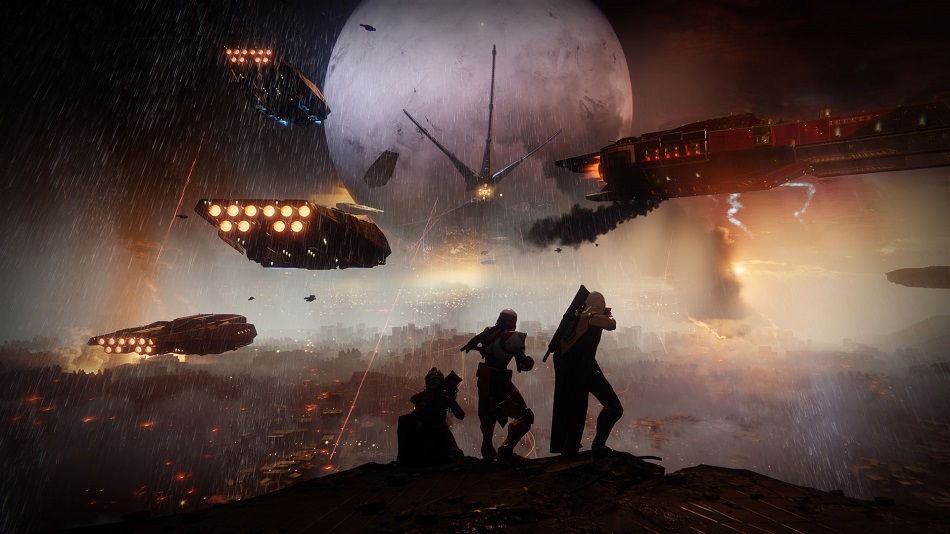 LOW The endgame feels like a pointless waste of time.

WTF Main bad guy annihilates humanity’s last refuge, then sits on his ass for the rest of the campaign.

Humanity doesn’t seem to have a great deal of luck in the Destiny universe. For years they’ve been pushed back to the last remaining stronghold on Earth. Then things get even worse in Destiny 2 when aliens come screaming in out of nowhere and raze that stronghold to the ground. The Guardians of our particular galaxy try to fight back, but it all goes monumentally sideways. The result? Essentially, everybody loses all their gear from the original game.

Starting off with what Destiny 2 got right, the main campaign isn’t all that bad. It’s not great, but it is a noted improvement over the first’s meager offerings. For starters, there’s something approaching an actual narrative, and a main villain who seems reasonably menacing from the outset, even if by endgame he feels more like an inconsequential bug to be squashed. It’s a little short and there are irritating moments where progress is halted until milestones are achieved, but it’s still an overall improvement.

The meat of Destiny 2 is found in the gunplay… and it’s largely okay. It’s solid and not overly thrilling, but it does the job. Enemies tend to be a bit on the brainless side — players unload into groups of them with a selection of weapons ranging from assault rifles to rocket launchers until their hit points reach zero, and then repeat until everything stops twitching. The various nasties occasionally spew out new weapons and armor upon kicking the bucket, which may or may not be a desirable addition to the player’s arsenal.

What I’ve described is all pretty standard stuff so far, and will be familiar to players of the previous iteration. However, Bungie has tinkered with the core of what makes Destiny tick to such a ludicrous extent that there’s barely any reason to play past the endgame. For example, skill trees have been overly-streamlined to the point where there’s little variety in potential builds because certain abilities seem utterly useless — why would anyone choose a grenade skill that barely tickles adversaries when there’s one that will annihilate enemies in a flash right beside it?

Then there’s the loot system. The first Destiny had a ton of weird and interesting weapons, all with various perks and stats that could vary from drop to drop. Destiny 2 has an alarming lack of interesting armaments, by comparison. There’s also no grinding for a weapon with perfect stats (known as God rolls) now that every given weapon will have exactly the same specs with no random pool of perks to draw from, and the range of bonus effects tend to be mediocre compared to the wilder guns on offer last time around. 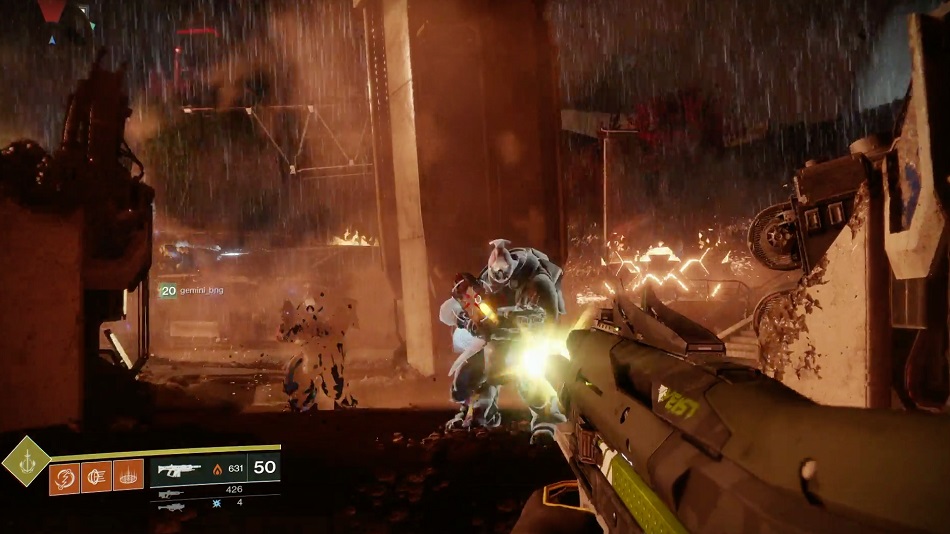 The missions are as dull as the firearms. Primarily taking place across four planets with the option to group up in fireteams or go it alone, there are a variety of strikes and public activities on offer in the hub worlds – things like taking down a heavily armored tank or interrupting an enemy mining expedition – but few stick out as interesting on a visual or mechanical level. Since the loot is generally boring as all hell, there’s little reason to roam around grinding and replaying these events once players are content with what they have.

In addition to this, the PVP modes are still interminably dull. To be fair, the mechanics behind them are at least reasonably competent, offering predictable firefights with various objectives and rules sprinkled in — defusing bombs, stealing crests from fallen enemies, straight up deathmatch… the usual. However, shotguns and sniper rifles are now classified as heavy weapons with very limited access to them, so there’s less variety in battle. Then, at some point players will start pulling out power weapons and instant-kill supers that feel completely at odds with the earlier methodical approach. It all devolves into an irritating, chaotic mess. I’m sure it has its fans, but this sort of messy, mundane multiplayer repels me whether I come in first or dead last.

What they’ve done with the game is already disappointing compared to the previous entry, but what really screws Destiny 2 up is the absolute disdain shown towards their players. For instance, the first expansion actually took content away from those who didn’t want to shell out for it by ramping up the level requirements for endgame activities beyond what vanilla players could reach without purchasing the new content. Taking content away from players who balk at the idea of spending more cash is utterly reprehensible.

Of course, there are also lootboxes that can be purchased with real money or earned in-game, but they’re just another example of disrespect towards the fanbase. It was discovered that Bungie was throttling endgame EXP gains, surreptitiously requiring a greater time investment to unlock them — but really, the ostensible goal was getting players tired of waiting to funnel additional funds in. Bungie issued a grovelling apology dripping with insincerity after they were found out, so between these slights and the middling nature of the game overall, it comes off as a complete misfire of a sequel that’s nearly impossible to recommend.

Even if Bungie backtracks on some of these horrendous missteps, there’s evidence that the dev team is either flailing around without a clear idea of the experience they want to present, or even worse, they’re happy to offer the least amount of mediocre content possible until the player base starts pushing back. When free-to-play titles like Warframe and Let it Die seem monumentally more generous and offer vastly more entertainment value than a triple-A sixty dollar release built with a budget large enough to feed whole continents, it’s clear that something has gone horribly wrong. Rating: 3.5 out of 10

Disclosures: This game is developed by Bungie and published by Activision. It is currently available on PS4, XBO and PC. This copy of the game was obtained via paid download and reviewed on the PS4. Approximately 50 hours of play were devoted to the single-player mode, and the game was completed, and with the raid seen through to completion. The game is constantly online, and time was spent both going it alone and with groups of other players.

Parents: According to the ESRB, this game is rated Teen and contains Blood, Language and Violence. I find it hard to believe that anyone would be overly affected by anything on display here. The occasional head pops off from targeted monsters, but it’s all very, very cartoonishly portrayed.

Deaf & Hard of Hearing Gamers: There’s no doubt that the inability to hear will affect gameplay. Beyond the standard situational awareness from audio cues, many modes also require the ability to communicate over voice chat in order to be effective – calling out weak spots that other players can’t see, for example. The game also offers full subtitle support but I woud say that players with hearing issues will be at a clear disadvantage.

Remappable Controls: Certain functions are remappable. There are many control options and the ability to mirror their placement, but they can’t be freely allocated.

Colorblind Modes: There are numerous color options available in the accessibility menu.

Well done Darren. Agree with score too.
Activision deserves just as much returned contempt from gamers as much as Bungie deserves.

I actually held this review back so that I could have a clear view of where the game was headed with its updates – after all, Destiny 1 enjoyed a pretty noticeable resurgence with the Taken King expansion fixing many of its worst issues, and I wondered how they’d go about improving Destiny 2 over its base release given the Osiris expansion was so close to the launch date.

Turns out they made it worse instead, and intentionally screwed over their player base in the process. Ah well!

Reviews as a live “ service” can backfire on a bad game too when the live game gets way worse. But, generally speaking it’s too late then from the Publisher/ Developers point of view, since the money has been made. In this case less so, since the ongoing game treatment and PR from Bungie has been garbage all round. Notice Activisions silence on all this ? They as “partners” will pay for game promotion, but won’t lift a finger for damage control. A money saving tactic hoping that the anger will simmer, but the Awful Bungie arn’t accomodating. Thanks for… Read more »