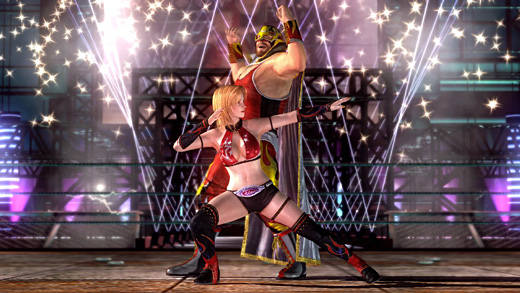 HIGH Landing a well-timed Power Blow that destroys the opponent—not to mention everyone and everything around them.

WTF Virtua Fighter characters made it into the series before Rachel and Momiji did? Seriously?

That's what Dead or Alive 5

has been promoted as, with its PR department perhaps understanding that it's never been taken seriously by the hardcore. It's still provided a lot of enjoyment for those not interested in frame counting, though. With the current Team Ninja hot off the back of the criminally underwhelming Ninja Gaiden 3 and no Tomonobu Itagaki to lead development, can the current iteration of Dead or Alive do the series justice?

The answer on this occasion is a resounding "yes," so let's get right to it—How's the fighting?

Much the same as it's always been—One punch, one kick, and one guard button that functions as a counter when paired with a direction. Strikes beat out throws, holds beat out strikes and throws beat out holds—for the most part, anyway. Fights often progress at a rapid pace, with spacing, juggles and an awareness of the environment all required for success.

So what's new? Two fresh faces enter the fray—Mila, a predictably good-looking MMA hopeful with a disturbing level of fandom towards series stalwarts Bass Armstrong and his daughter Tina, and the Taekwondo-wielding amnesiac Rig. He works on an oil rig as a roustabout. The other workers found him there. They actually went and named him "Rig," the evil bastards. (Seriously.) 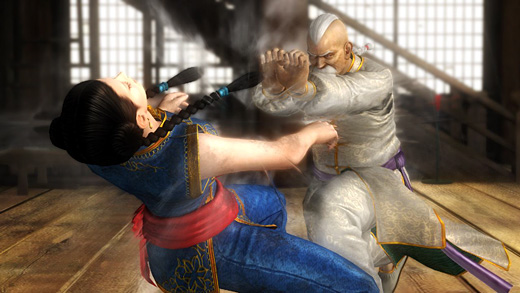 Also coming along for the ride are three unlockable Virtua Fighter characters—Akira, Sarah and Pai. They fit in surprisingly well, no doubt due to the similarity in the base fighting engine of both games. It offers an exciting glimpse at a potential crossover, though chances of this ever happening on the scale players would want are probably quite slim.

As cool as the two new additions and Virtua Fighter characters are, however, it's slightly disappointing that there aren't more new entries in the lineup—a disappointment compounded by several characters missing in action, such as Karate master Ein and the spine-snappingly vicious Leon. Even worse, the wonderful Rachel and Momiji from Tecmo's own Ninja Gaiden series still haven't made it into Dead or Alive, even though three characters from another company's intellectual property snuck in before them. Their absence is truly baffling.

Apart from characters, there are also new additions to the gameplay—power blows and critical bursts. Power blows are essentially desperation techniques whereby dropping below 50% health allows for one use of a charged attack which will seriously ruin the opponent's day. Critical bursts are combination attacks which will leave the opponent unable to counter after impact, leading to a free combo without the threat of interruption. They both fit in fairly well, though some characters have a notably easier time dealing out critical bursts than others.

Dead or Alive 5 is also more balanced than past versions, given the efforts of Yohei Shimbori's desire to appeal to the core fighting game community. That said, it still stumbles in comparison to, say, Virtua Fighter 5: Final Showdown.

The problem is that this series just doesn't know what to do with grapplers. Tina's fine against a defensive opponent, but the moment she's up against a hyperactive Ayane tumbling around the arena like she's stuck in a dryer with no idea of what the block button does, her overall lack of speed at close range becomes a major disadvantage. There's little point being great with throws if the chance to actually throw the opponent never comes up. Also, characters with high stun potential and great mix ups, like Kokoro, have a decidedly easier time dominating opponents. 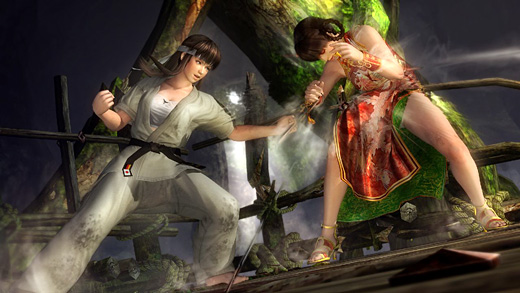 Graphically the game's impressive, and the character models are arguably the best in the business. Fighters grow visibly sweaty and accrue dirt all over their fancy clothes as fights draw to a close, though the most impressive aspect isn't the fighters themselves—certain stages contain incredible sequences such as knocking helicopters out of the air with the opponent, or causing a skyscraper under construction to tilt over and crash into the streets after a nearby crane goes haywire. It's some genuinely impressive stuff. Sadly, there aren't a great many of these moments to be found. It's a shame that Team Ninja didn't have more confidence in them, as they tend to be spectacular in motion.

(Okay, so hundreds of people die every time a skyscraper topples onto nearby pedestrians or a train is derailed—so bloody what? It's an awesome effect, and the screams of the horrified victims in the background only add to the immense satisfaction of it all.)

Story mode is a mixed bag. Continuing the format introduced in Dead or Alive Dimensions, players take control of most of the cast as they journey through the latest tournament in which they smack each other in the face until their opponent falls over unconscious. Individual chapters range from the hilarious to more pointless sections like… well, sadly too many of them are little more than filler. Tina's section is great however, making her relationship with her father Bass seem genuinely touching and cute as opposed to pretty damned creepy like it did in previous games.

All that's well and good, but how's the backbone of any modern fighter, the online, hold up? Well… it's okay. Pretty much. A recent patch smoothed out most of the problems, but it's still very dependent on connection quality, and losing because of input lag is a pain in the rear. With a quality connection, matches can be almost perfect. Without one, they're an exercise in irritation..

's a very good game, but one that also seems slightly confused in its intentions—the neat new mechanics and impressive environmental interactions seem to be butting heads with Team Ninja's desire to make it a more competitive fighter—and by extension, a more traditional one. That said, it's still the best game in the series and incredibly enjoyable, regardless of whether or not it'll finally appease the hardcore fighting gamers out there. Rating: 8.0 out of 10.


Disclosures: The game was obtained via retail for the Xbox 360 and 90 hours have been spent to date on it, flitting between online and offline modes. All unlockables were unlocked, all challenges overcome and a good time was had by all. Me.

Parents: According to the ESRB, this game contains partial nudity, sexual themes and violence. It's an M rated game, though there's little to justify that rating aside from some pretty skimpy clothing for the women and gravity defying breast physics. If that sort of thing is SHOCKING AND WRONG as opposed to silly and arou… amusing, best keep them away.

Deaf and Hard of Hearing: Shouldn't be a problem here. Subtitles are readily available for story mode and winning / intro quotes, and with the possible exception of battle yells telegraphing certain attacks a little earlier, their absence shouldn't cause any issues.