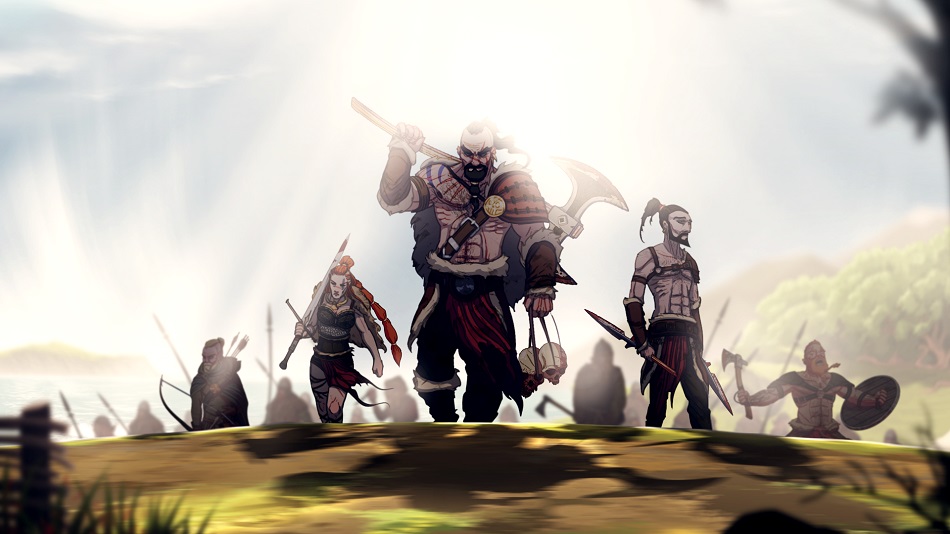 HIGH Those backgrounds are absolutely lovely.

WTF I’m pretty sure the entire aging process for a sheep should take longer than a week.

Dead in Vinland focuses on the story of Eirik and his Viking family doing their damndest to survive after escaping from an attempt on their lives. They sail off into the unknown to leave their assailants behind before washing up on an mysterious island. They set up camp with some rudimentary survival tools, so everything’s looking reasonably promising – right up until a local warlord shows up on their doorstep and beats the bloody hell out of them, promising to finish them all off unless they start paying tribute.

Thus begins their fight for survival, eking out a living on a hostile island stuffed full of things trying to kill them. Fortunately, they’re all pretty handy in a fight and know how to work the land. So, a bit of hard graft, some forward thinking and the occasional enemy corpse (or twenty) might just get them through it alive.

After starting, players are dropped into the (mostly) menu driven world of Dead in Vinland, clicking their way from crisis to crisis. The family’s shabby new home is shown on screen, and it’s up to users to cast a keen eye over the place and prioritize what needs to be done in order to make surviving more than a pipe dream. In fact, the game’s main attraction will likely be this base building element. As the family has essentially set up in an abandoned hovel, a fair amount of work is required to make it suitable for habitation and to provide the stat boosts and resources to make survival possible. For example, creating more rain barrels leads to larger reserves of water, improving the forge will decrease manufacturing times, and arranging a farm will allow sheep to be reared for milk and meat.

It’s also important to manage the status and relationships of the refugees that can be brought home. At one point, one of the less socially-minded gentlemen in my lineup was getting drunk and occasionally punching others in the face, which led to demands that I exile the bugger and his freewheeling fists. Did I acquiesce to these admittedly reasonable requests? Hell no, since he could chop wood like an absolute machine. 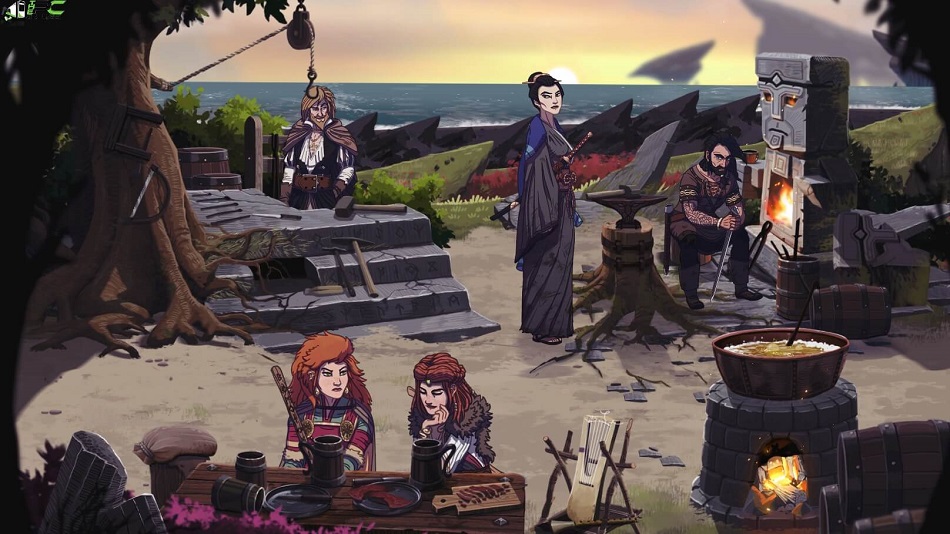 None of this seems like a bad setup from the outset, but before long some repetition starts edging into the proceedings. Characters have to be swapped in and out of jobs frequently to either improve their productivity at certain tasks, or to allow them to rest or help their comrades. At the end of the day, water and food has to be manually allocated to the family and any allies they take on board.

It’s a minor quibble at first, but before long this level of micromanagement becomes a persistent irritation since lots of time is wasted on petty tasks that aren’t interesting. Someone gets tired? Send them to bed. They’re feeling better? Drag them back to whatever drudgery they were working on. It feels like overseeing a bunch of mindless toddlers who will literally drop dead from exhaustion before showing any initiative. If their depression, hunger, fatigue or sickness reaches 100%, they’ll just keel over and die, and if it happens to one of the original four family members… well, that’s no bueno and the game is over.

The other big annoyance is that nearly everything in the game comes down to what is essentially a dice roll. A character can never be so skilled that they accomplish a task without fail – it tops out at a 95% success chance.  It may be a personality flaw of mine, but I don’t consider failing a status check with those odds to be a rip-roaring time, and Dead in Vinland positively revels in failed rolls –  it’s maddening to fail when the game’s telling me I’ve got a 92% chance of doing it right.

Even when there aren’t hard numbers to gamble on, there are still variables to contend with. Chopping wood might gain 5-11 pieces of lumber per session, and mining may (or may not) produce iron as well as stone. This randomness makes it hard to deal with tribute day when the warlord comes around demanding materials that there may be no possible way of obtaining in time. At least the campaign doesn’t end early on failed tributes — they just send over some thugs to smack someone around or set fire to the place, at least for the first few. 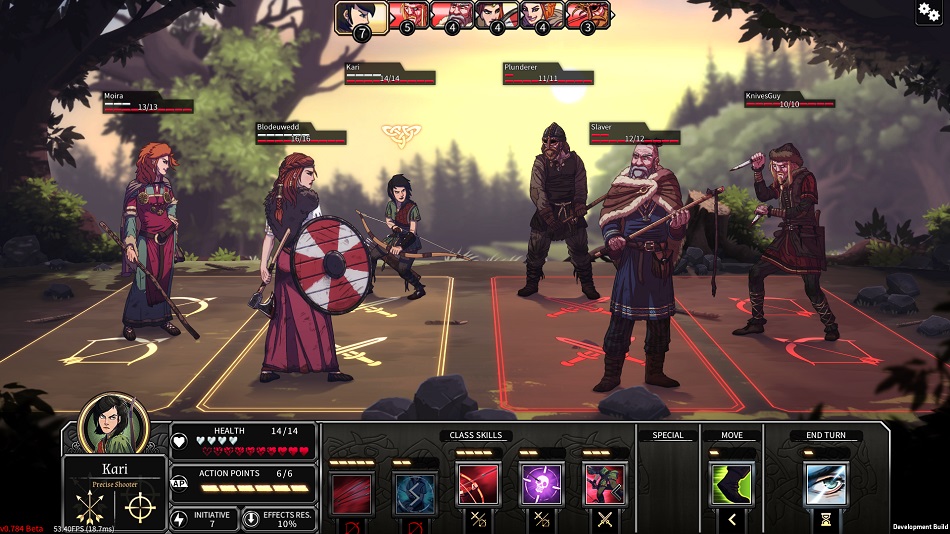 Then there’s the combat, which looks a little like the 2D, turn-based fights in Darkest Dungeon – allies and enemies attack from certain rows on the battlefield designated as ranged or melee spots, and players then choose from a catalog of skills to attack. Sadly, it’s just as drawn out as the management aspects of the game are — It’s outright boring to be swinging wildly at enemies and constantly missing, failing to apply intended debuffs, or doing pitiful-to-no damage on successful attacks. Allies can’t even be permanently improved since they have to use time-limited items from the forge instead. A few in-game days pass after a fight, said item expires and they’re right back to square one.

One of the few positives I took from the experience was that the exploration of the island occasionally reveals some interesting scenarios. It’s nice to unexpectedly find additional resources tucked away in a bush, or potential allies chilling in a nearby forest. I even wandered into an active volcano at one point and somehow made it back out alive – a small aside in the larger scheme of things, but it helped break up the monotony.

Special mention goes to the English translation, which is weirdly inconsistent. Sometimes it flows naturally, then spikes suddenly into memes and ‘LOL, GOTCHA’ sketches that are far more reminiscent of an unmoderated online message board than anything that would occur in the Viking age. There’s plenty of entertaining banter throughout, but the juxtaposition with weird nonsense is jarring.

Oh, and just to hammer some final nails into the coffin, the final stretch of the campaign apparently overwrote what some of my earlier actions were, resulting in an epilogue completely unrepresentative of the various choices I had made throughout. There was even an obvious Assassin’s Creed reference thrown in for no reason whatsoever!

It should be quite obvious by this point that I didn’t care for Dead in Vinland. The setup’s decent, and early on I thought I’d enjoy my time spent starving, dehydrated and constantly getting attacked by murderous brigands on a desolate island. Alas, it takes an experience that could have been an acceptable eight-hour journey and stretches it out to over fifty (or more!) and becomes an absolute chore by the time players finally wrap it up. Rating: 3 out of 10

Disclosures: This game is developed by CCCP and published by Playdius/Plug in Digital. It is currently available on PC, Mac, Android and iOS. This copy of the game was obtained via publisher and reviewed on the PC. Approximately 50 hours of play were devoted to the single-player mode, and the game was completed. There are no multiplayer modes.

Parents: It has no ESRB rating. It’s also not for kids, with some pretty savage swearing chucked in and plenty of dialogue featuring more, ahem, ‘adult’ concerns. 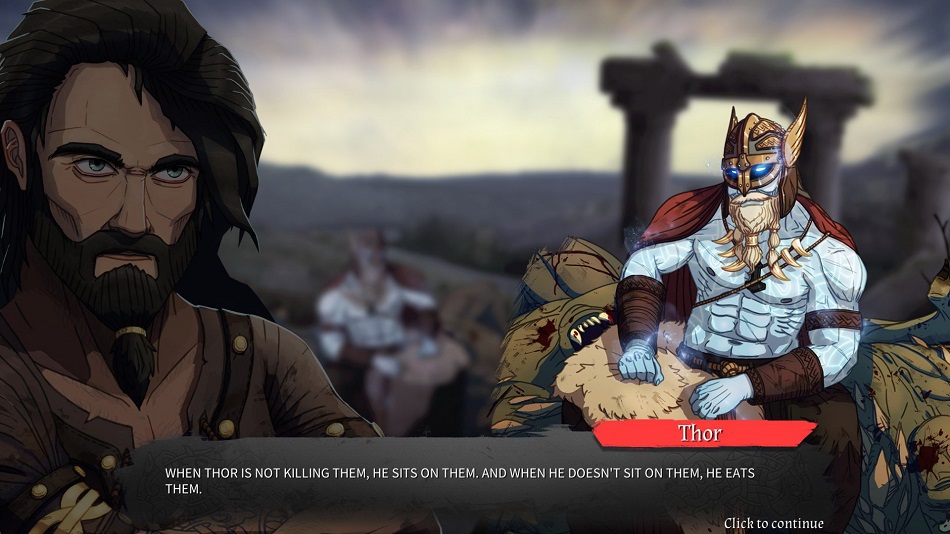 Remappable Controls: No, this game’s controls are not remappable. Pointing and clicking is the order of the day – it was clearly designed with the touch screen of mobile devices such as an ipad in mind. 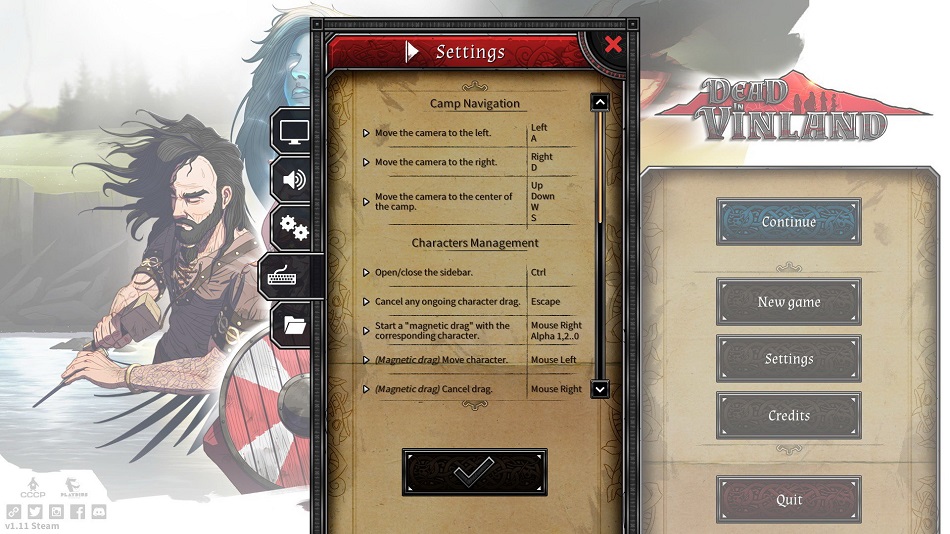 I disagree… this is one of the best games I’ve played and if you love strategy resource management you’ll love it. The roll checks are often forgiving in that you can just reroll right after a failed check. And you left out two major elements of the game … the relationships and the STORY!