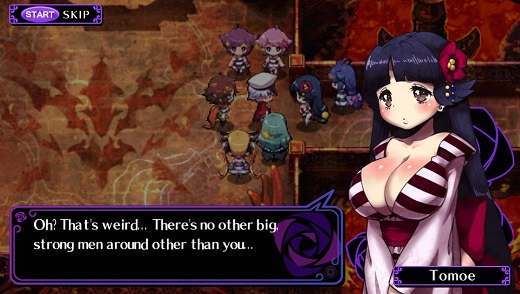 LOW Backtracking, and lots of it in the second half.

WTF A third of the game (or more!) is hidden behind false endings and a cryptic unlock code.

I didn't know what Criminal Girls: Invite Only was before starting it, other than the fact that it has a truly awesome name. Turns out that it's an enhanced and localized port of an older PSP title that was never released in the West. It's probably not too surprising given that it is, at heart, a touching tale of young girls learning about life and love while only occasionally getting whipped or zapped with a stun gun for good measure.

The story goes that the main character is sucked down into Hell so that he can shepherd a bunch of sinful, rebellious and prematurely-deceased young girls back into the world of the living as they journey towards eventual redemption. Strangely, they haven't committed any significant crimes yet (although they were allegedly on the road to doing so before kicking the bucket) so the whole game can best be described as Minority Report meets The Shawshank Redemption, only set in Hell with a mainly female cast.

Of course, it could be argued that this approach is moderately reprehensible on the grounds that it's completely monstrous, so there's no actual lash-on-flesh antics or grievous bodily harm to be found here. Instead, the ‘temptations' (represented by cartoony doodads) are viciously thrashed out of the girls through use of the Vita's touch screen and rear panels. Smack these enough and… boom! The criminal in question learns a valuable lesson and is then able to use powerful new moves during combat. Just like in real life.

It should be pointed out that there's some minor censorship in the Western release, which is so mindblowingly pointless as to be unintentionally hilarious. I can only wonder how many people are going to think 'Gee, I'm enjoying this part where I dress a reluctant young lady up in a cow costume and zap her backside with a cattle prod, but thank Christ there's a wafer thin layer of nearly transparent fog there or I'd probably feel pretty awkward about the whole thing.' Sure, an uncensored version might draw bouts of apoplexy from the easily enraged, but the content is too silly and juvenile for any functional human being to get worked up over it. 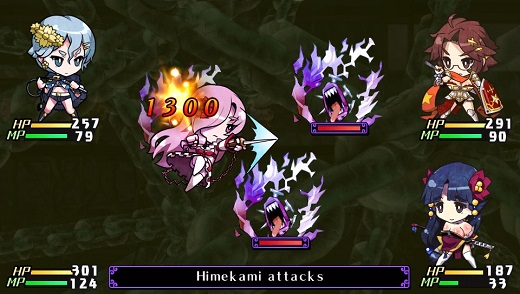 Once it's time for battle, the new attacks learned via punishment can be implemented into the overall gameplan—but not at will. Oddly, players can't choose their strongest attacks whenever they feel like doing so. Instead, the girls will let the player know of their favoured approach, which may include punching bad guys in the face or encasing them in a tomb of ice.

Fortunately, there's usually at least one option which will deal with the situation appropriately—for instance, if an enemy is powering up for a particularly nasty manoeuver, Ran is almost certain to offer to block. Tomoe might wipe out a group of enemies before they can even move, or Kisaragi might suggest pinching valuable items off them.

Characters can also be rotated in and out during each fight to ensure that the party is never caught short, and one recovery or support item per round can be spent to keep the party ticking over. It leads to a clever, intelligent battle system where the only real downfall is when the felonious minxes all offer to do the same useless thing at the same time, such as unleashing physical attacks on physically-resilient enemies. Why a tiny mage would ever suggest that she wants to break her knuckles on a heavily armoured hellspawn is beyond me, but hey.

Happily, things that could otherwise be annoying as hell (such as being forced to grind out levels) are always smoothed out by player-friendly design. For example, Sako learns an ability called 'Shout' which initiates battles instantly. Rather than roaming around like a bunch of pillocks, the party can camp out at a rest point and slaughter groups of enemies, while healing and refreshing mana points as needed. Later on, other characters learn how to remove random encounters during exploration, or how to improve the experience or currency gained from battles. It's all greatly appreciated.

Something that's not so happy? The visuals. As mentioned earlier, it's essentially an updated PSP game with a few graphical enhancements made. It's in an acceptable resolution and the minigames have been granted animated models appearing appropriately worried about their situation, but for the most part it looks pretty old-school. It's not an ugly game, just one that could have benefitted from a few more dollars thrown at the presentation.

Despite the dated graphics, Criminal Girls: Invite Only manages to impress as an entirely competent retro dungeon crawler. It does run out of steam before the end with some amazingly pointless backtracking and a storyline that devolves into a typical harem snoozefest, but the overall experience? Still worth it, overall. Rating: 7.5 out of 10.


Disclosures: This game was obtained via publisher and reviewed on the Playstation Vita. Approximately 45 hours of play was devoted to single-player modes (completed 1 time, with the additional true ending achieved afterwards) and there are no multiplayer modes.

Parents: According to the ESRB, this game contains fantasy violence, language, partial nudity and sexual themes. They're completely right, as the game does indeed involve all of those things! The rest of the content is pretty mild, it's just the pervy stuff that earns Criminal Girls its rating.

Deaf & Hard of Hearing: Speech is in Japanese, so everything's subtitled to suit. I can't see there being any issues here at all.