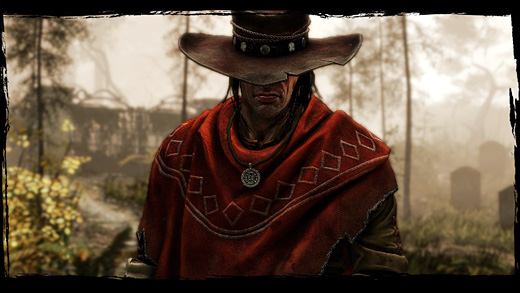 HIGH Getting a high combo streak and topping it off by swerving out of the path of an otherwise fatal gunshot.

LOW The dueling is standard fare, and not much fun.

WTF According to Silas, he's crossed paths with nearly every notable figure from that time period.

is the first game in the Juarez series that doesn't feature the McCalls or their descendants. Instead it puts players into the boots of an all-new aging bounty hunter named Silas Greaves, a man whose exploits in bringing down targets have made him a living legend featured in dime novels the country over.

Recognized by a fan one day whilst stopping off at a local saloon, he takes the opportunity to set the record straight on his various adventures—it's the setup that leads to Gunslinger playing out in tandem with his storytelling skills.

It turns out that Silas isn't necessarily the most reliable narrator. He's not above forgetting an important detail or two, embellishing wildly during certain events, or—in a move that would undoubtedly fill Peter Moleneux's heart with glee—simply lying outright if his audience's attention is slipping. He'll spin tall tales for the player to gun their way through, only to recount the same story as it actually happened moments later if established facts don't quite add up.

For example, at one point he'll tell of a fictional all-out assault on a mineshaft that eventually leads to his (and the player's) death, only to then mention that it would have been a monumentally stupid thing to attempt. The game rewinds as he revises his tale and a secondary path pops into view, allowing for a less-suicidal attack which won't culminate in the player getting splattered by a minecart.

What could have ended up as a cheap excuse to lengthen the playtime artificially is intelligently utilized in a manner that helps keep things entertaining throughout. For someone who's killed hundreds of people—or at least claims to have—Silas is a pretty likeable protagonist, bantering with his audience as he spins wild yarns of rubbing shoulders with the most famous characters of the time period. By the end he'll have interacted with the likes of Billy the Kid, Butch Cassidy and the Sundance Kid and Jesse James to name but a few.

Of course, a neat storyline doesn't mean much if the gameplay isn't there to back it up. Fortunately, Gunslinger delivers admirably on that front with solid action all-around. For instance, the guns don't feel like peashooters—they're loud, recoil violently and offer satisfying destruction when unleashed against soft fleshlings stupid enough to get in the way.

Speaking of stupid fleshlings, the enemies in Gunslinger aren't the brightest out there—it's very much an arcade style romp, so the legions of goons exist simply to provide a fun shooting gallery where twitch reflexes and careful aim will carry the day. Sure, the desperadoes will take cover and occasionally move to another vantage point, but they tend to be predictable in their actions. Fortunately, it fits the pacing of the game just fine. QTE events also transpire from time to time, but they're snappy and mainly used to whittle down enemy forces before engaging.

As Silas journeys throughout the many tales of his life, new skills can be unlocked through the use of an experience system, with points doled out as he kills off enemies or discovers secret "Nuggets of Truth" scattered throughout the levels. Also, when an enemy fires what should be a lethal shot, a filled survival gauge will allow the player to dodge out of the way as the world slows down into bullet time. It's a neat mechanic, and hearing some of the enemy reactions to witnessing a man literally move faster than their bullets is often both amusing and gratifying.

Occasionally the storyline will call for showdowns with bosses, which either play out in the standard first-person shooter (FPS) gameplay fashion or cut away to a dueling minigame. As far as the dueling goes, it's up there with the best of them—which is to say that it's not really very good. Keep the enemy in focus, make sure Silas's hand is close to his holster at all times and react when the enemy draws. It's the same boring setup that's in every other Western, and while there's nothing exactly wrong with it, it's far from the most interesting part of the game.

The Call of Juarez series has had its ups and downs over the years, but Gunslinger

stands proud—not only against its own checkered past, but against the FPS genre as a whole. It may not be a subtle or particularly nuanced experience, but it's certainly a cracking good time delivered with a style and confidence that's rarely seen in a full-priced title, let alone a $15 download. Rating: 8.0 out of 10.


Disclosures: This game was obtained via paid download and reviewed on the PC. Approximately 10 hours of play were devoted to the single-player mode, and the game was completed. There are no multiplayer modes.

Parents: According to the ESRB, this game contains intense violence, blood and gore, suggestive themes and strong language. I'd have to argue that they're being a little harsh on it. It's all about shooting enemies, yes, but the stylized manner and arcadeish feel to it all definitely softens the inherent violence of gunning down countless foes.

Deaf & Hard of Hearing: Subtitles are available for both the cut-scenes and narration throughout levels. The usual contextual subtleties as to the location of enemies will be lost, but for the most part the game is entirely playable.