Boots Nailed To The Ground 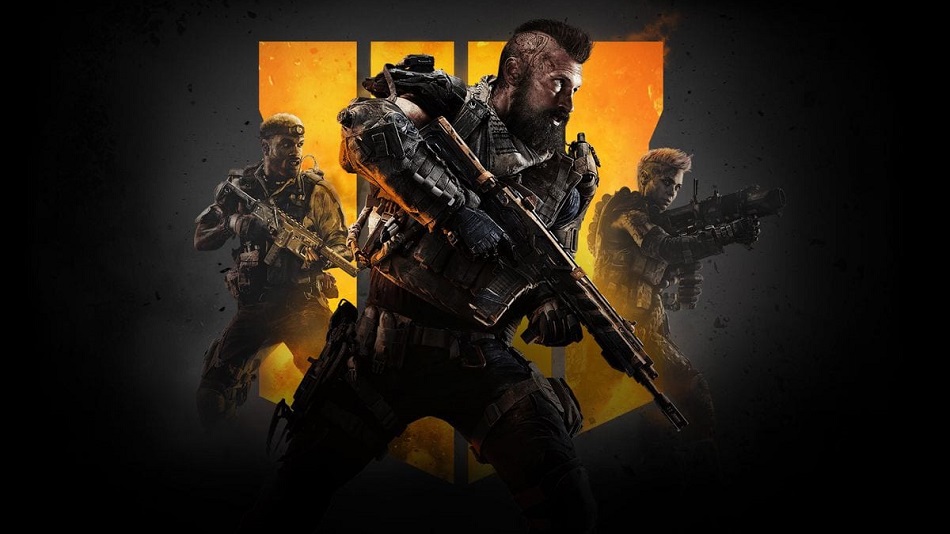 WTF I’ve no idea what they were aiming for with Frank Woods’ dialogue.

For a while now, it’s been an unproven assumption that online first-person shooters live and die by their multiplayer options, and that no one comes to them for the singleplayer narrative. So, In a much-publicized move, the Black Ops 4 team has decided to test this theory by removing the campaign and replacing it with a training mode in which series regular (and world’s most obnoxious man) Frank Woods acts like a complete imbecile as players come to grips with the controls – a task which would be significantly less aggravating without Woods screaming puerile bullshit serving as the introductory tutorial. We’re not just learning how to use a flamethrower – we’re teaching ourselves to roast those motherfuckers into a three course meal or whatever garbage he spews instead, yo!

There are three main multiplayer choices – the classic Call of Duty multiplayer including modes like Team Deathmatch or Kill Confirmed, the long running Zombies mode where players have to survive an undead onslaught for as long as they can, and the new Blackout mode — it’s Call of Duty‘s take on the inexplicably popular Battle Royale genre.

Let’s talk about Blackout first. The core premise is that up to a hundred players head into each game either solo or grouped up, launch themselves out of a helicopter and parachute into a huge map littered with supplies and buildings to hide in. Everyone has a single life with no respawns, so death means getting shunted back to the lobby. That said, downed players on a team can be revived if not finished off, and dead players can choose to spectate. Stopping players from camping for the next ten hours is a circle of death that closes in on everyone periodically, so most players will at least move when forced to. 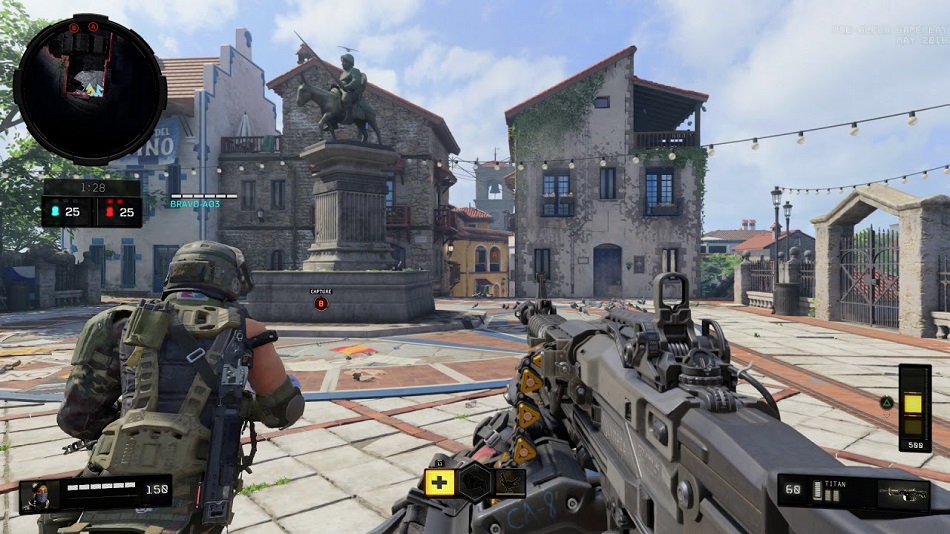 It’s fair to say that I’m not keen on this genre as a whole given that I’d much rather get stuck into firefights. I find the downtime associated with Battle Royale matches soulcrushingly boring, but I will say that Blackout’s probably the best of the lot. Given CoD‘s legacy as a shooter, the gunplay feels more satisfying than PUBG or Fortnite — it’s punchier and more intense, and there are no loathsome building mechanics stinking the place up. The vehicles are fine, the loot is plentiful, and it’s a slightly better Battle Royale experience than most.

The second of the three game types, the ever-popular Zombies mode, has up to four players slaughtering the undead in a bid to survive for as long as possible. Killing enemies nets points that can be used to open up new areas in each map, or to purchase guns and assorted powerups from vendors. This simple loop continues until the horde finally overcomes the warm, fleshy humans.

There’s a standalone story behind this mode but it’s fairly throwaway and filled with cheesy, overwrought dialogue, so we’ll ignore that and talk about the enemies instead — they’re zombies. The normal zombies shuffle around trying to kill players, but are only a threat when grouped up in huge numbers. There are also larger enemies that take much more damage before dying, and special enemies (zombie tigers!) to spice things up alongside a bunch of map-specific traps and such.

Honestly, this mode’s alright in small doses. It doesn’t have the hooks to keep me coming back for more, but it works as intended and provides a ton of slaughter in a short amount of time. There are already several maps available at launch, and it’s possible to opt for a ‘rush’ mode without the slower escalation of the main version, so… yeah, it’s okay. Not my thing, admittedly, but it’s a decent showing for fans of zombie slaughter, even if it is a little too one-note to maintain my interest. 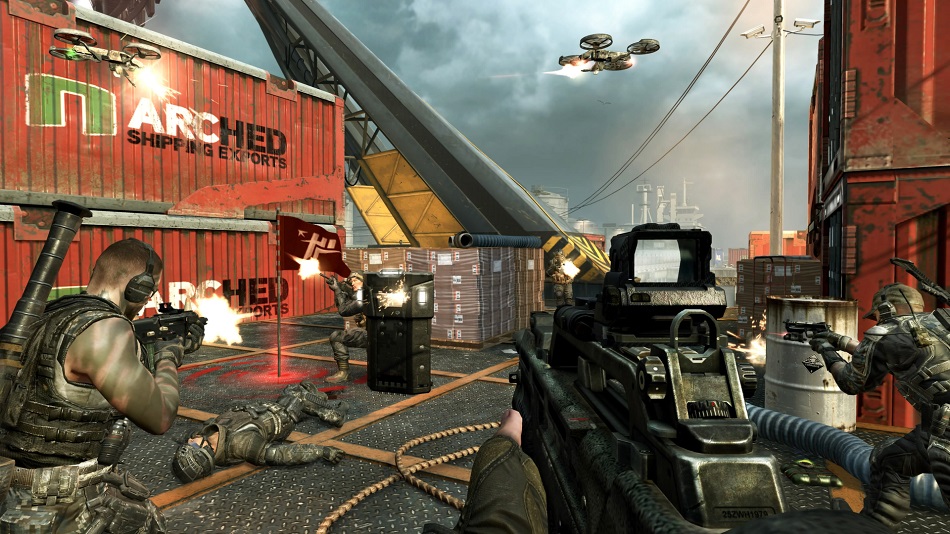 Then, of course, there’s the mode which shot Call of Duty into the big leagues — the now-classic multiplayer. They’ve removed the wallrunning and aerial jumping from recent Black Ops titles, which is kind of a shame but their implementation always felt tacked-on and lacked fluidity anyway, so it’s not as huge a loss as it could have been.

With those Titanfall-inspired moves gone, this mode feels much the same as in past titles – a feeling bolstered by the disturbing amount of recycled maps popping up during matchmaking. Players select from a group of available classes (here called specialists) with their own unique loadout. For example, Torque is defensive and armed with barricades and razor wire, while the lunatic Firebreak walks around with nuclear cores to roast nearby opponents, damaging them and removing their ability to self heal. Oh, that’s the other new thing added into the mix – players choose when to heal by using a syringe that’s on a short timer. The rest of it, namely killing enemies, capturing points and confirming kills by collecting medals from downed enemies… it’s all still here.

Honestly, I had a mediocre time with this mode. Partly because I’m awful at it, but a larger part is due to the haphazard pacing, the lack of mobility options, the surprising amount of campers, the bunny hoppers, frequently one-sided killstreak bonuses, recycled maps, spawn-killing and other issues that just kicked the legs out from under the experience. Of course, times like these are when I’d retreat into the campaign when this sort of multiplayer nonsense became too much to handle, but that’s gone now, so…

I spent a lot of time in Call of Duty: Black Ops 4 waiting for it to click with me so I could see why so many players come back year after year, and it never did. It never even came close. It’s not that I can’t respect it — it seems to offer decent value in that it’s essentially three different types of shooter in one package, but aside from the new Blackout mode, I’ve had significantly better experiences from many of its competitors. And honestly, Blackout’s main competition is a free-to-play game. It may be better than Fortnite in my opinion, but sixty dollars better? I’m not entirely convinced about that, and without a decent singleplayer campaign attached, it’s a pretty hard sell for anyone who isn’t already a fan. Rating: 5 out of 10

Disclosures: This game is developed by Treyarch and published by Activision. It is currently available on PS4, Xbox One and PC. This copy of the game was obtained via publisher and reviewed on the PS4 Pro. Approximately 18 hours of play were spent in multiplayer modes. There are no significant single player options.

Parents: According to the ESRB, this game is rated M and contains Blood and Gore, Drug Reference, Intense Violence and Strong Language. People get blown up in-game or have their jaws shot open in the brief cutscenes, so while most of the game’s pretty tame, it does have aspects that aren’t for kids, not to mention that James Woods is pretty much the worst role model they could have.

Colorblind Modes: There are colorblind modes available in the options, with several options to choose from.

Deaf & Hard of Hearing Gamers: Situational awareness through audio is a key part of playing Black Ops IIII effectively. There are some subtitles available and numerous on screen prompts to try and help out, but it’s not enough. Anyone unable to hear things around them is at a steep disadvantage, no doubt about it. 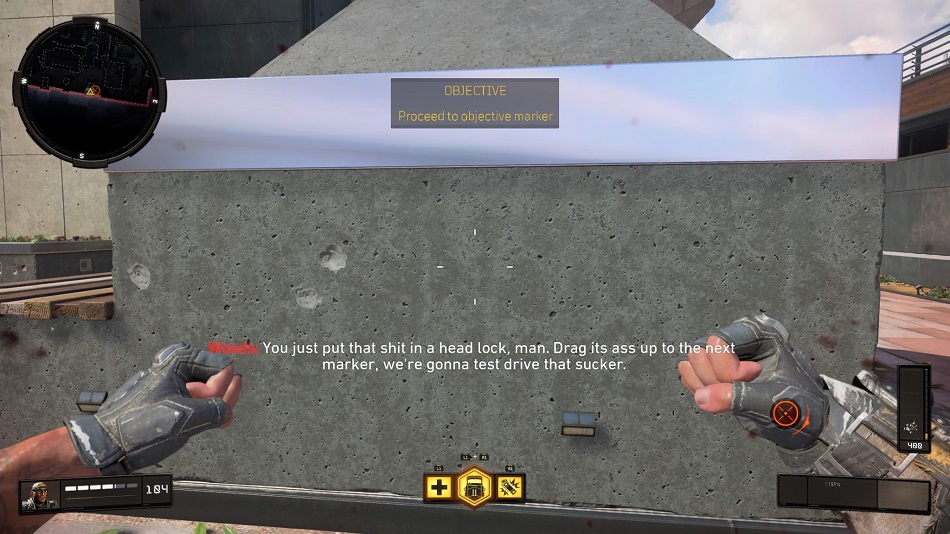 Remappable Controls: Certain functions are remappable. There are plenty of presets to choose from, but they can’t be freely reassigned. 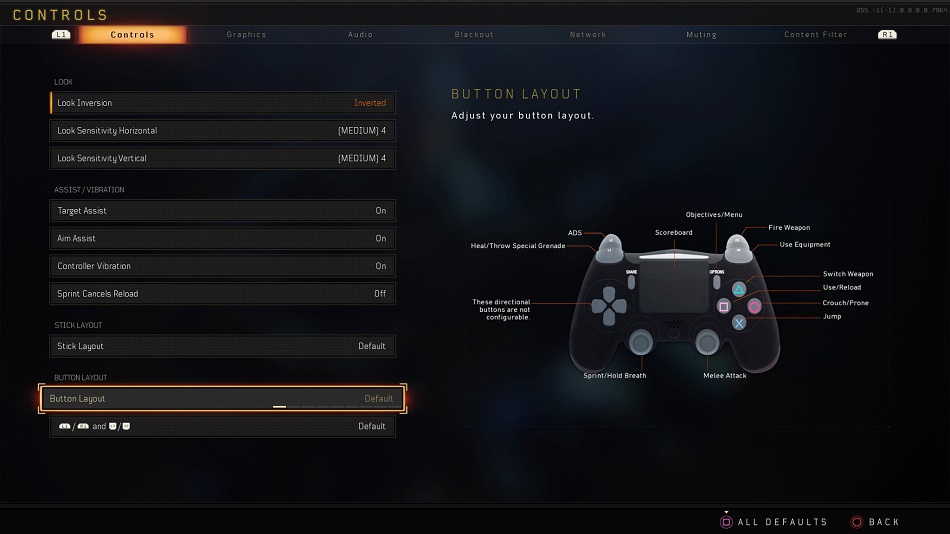 Seems expensive to buy at this price