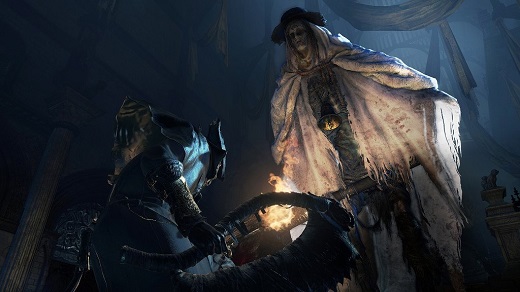 HIGH Charging up an axe attack that stuns large dudes so I can rip their innards out. Neat!

LOW The Chalice Dungeons look and feel almost identical no matter which variations are triggered.

WTF The 'real' ending. Who thought that would be a satisfying conclusion to a forty-plus hour adventure?

Bloodborne primarily takes place in the Victorian-era City of Yharnam on the eve of a 'Hunt'—an event which draws Hunters to the city with the aim of chopping any inhabitant afflicted by some strange curse into chunks.

I think? It's not entirely clear to me, even multiple playthroughs later. That shouldn't be a surprise given that it's a From Software game helmed by Hidetaka Miyazaki, and a natural follow up to the wildly successful 'Souls' series of adventure games.

The core rules have changed. Combat is faster than ever, with shields dropped almost entirely from the formula and replaced with more modern accompaniments—shotguns, pistols and the occasional flamethrower. Most of these are essentially useless as damage dealers, and are instead used to interrupt, parry or goad enemies into attacking. As such, melee-based savagery is still the order of the day when it comes to wiping out enemies.

To help sustain this more aggressive approach to combat, there's now a rallying system where significant chunks of lost health can be recovered by going back in and hacking away at foes rather than backing up and popping a healing item. I'm not saying it adds up to a better combat system than the core Souls series since the nervous tension of deflecting blows off a shield as stamina drains is missing entirely, but it's damn good, and provides a notably new experience for returning players.

Also new is the inclusion of transforming implements, known as Trick Weapons. These have various forms and functions, such as snapping open to increase their attack range, or shortening down to allow for rapid face-chopping. There's a decent variety on offer from massive, unrealistically huge hammers with detachable swords, to canes with a bladed whip hiding inside. These forms can be fluidly swapped mid-fight, though longer, slower attacks only work on AI opponents. Attempting heavy attacks on humans will generally result in getting creamed, which limits combat options somewhat. Still, they look awesome and feel satisfying to wield.

When a good combat encounter with these elements in place happens, Bloodborne absolutely shines. Dashing between enemies while flailing away, avoiding musket blasts that narrowly whip past, charging up an axe spin that splatters a group of enemies in one shot… Man, it's good stuff.

However, despite the push for faster action in Bloodborne, playing it smart and assessing situations before leaping in is still the key to victory, just as it was in Souls. The game has a nasty fondness for large groups of enemies, and getting hammered by a mob all at once is always going to hurt, usually in quite a fatal manner.

So what are the downsides of this ghastly adventure? Well, loading times upon release were absurd, but they've been recently patched to be shorter. On the other hand, having to travel to the Hunter's Dream and back again in order to level up, visit the shop or enhance any equipment is still a waste of time. Most players will require frequent supply runs at the beginning now that there's no Estus equivalent of replenishing healing items, and that means more back-and-forthing instead of just playing.

An issue larger than my annoyance with making too many stops is that there's simply less to discover than in the Souls series. NPCs generally have less to their sidequests, many areas feel more linear, and character builds have been overly-streamlined—by the end of my first run there was nothing I wanted to modify in my character, unlike traditional Souls titles where trying out magical or faith-based builds was a good incentive to replay.

Looking at the environments, they're usually awesome to behold in an artistic sense, yet they're a touch too similar for the most part. From the start of the game it takes a long time for the everything-is-grey Victorian Gothic to bleed out into something new, and the Chalice Dungeons are about as visually dull as a thing can be. It's shameful, given the artistic talent on display throughout the rest of the game.

As a fan of Souls who was burnt by the relentless, unflinching mediocrity of Dark Souls 2, I wasn't sure what to expect from Bloodborne, and my expectations going in were severely and firmly reined in. Turns out there was little to be concerned about—a few questionable deviations from tradition aside, From Software have once again produced an excellent adventure which can easily be recommended to newcomers and veterans alike, though the differences that newcomers may find rewarding might be a bit of a turn-off to veterans. As for me? I loved it. Bring on the next hunt. Rating: 8.0 out of 10


Disclosures: This game was obtained via digital download and reviewed on the Playstation 4. Approximately 85 hours of play was devoted to single-player modes (completed 3 times, platinum achieved) and online was enabled at all times.

Parents: According to the ESRB, this game contains blood, gore and violence. And corpses. Mounds of corpses, and umbilical cords and all sorts of non-child friendly imagery.

Deaf & Hard of Hearing: There's a ton of ambient sound that needs to be processed in order to react fully to the environment—screams, cries and the cracks of muskets are only a few of the things that precede incoming attacks, and without them reacting would be very difficult indeed.

Yep, it’s a reasonably common JRPG trait that’s not exclusive to Bloodborne’s Chalices where they start throwing in excessively repetitive environments during the post-game bonus dungeons. I’ve very rarely liked any of these, even in games that I really enjoyed otherwise. Weirdly, I can’t bring any to mind right now other than a few I found relatively acceptable. Most of them sort of delete themselves from my brain as soon as they’re done, but you know the sort. 100 dingy floors to reach the ‘real’ last boss and an ending that’s probably delivered via text with no accompanying cutscene. Bloodborne’s… Read more »

I have to take this moment to applaud the pun in the title, well done. And I also agree with the review. The lack of variation in terms of character build really lowers the usually very high replayability of From Softwares earlier action adventures. When I was seeing the end credits roll in Dark Souls, I had plenty of ideas for what type of character to try next. During the end credits of Bloodborne I just though “well, might try NG+ then…”. I guess the chalice dungeons were probably thought of being incentive for replaying, or to make NG+++ more… Read more »