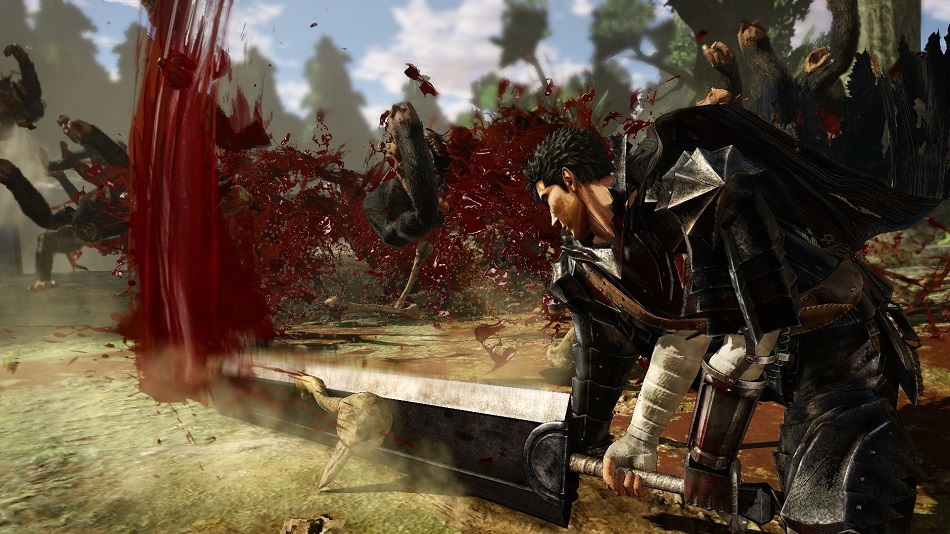 It’s fair to say that I’m a big fan of the Berserk franchise. For those unfamilair with the series, it’s a spectacularly bloody dark fantasy tale with some surprisingly excellent storytelling – especially given that the protagonist’s usual reaction to anything is to start cutting dudes in half with a massive sword that probably weighs about five hundred pounds. It’s a personality trait which should translate well to a Dynasty Warriors hack and slash, right?

Anyone who’s ever played a Musou title before will be right at home with what’s on offer here. The player is dropped into the middle of a battlefield filled to the gunnels with foes and given certain tasks to accomplish, ranging from simply murdering everything in sight to breaking open escape routes for allies or annihilating strategically-important targets such as catapults and  siege engines. The player will be often put in charge of main character Guts during the story mode, through rarely the option to control one of his allies will also present itself.

The story is mostly told through sizable anime cutscenes ripped straight out of the recent Berserk movie trilogy, though there’s some obvious censorship in effect. Lots of horrible things still happen, but intestines slopping out of torsos are often cut out and all nudity is blurred. Later on as the narrative extends beyond the scope of these movies, the developers introduce some largely decent original CG cutscenes to let players know how things are progressing. there are also some terrible in-engine sequences where the animation for character models is practically nonexistent.

On the battlefield, most enemies don’t stand a prayer of a chance against Guts and pals. They exist simply to be massacred en masse, letting players rack up dozens of kills in the blink of an eye. That said, enemy officers can withstand getting smashed in the face reasonably well, and then boss encounters pop up from time to time. The most remarkable of these are the Apostles, which are hulking monstrosities that can take a real pounding before they drop.

Aiding Guts in his fight to pulverize every living thing is an arsenal of continually-upgrading weapons. As in the source material, his circumstances continually change as the storyline develops, so he goes from having a couple of basic throwing knives to carrying around a giant cannon and some other assorted knickknacks like a repeating crossbow and improvised hand grenades. 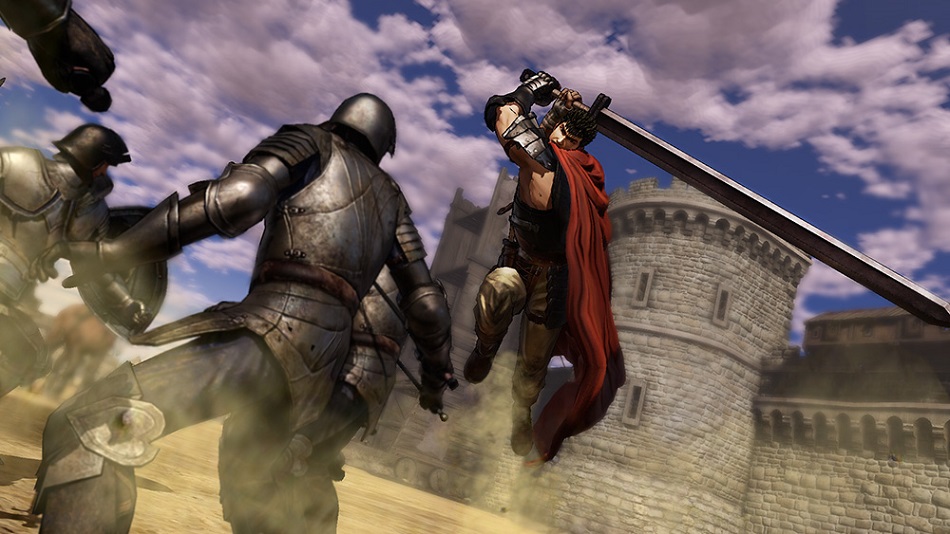 Berserk and the Band of the Hawk is a pretty easy game overall, with Guts nearly always having a clear advantage over the enemy forces he comes across. The path to victory is simplistic – annihilating cannon fodder fills up a Frenzy gauge which allows him to start dishing out some serious pain and then fills up his Death Blow gauge. This allows for a massive sweeping attack that will level anything in his path, or once a certain set of armor is obtained, the ability to transform into a bloodthirsty force of nature that goes seriously crazy. It’s an enjoyable gameplay loop, though it does wear thin over the fifteen to twenty hours of the story mode.

With all that said, I do have to point out that the Femto battle is absolute bullshit. Whoever thought that a boss encounter which frequently slows the player’s movement speed by half while chucking tornadoes at them should be frog-marched into the nearest staff room and given a stern talking to.

Berserk and the Band of the Hawk also, unfortunately, continues the Koei Tecmo tradition of inferior translation work on their niche titles. It’s never impossible to tell what’s going on, but it certainly lacks grace and fluidity. A little quality control would have gone a long way towards eliminating the typos and grammatical errors scattered throughout.

Once the campaign is complete, players can also choose to revisit cleared stages in Free Mode so they can try out other playable characters such as elegant fencers Griffith and Serpico, spellcasting witch Schierke, or the raging bestial mountain that is Nosferatu Zodd. It’s an interesting diversion, though returning to completed stages lost its allure quickly.

There’s also an Endless Eclipse mode which has substantial rewards associated with it – clearing the campaign allows its deepest depths to be reached, with bonuses such as character skins and additional characters handed out for reaching certain milestones up to a hundred floors down. Checkpoints unlock every twenty levels, and all playable characters have their own rewards. It’s a decent addition to the package, but there’s not a huge amount of variety to be found within.

…And that’s about the gist of it. It’s certainly not the best way to experience the Berserk saga for the first time (I’d recommend the original manga or 1997 anime series instead) and it’s not the best example of a Musou game, but for established fans of Berserk who fancy engaging in some rampant slaughter, it should do the trick. Rating: 5.5 out of 10

Disclosures: This game is developed by Omega Force and published by Koei Tecmo. It is currently available on PS4 and PC. This copy of the game was obtained via publisher and reviewed on the PS4. Approximately 17 hours of play were devoted to the single-player mode, and the game was completed. There are no multiplayer modes.

Parents: According to the ESRB, this game is rated Mature and contains blood and gore, intense violence, language, partial nudity and sexual content. It’s a pretty brutal franchise, and whilst some of its excesses are toned down a bit for this release, it’s still a bloodsoaked journey throughout with some pretty nasty stuff happening to all involved.

Deaf & Hard of Hearing Gamers: The dialogue is all subtitled and most of the warning noises have accompanying on-screen prompts.