Moe as Can Be 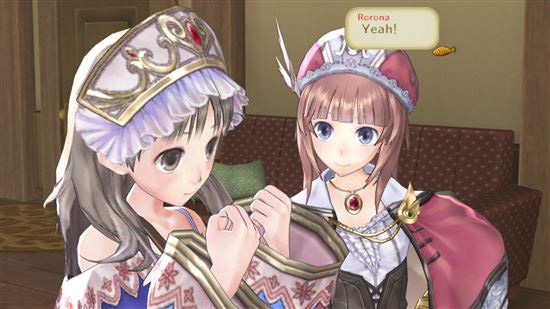 HIGH It's beautiful and charming.

LOW The rigidly enforced time limit for getting things done is way too harsh.

Totori Helmold has a problem. Her mother, the most famous adventurer in all the land, left on yet another exciting adventure a few years back… but apparently she forgot about the part where she's supposed to return home at the end.

As time's gone on, everyone's given her up for dead.

Everyone, that is, except for little Totori. She's determined to follow in her mother's footsteps as an adventurer and find out what's happened, despite having the physical constitution of an elastic band and the clumsiness of a great, heefing ox attempting to drink from a finely wrought teacup.

The odds aren't exactly in her favor.

Totori does have one advantage however; she's one of the only people in the world to have shown any aptitude for alchemy, even if half her attempts end up with unintended explosions tearing her lab in half. As such, Atelier Totori is more than a simple romp through uncharted lands—it also places emphasis on creating the equipment that Totori (and chums) will need to survive their trials.

Despite the impressive setup regarding her mother, Atelier Totori isn't really about a grand adventure. It's all about the day to day minutiae—heading off to the capital to score an adventuring license, for example, or simply having a bit of a chinwag with friends. It's a refreshing change of pace from heading off to stick a sword up the Demon God Nosferatu's nostrils or whatever, and proves bizarrely absorbing.

For example, Totori is full of overly-emotional stereotypes who burst into tears at the first angry word, or manly knights with scary faces who inadvertently terrorize the populace. However, they're all presented in such a way that makes these interactions curiously adorable rather than irritating as Totori attempts to guide their lives into a great big fuzzy ball of friendship.

It's probably fair to issue a warning about Totori now—for those weaned on the current generation of gaming (i.e., those who've learned to distinguish the subtle variations in massively overused browns and greys) Atelier Totori's probably going to burn their eyeballs into husks with its vibrant palette. 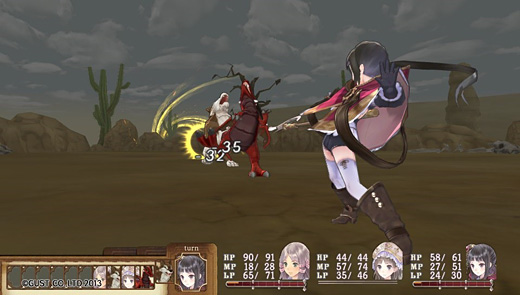 This rich world is absolutely stunning from an artistic standpoint, and the subtle joys of skipping through fields collecting herbs has quite possibly never looked so good. The framerate can be a little temperamental at times, but other than that, this game is a beautiful shining beacon of light for those who think so-called "realism" in games can go tumble off a cliff. The design is simply tremendous, from the character portraits right down to the environments themselves.

Adventuring tends to play out in the usual turn-based Japanese role-playing game fashion, clobbering monsters and stealing their bits for synthesizing with Alchemy later. Things get a bit more complicated here since materials also contain traits (such as enhanced attack power or guaranteed criticals) on certain enemy types, so it's important to learn how to mix these benefits together in an effective way.

Although not as vibrant as its visuals, the gameplay is enjoyable enough, and the game is quite pleasant overall. However, the biggest issue I have with Atelier Totori is a simple one: anyone aiming for the True Ending will be unable to achieve it without a walkthrough, as the requirements to trigger it are both incredibly well hidden and completely and utterly absurd. A team of superpowered scientists with noggins the size of Jupiter wouldn't be able to figure them out.

Making this bad situation worse, there's an omnipresent timer ticking down with every action Totori takes. Synthesizing items takes time. Getting into battles takes time. Traveling across the map takes time. Gathering materials from collection points—yep, that takes time too. Run out of time and it's game over, with one of several different endings playing out depending on Totori's previous actions—exceptionally annoying to finally unlock every location on the map, only to find that there's probably not going to be enough time left to explore them in any real capacity.

Some players probably won't bother their bumholes about this, but whenever I fail to get the best ending in games like these, I end up feeling like the biggest tool in the world. A filthy, irrelevant failure. Lower than the lowest form of scum. The slime on the sidewalk. Less human than Devil May Cry fanboys sniveling about the lack of whi… okay, scratch that last one. I'm not that bad. Nobody is. There's a New Game Plus option that allows players to keep their equipment and money from a previous journey, but everything else has to be taken care of again—a real drag.

Anyone with an aversion to cute will likely vomit themselves inside out before they've cleared the intro movie, puking their way into a catatonic state with inhuman haste, but for everyone there's a lot to love in Atelier Totori. It's huge, it's charming and it's just a shame that its strict, poorly defined timeline rubs some of its sheen off. That aside, it's almost ludicrously absorbing, beautiful to bask in, and a joy to play. Rating: 8.0 out of 10.


Disclosures: This game was obtained via publisher and reviewed on the Vita. Approximately 65 hours of play were devoted to the single-player mode, and the game was completed. There are no multiplayer modes.

Parents: According to the ESRB, this game contains violence, blood, suggestive themes, language, and use of alcohol. For those who really want their minds blown however, check out the Australian R18+ rating it got—"high impact violence" and "references to sexual violence" my arse.

Deaf & Hard of Hearing: There's unlikely to be any problem here—the majority of the dialogue is subtitled as standard, and the few times that audio cues in battles might require attention there's a visual indicator provided.