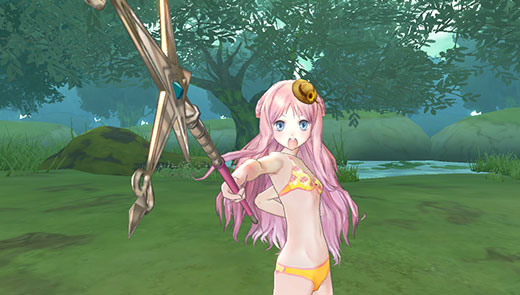 HIGH Forging ridiculously awesome equipment and putting it to use.

LOW The game is eternally marching towards an ill-advised cutoff point.

WTF Phonetically speaking, Esty Dee is quite possibly the most unfortunate name ever.

Princess Merurulince Rede Arls has problems. For one, her name’s too unwieldy to use in standard conversation—everyone just calls her Meruru. For another, she’s taken a keen interest in practicing the alchemical crafts. This wouldn’t be so bad except for the fact that her father, the King of Arls, is dead set against this pursuit and orders her to fall in line with her responsibilities as princess of the land.

A stubborn man, yet a fair one, he grudgingly allows her to continue her studies on one condition—that she use her powers to help develop the nation of Arls. If she fails to show sufficient progress in five years, then she must cast alchemy aside forever!

With a setup like this, it’s fair to say that the game isn’t exactly a dark and gritty tale of murder and revenge, and nobody gets dragged into the bushes before having their throat slit. No, this is about hopes, dreams, friendships and working for the betterment of the world alongside an outrageously excellent cast of characters. With most modern titles seemingly content to languish in their own overly-serious blood-crusted filth, the beautiful, upbeat world of Atelier Meruru

is a breath of fresh air. In fact, it’s more like an entire hospital’s supply of oxygen flushed through the medium itself.

As for actually playing it—it's also uncommonly excellent. Leaving the battles aside for a moment, a fair portion of the Atelier series involves sharpening the main character’s skills as an alchemist. Decent equipment can occasionally be found in the field, but masterpieces are only wrought by Meruru’s own hands.

Performing alchemical tasks for the unworthy plebs of her fine nation earns Development Points which can be funneled into public works projects. This will make life easier, not just for the common folk scuttling around, but also for Meruru by granting things like passive bonuses for increased experience, or opening up additional trade routes for more equipment and goods in the markets.

Combat’s of the turn based variety, though enemy encounters can (thankfully) be spotted on the map and avoided if need be, and the fights are anything but plodding—they actually play out quickly and in razor sharp style. These battles are magnificently animated and feature some of the most exquisite super-move animations to be found anywhere. More importantly, all necessary information is clear to see and right where it needs to be—turn orders for all characters are clearly marked out, for example.

Don’t be fooled by the cute aesthetic of the game though. Some of these enemies can be devastatingly difficult for those who haven’t been intelligently upgrading their arsenal as they go. Those in need will find that a quick jaunt to the workshop usually evens the odds out nicely. Other times, it may be worth taking a detour to power up before giving it another bash. The cycle of heading out, discovering new lands and materials, and then constructing new items and facilities is never less than an absolutely joyous experience, and in ninety hours of play I never once got bored with it—save perhaps during a few of the more difficult alchemy stints.

See, while the synthesis concept defines the series and helps set it apart from the crowd, occasionally it becomes just a little too involved for its own good. Juggling cost points, item materials, their type, quality and a bunch of other variables is largely fine for churning out decent quality items, but when attempting to create the very best equipment available, it can become mind-crushingly complicated. At one point my head literally exploded trying to process the mountains of relevant information, and I spent days wandering around headless, scaring the bejeezus out of passing children. Eventually, a kindly stranger pointed out the geysers of blood gooshing out of my neck and helped me put things right.

In spite of decapitating myself with information overload, the feeling of finally managing to tweak everything so that all those traits and skills fit onto a single ridiculously powerful accessory or weapon? Satisfying. Insanely satisfying.

However, Meruru's time limit is the worst. At the end of the five years previously mentioned (or earlier for underperforming princesses) control will be unceremoniously whisked away from the player and it’s off to whichever of the multiple endings they qualify for. It doesn’t matter if they're moments away from synthesizing the perfect armor or on the way to a hotly-anticipated climactic showdown, as soon as the timer runs out, that’s it. Game over. Thanks for playing, now sod off.

This limit is a monumentally stupid decision in a game filled with great ones, and I’ve no idea why Gust continues to think that this is a good design choice. While the New Game Plus mode has the decency to save what characters are equipped with alongside the contents of Meruru’s wallet, every location is locked off, all the unearthed materials disappear, and every story beat must be triggered once more. Even with the option to rapidly skip text, it’s a bizarre, unfriendly and completely unnecessary feature to force on players who are likely just getting into the excellent endgame content by the time it whisks them back to the start.

This said, even if the game spat in my face every time I started it up, I’d still recommend it without hesitation. It’s a masterful adventure that offers an almost ridiculous bounty of content for those who invest some time in it. Atelier Meruru

is brilliant, and only a coal-hearted misanthrope could fail to be utterly charmed by it. This entry cements my opinion that the Atelier Series may well be the best-kept secret in the entire JRPG genre.


Disclosures: This game was obtained via publisher and reviewed on the Playstation Vita. Approximately 90 hours of play was devoted to single-player modes (completed 2 times) and there are no multiplayer modes – just a near ludicrous amount of singleplayer content.

Parents: According to the ESRB, this game contains violence, blood, suggestive themes, language, and use of alcohol. It's all presented in an amusing, upbeat fashion, however, so it's unlikely that anyone will take offense at the shenanigans contained within.

Deaf & Hard of Hearing: There are no issues on this front worth mentioning – all dialogue is accompanied by text and none of the gameplay systems rely on audio cues to work.